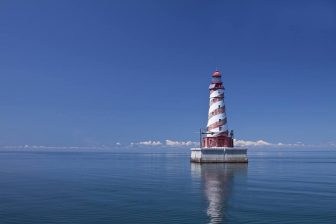 Renovation started this summer on a multi-year and multi-million dollar project to restore a Great Lakes icon and, for the first time, open its doors to the public.

White Shoal Lighthouse is an offshore lighthouse 20 miles west of the Mackinac Bridge. It’s not visible from land and is a rare sight for boaters, but its red and white, barber pole stripes make it a popular memorabilia item throughout the Great Lakes. Michigan even featured the light on fundraising license plates until private owners purchased the lightstation for $110,000 in 2016. The sale was finalized in June.

The new co-owners, Brent Tompkins and Mike Lynch, with the White Shoal Light Historical Preservation Society, said they hope to convert the lighthouse into a bed and breakfast with a first-floor museum and gift shop that people can visit from Memorial Day to Labor Day.

They said the goal is to restore the lighthouse to its vintage “1950s glory.”

“That place is one of a kind,” Lynch said. “The other ones are kind of like Alcatraz on water. They are not really pretty, they are not really stylish, but for that White Shoal one they spared no expense on it.” 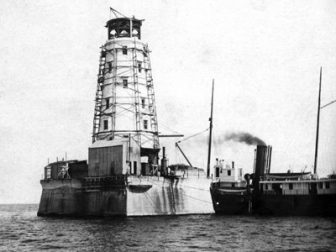 The men said it was a shame so few had seen it in person.

“We could have turned it into a cottage, but I like it and Brent loves it,” Lynch said. “He wants to turn it into something super cool and let everyone come and be a part of it, where some of the other guys are just making personal fortresses of them (lighthouses), and not sharing them with the world. He wanted to share it, and I did too.”

It’s a lofty project for the 11-level building, which is still an active navigation aid. The Coast Guard inspects the battery, solar panel and foghorn yearly. 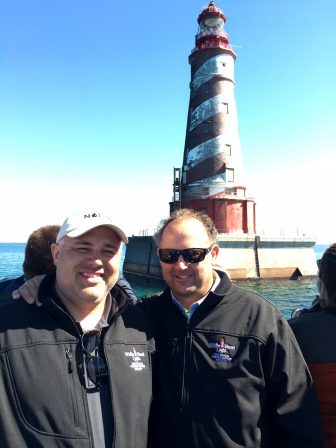 The red and white stripes are now faded. Birds perch on the lighthouse, leaving behind tell-tale droppings of their successful meals, Tompkins said. Bridge spiders, fortunate to catch a strong wind from the shore, have spun webs of nature-made security around the long-abandoned structure. It’s much different from the picture of the pristine White Shoal Lighthouse he had on his wall as a child.

Inside, layer upon layer of lead paint chips from the wall. The Coast Guard removed doors for ventilation, but Tompkins said the trim and plaster work are in good condition.

“It seems like a huge money pit, and this is something I knew,” Tompkins said. “It was going to be difficult, and that was the part that drew me to it — the engineering challenges and the fact that nothing is going to be easy. Everything takes three times as long as it would on land, at least.” 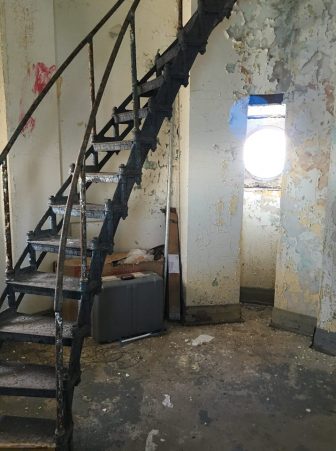 Tompkins said the lighthouse holds “every smell known to man,” including dampness, fish and bird droppings and the faint odor of the diesel fuel the Coast Guard used to run generators.

The lighthouse has five bedrooms within the 5,000-square-foot interior. The stairs can be climbed without entering bedrooms, which is unique for Michigan lighthouses, Tompkins said.

“The lantern room at the top is spectacular,” he said. “When you are in it, it is absolutely enormous. We could actually fit probably 20 people in the lantern room itself.”

The owners plan to offer boat tours for daily visitors. They’ve been collecting old photos from previous lightkeepers for the museum. They say they hope the pictures and the men’s stories will also guide the restoration.

Tompkins and Lynch, who both work as builders, said the condition of the lighthouse makes it a huge undertaking, and the project will take years to complete.

The Coast Guard abandoned the White Shoal Lighthouse and others in the Great Lakes in the 1970s after technology and dredging made manned lightstations unnecessary.

Many were gutted. Contents, like cabinets and radiator covers, were thrown into the lakes in a practice known as “vertical disposal,” according to Terry Pepper, a lighthouse historian and director emeritus of the Great Lakes Lighthouse Keepers Association.

“When you’ve got a lighthouse sitting out 20 miles in the lake and you are removing things from it, a lot of the stuff wouldn’t serve any purpose, so it was not uncommon for those to be dumped,” Pepper said.

Pepper visited the White Shoal Lighthouse with a research crew in 2012. He said his organization discussed bidding on the lighthouse when it came up for sale.

“If anybody thinks about what is a Michigan lighthouse, well dammit, White Shoal is the quintessential lighthouse, and we should step up and try it,” Pepper said he told his organization at the time.

“Everybody said we would love to, but we have a hard enough time coming up with large enough amounts of money that we need to preserve and restore the two lighthouses that we already own. It would be ridiculous to think we could take on that type of project, he said. The challenge ahead of those guys is pretty damn large.”

Pepper said the Great Lakes Lighthouse Keepers Association estimated restoration would cost the organization about $2 million to take it on.

“The thing that those guys have going for them is they have a group of guys that have a lot of abilities, and they are a very motivated and relatively young group,” he said. “A lot of the people on the board of the association, we are all in our 60s and 70s, so we are trying to get more young people involved, but those guys are all in their 40s and 50s.

“They’ve got the chutzpah and physicality and hopefully the money to do it,” said Pepper, who’s provided guidance to the new owners.

His association, with the help of hundreds of volunteers, spent more than 20 years renovating the St. Helena Island lightstation and site, which is 10 miles offshore from Gros Cap, in Lake Michigan.

Pepper said the location presented similar challenges because of the high waves and shallow water. Work crews couldn’t dock, so they anchored 100 feet from shore and transferred building materials by Zodiac rafts.

The White Shoal Lighthouse also lacks a dock, which makes it dangerous to leave boats against the lighthouse’s concrete base. Tompkins said repairing the crane to lift boats from the water is a priority.

“Then as long as we’ve got supplies we can stay indefinitely,” Tompkins said. “That’s really the only way we are going to get anything done because usually we are running out, we are spending three or four hours on the station, and we are getting chased off by the weather.” 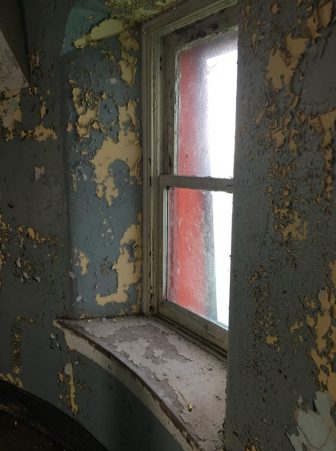 The lighthouse recently passed structural evaluations. Other priorities include asbestos and lead paint removal. Tompkins said they hope to repaint the faded red and white stripes next summer.

“It really needs a paint job to get the excitement going,” he said.

Tompkins said it could take more than five years and $3 million before the lighthouse is ready for guests.

“It’s going to take an army of people” and an abundance of donations to be successful, he said.

The White Shoal Light Historical Preservation Society recently launched a Facebook page with images of the restoration efforts. It includes historic photos, new videos and underwater pictures of what divers said is a newly discovered shipwreck.

The organization will begin fundraising soon, the owners said.