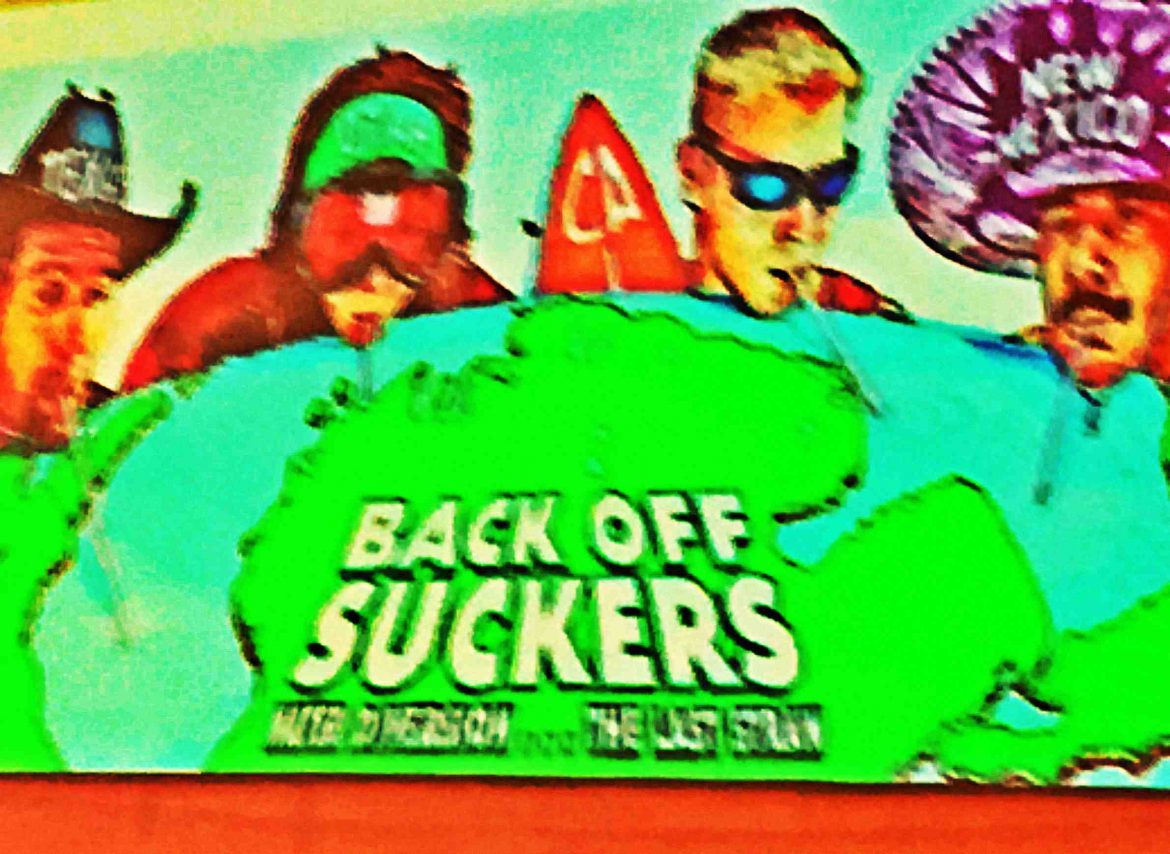 An 2001 billboard placed in Michigan featured offensive caricatures representing Texas, Utah, California and New Mexico to illustrate concerns about pumping Great Lakes water to the American West. Image: Illustration based on photo of billboard by Citizens for Michigan’s Future

This story originally appeared on WisContext and is republished here with permission.

Two centuries of urbanization and industrialization around the Great Lakes have often hinged on tension among those who’ve desired their extraordinary supplies of fresh water. The lakes and the surrounding watershed contain nearly one-fifth of the surface freshwater on earth, and currently about 40 million people in the United States and Canada use their waters. The eight Great Lakes states — Illinois, Indiana, Michigan, Minnesota, New York, Ohio, Pennsylvania and Wisconsin — and the provinces of Ontario and Quebec collectively form a $4.7 trillion economy, the fourth-largest in the world. It’s no wonder that people across North America and around the globe want in on that water.

The Great Lakes states and provinces rely on a binational agreement to try and keep Great Lakes water in the region. Stateside, that agreement takes the form of the legally binding Great Lakes Compact, which went into effect in 2008 and relies for enforcement on both state governments and a regional body comprised of the eight Great Lakes governors. With a few specific exceptions, the Compact bars public utilities or private interests from taking Great Lakes water out of the lakes’ hydrologic drainage basin — a process known as diversion. That limit is in place because people within the region are all too aware of how attractive that water, and the opportunity it represents, are to others who live outside of it. A series of controversies over the past 200 years or so have driven that reality home.

The lust for Great Lakes water is only going to come from more corners over the next several decades, as journalist Peter Annin explained in an Oct. 22, 2015 talk at Monona Terrace in Madison. Co-director of the Mary Griggs Burke Center for Freshwater Innovation at Northland College in Ashland, he is the author of the 2006 book The Great Lakes Water Wars which, along with Milwaukee Journal-Sentinel reporter Dan Egan’s 2017 book The Death And Life Of The Great Lakes, is one of the seminal texts on the lakes’ political and environmental history.

The talk, recorded for Wisconsin Public Television’s University Place, came as the city of Waukesha was in the midst of its ultimately successful bid to tap into Lake Michigan for its drinking water supply. Because Waukesha is located entirely outside the Great Lakes Basin but inside a county that straddles its border, the city’s request was an important test for a provision of the Compact that allows such communities to use the water, dependent on unanimous approval from all eight regional governors. The request, approved in June 2016 has proven to be the most controversial Great Lakes water issue of the decade so far, rivaled only by Swiss corporation Nestlé’s bottled-water operations in Michigan and Taiwan-based electronics manufacture Foxconn’s interest in sourcing Lake Michigan to supply an in-the-works factory in southeastern Wisconsin.

Annin touched briefly on the Waukesha diversion in his talk, but mostly focused on how bold moves by both public and industrial entities have shaped Great Lakes water politics, and how the increasing instability of water resources around the U.S. and the world will shape those politics in the future.

The Battles That Shaped Great Lakes Water Politics was originally published on WisContext which produced the article in a partnership between Wisconsin Public Radio, Wisconsin Public Television and Cooperative Extension.

2 thoughts on “The battles that shaped Great Lakes water politics”