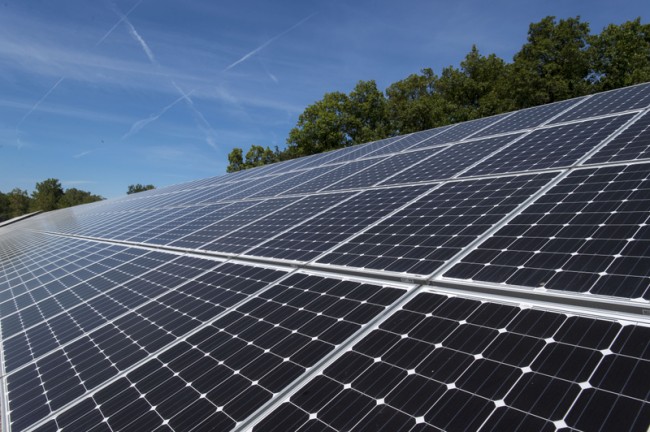 As solar energy soars in popularity in Michigan, solar leasing has become a  profitable option for farm owners.

“That’s considerably more than what they would be making from growing crops, grains and corn,” Gould said. “The current market price for those commodities doesn’t approach $1,000  an acre.”

However, owners need to give up use of that land in exchange for signing up, he said. “The lease agreement can be up to 25 to 30 years, so that land is no longer in production.”

Michigan gets about one-quarter of its electricity from renewable sources, including solar, according to the U.S. Energy Information Administration.

It’s hard to predict whether a solar lease undermines the value of farmland, said Matthew Kapp, the government relations specialist at the Michigan Farm Bureau.

“There are many variables that contribute to value. Variables such as market conditions, location, soil type, as well as land use, all play a role in determining farmland value,” Kapp said.

“Each farmer needs to evaluate what’s the best use for their land,” he said. “Some farmers would say solar energy is a positive and some would say it’s a negative, depending on their own perspective.”

To some extent, taking land out of agricultural use will reduce production, said Richard Harlow, the manager of the Farmland Preservation Program at the Department of Agriculture and Rural Development.

The program aims at preserving farmland for agriculture. It provides tax benefits and exemptions from various special assessments, according to the department.

Harlow said, “Farm owners in the program are not permitted to put solar panels on the farmland.”

Michigan has 3.3 million of its 10 million acres of farmland in the preservation program, he said. “Renewable energy is good, but we are not making any new farmland and we need to preserve the farmland we have.”

Agricultural solar energy development is still in the early stage, said Charlotte Jameson, the director of energy policy and legislative affairs at the Michigan Environmental Council.

“We are not really at the point that we were need to worry about overuse of farmland and solar,” Jameson said.

In Michigan, the price of solar panels and related equipment declined 55 percent over last five years.

However, it produces only 0.1 percent of the state’s electricity.

Traverse City opened its M-72 solar project last October with the intent to power 100 percent of city operations with renewable energy by 2020.

The project is a collaboration among the city, its municipally-owned utility and Heritage Sustainable Energy, a private company.

It is under a solar lease agreement on former farmland.

“This year the city will continue to focus on energy efficiency measures — building by building — and also work with Traverse City Light & Power on additional opportunities to procure renewable energy,” said Sarna Salzman, a member of the Grand Traverse County Planning Commission.