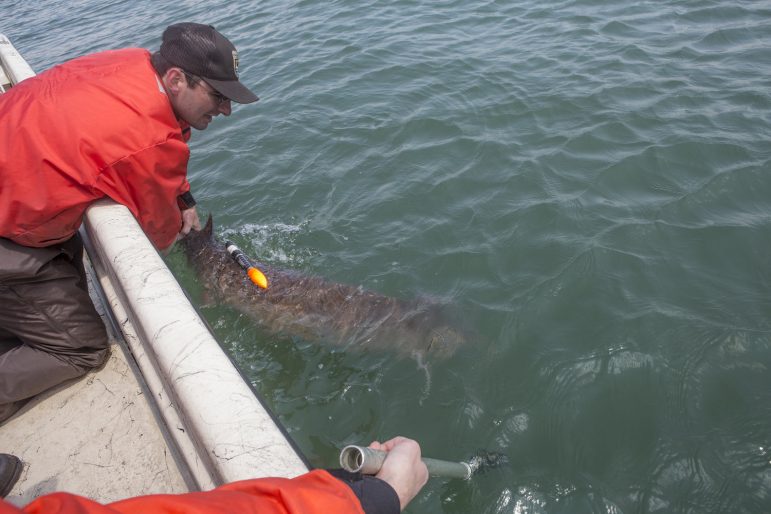 Researchers  from the Shedd Aquarium and the  U.S. Fish and Wildlife Service studied lake sturgeon (Acipenser fulvescens) in the upper and lower Niagara River, which runs between Lake Erie and Lake Ontario.

The tags are attached with heavy-duty line, similar to fishing line, that is inserted into the fish’s back. The 15-inch tag is then hooked to a swivel on the end of the line, where it floats freely, inches above the animal’s back. The size of sturgeon make them good candidates for the technique.

“If you’re attaching a satellite tag, you have to make sure that it’s not going to interfere with the animal at all,” Kough said. “So we knew that it wouldn’t interfere with lake sturgeon, but it might if we were to put it on a little bass or something like that.”

It’s not necessarily an easy task to tag the fish.

Lake sturgeon are usually docile, but their behavior can change with the weather, said Fish and Wildlife Service biologist Dimitry Gorsky, who was part of the field research team.

“When the temperatures get a little bit warmer they tend to get a little more ornery, and you can get tail whipped pretty bad. It hurts pretty good,” he said. “If they want to flail around we let them do it, and then when they stop, we will go back to working on them, because they’ll always win if you are going to wrestle with them. They’ll always win.” 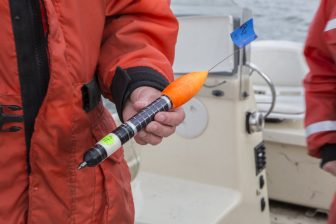 The satellite tags send summary information on the fish’s behavior to satellites. The tags eventually “pop-off” of the fish and float to the surface. They send a signal so scientists can retrieve them to learn more specific information.  Other researchers implanted the fish with microchips, similar to those used on pets, to gather long-term location information.

The 25 sturgeon that the researchers monitored were most active between sunset and sunrise.

Gorsky said that information could help protect fish in Great Lakes shipping areas such as the St. Lawrence River and St. Clair-Detroit River system, where ships may kill lake sturgeon.

“Those two river systems are interesting because they have commercial shipping traffic,” Gorsky said. “We haven’t seen a lot of information in the Great Lakes about ship strikes with sturgeon, but it has been talked about with the Atlantic sturgeon in some of the coastal rivers, so it’s certainly something that we would be concerned about and wanting to make sure that it isn’t an issue.” 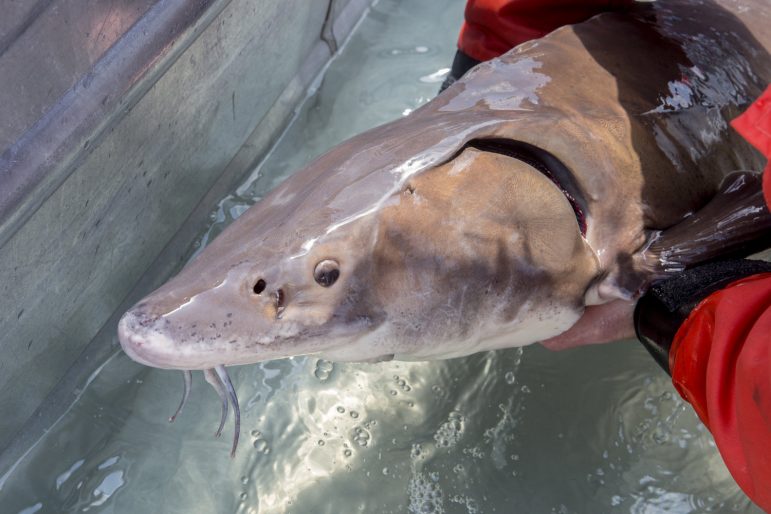 Limiting the depth of overnight freighter movement by controlling weight load may be one way to prevent collisions between freighters and fish, researchers said.

Threats to sturgeon are a significant concern. They have lived in the Great Lakes for millions of years, according to fossil records. But the prehistoric-looking fish is now considered endangered or threatened throughout the Great Lakes basin because of overfishing in the early 1900s. Commercial fishing in Lake Erie removed millions of pounds of lake sturgeon a year, Gorsky said. Dam building also had a negative impact.

The number of lake sturgeon is increasing, said Phil Willink, a senior research biologist with the Shedd Aquarium.

“If we had tried to do this project 20 years ago, we probably wouldn’t have caught enough to do the project, so it is interesting that they are making a comeback in that harbor,” he said. “That’s a good sign.”

“The more data we get, the more comprehensive view we have of their life history and that puts us in a better position to protect them, and there’s still a lot to learn,” Willink said.

The study is published in the Journal of Great Lakes Research.