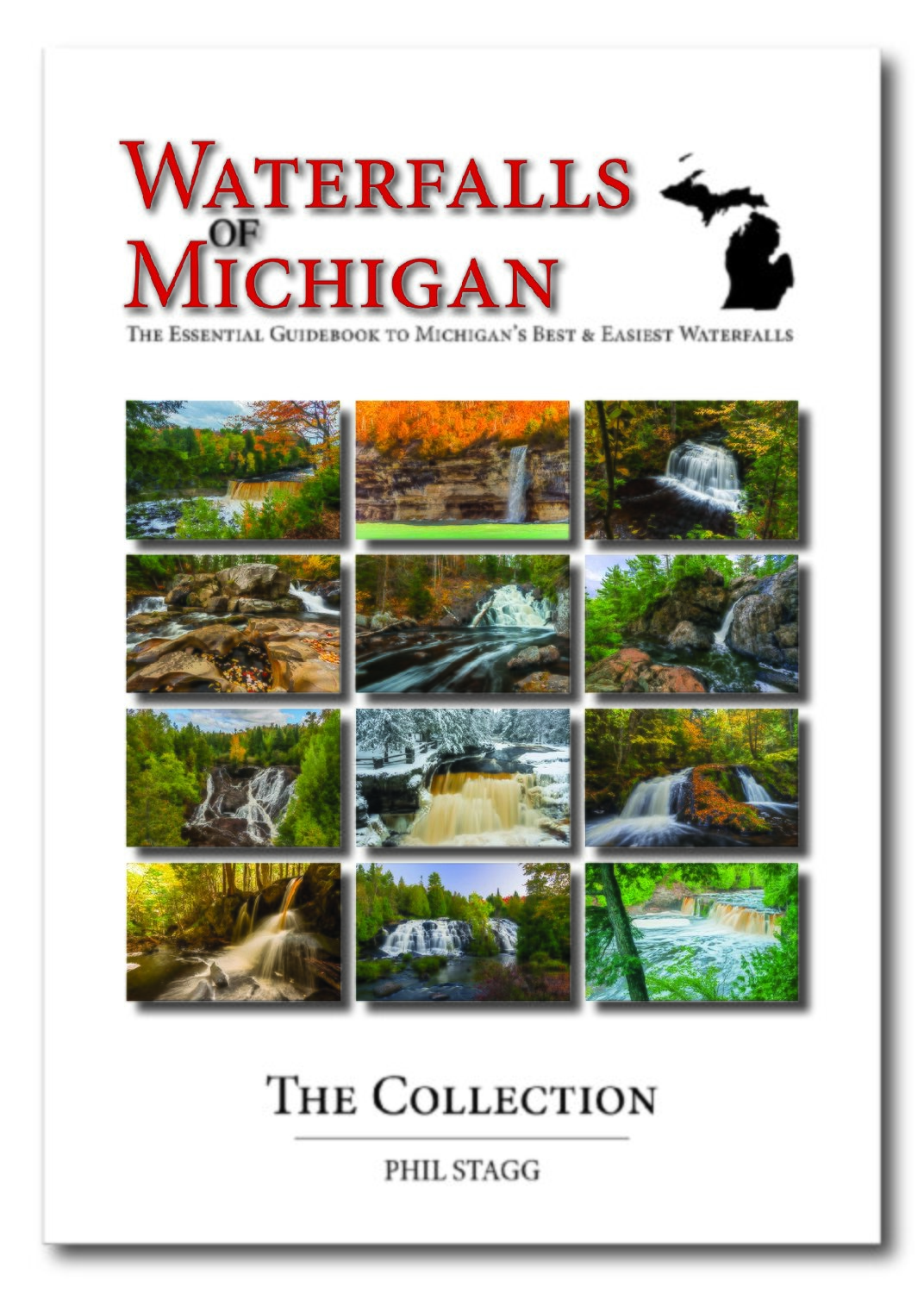 His latest book, “Waterfalls of Michigan: The Collection” is the fifth in a series documenting Michigan’s waterfalls. It contains the most spectacular and easiest-to-reach waterfalls in the state.

And Stagg has been to every single one.

All photos, maps and descriptions in the book are his own. He’s walked every trail, some many times over. He’s taken GPS coordinates showing the exact location of each waterfall.

“I don’t think we realize the rugged beauty that exists in the state,” Stagg said. “That’s become part of my quest, to open the eyes of so many Michiganders who are not familiar with what lies north of the bridge. I hope that they will appreciate the UP, maybe more than they have.”

There are 202 waterfalls in this book, most of them located in the Upper Peninsula. The full series includes more than 600.

Each waterfall is accompanied by a picture, information on hiking conditions, danger level from walking on uneven or icy ground, elevation change and a short description of the falls. Stagg also rates each waterfall on a “must-see” scale from 1 to 10 and marks the most spectacular sights with a green square.

“Waterfalls of Michigan: The Collection” contains the most beautiful and easiest-to-reach waterfalls of the other four books in the series. 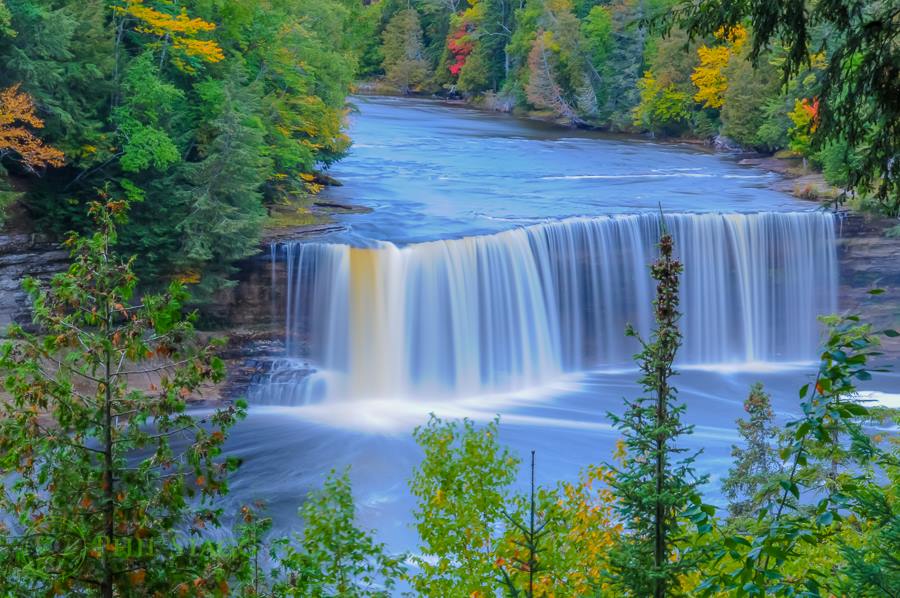 The photo of Tahquamenon Falls that started it all. Image: Phil Stagg

The collection got its start in 2008, when Stagg took a photo he loved at Tahquamenon Falls in Michigan’s Upper Peninsula. That photo inspired him in 2009 to seek out other Michigan waterfalls.

“I was just trying to find some at that point,” Stagg said. “But then when the idea of actually creating a book gelled in the mind, I thought, okay, let’s get serious about this, and try to actually get to all of them instead of finding just the nice ones.”

It took Stagg nine years to gather his pictures and field notes. The first book in the series came out in 2016, the other four following soon after.

You’ll also find several that Stagg named himself – including one in the Porcupine Mountains. Stagg stumbled across it while hiking with his oldest son.

“He yelled at me and said, ‘Dad, there’s a waterfall! You need to come up here!’” he said. “I finally said, ‘Okay, fine!’ So I went up there and sure enough, there was this cute little waterfall. I called it Insistence Falls because he insisted that I go up there.” 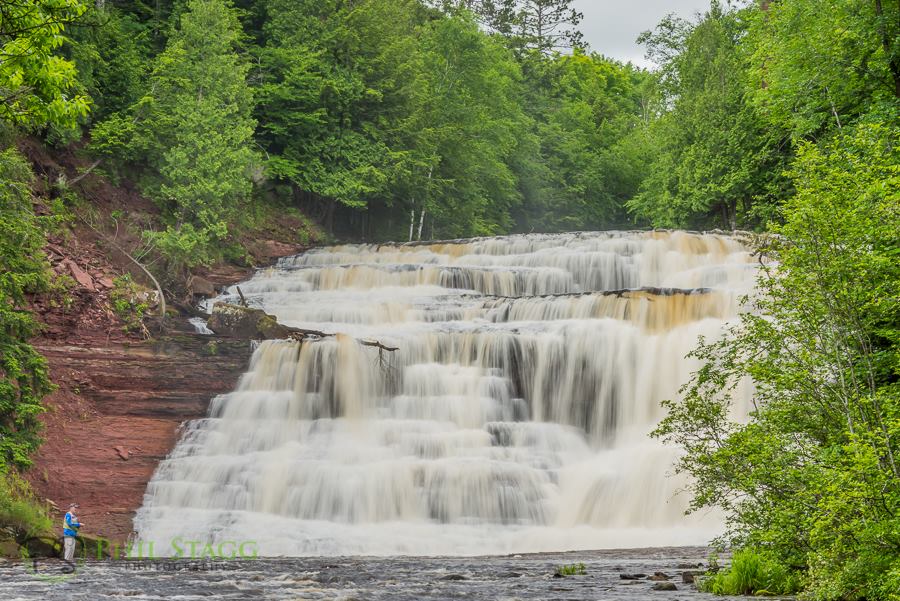 Stagg sometimes had to rely on GPS coordinates or word of mouth to find the waterfalls. When he arrived, conditions weren’t always right for a good picture and he’d have to go back later.

The search for each waterfall turned him into a hiker, he said. He hopes the same will happen to those who pick up his book.

“You can’t see it all, you can’t hear it all, you can’t smell it all from a picture,” Stagg said. “You have to get out there and experience it. The wind’s blowing and you’re hearing the water. You feel the moss along the sides of the river. There’s just so much more dimension to be seen than you can ever get with just a photo or two.”

Books in the “Waterfalls of Michigan” series have been sold across the country, from New York to Florida. Some people buy them to look at the pictures and remember their own vacations. Others plan their own hikes around the information Stagg offers.

They’re an introduction to something Michigan isn’t well known for – but perhaps  should be.

“Waterfalls of Michigan: The Collection” is available from MI Falls Publishing for $29.95. You can find the other books in the series and learn more about Stagg’s work at his website.