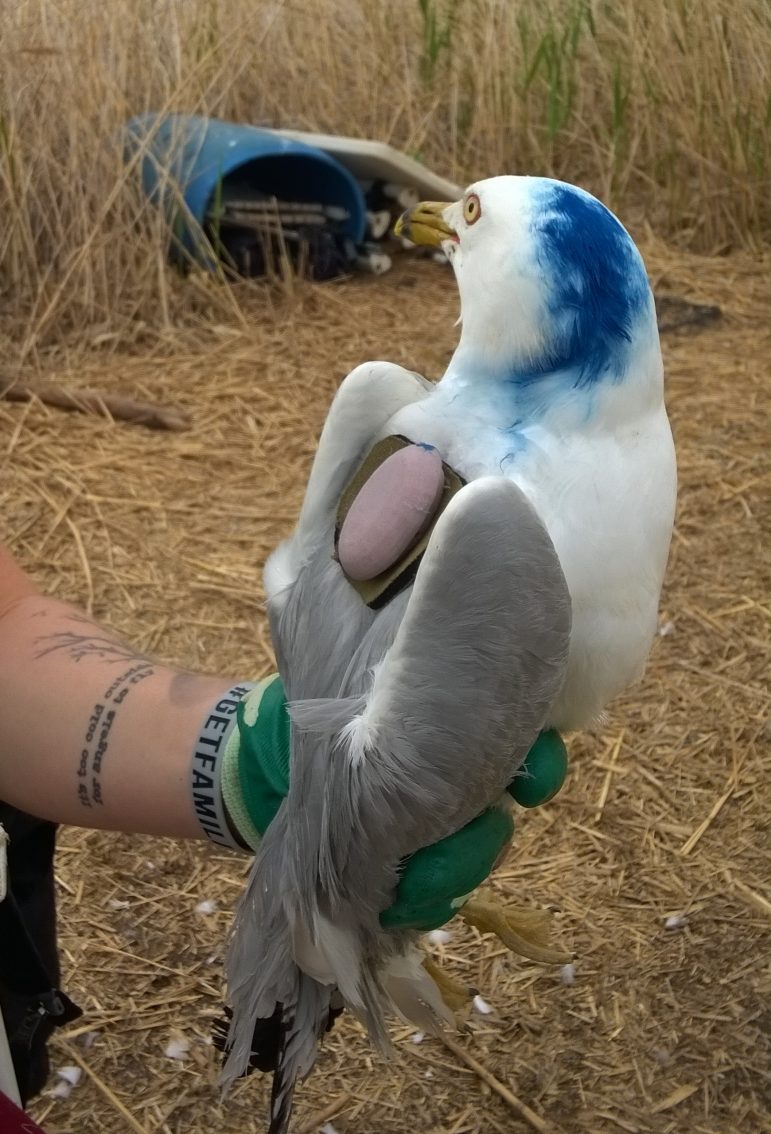 If you see gulls flying around Montreal wearing what appears to be backpacks–they are not headed to school.

These birds are helping scientists monitor the air for flame retardants.

The study challenges the idea that eating fish is the major way these chemicals contaminate terrestrial species, said Jonathan Verreault, an author of the study and associate professor in the Centre de recherche en toxicologie de l’environnement  at UniversitÃ© du QuÃ©bec Ã  MontrÃ©al.

Instead, it looks like the air carries the chemicals collectively known at PBDEs. The device strapped on the gulls is a miniature air-sampler. Air flows in one end and passes through a filter which traps tiny particles, Verreault said.

PBDEs are added to plastics, fabrics and cushion filling to reduce flammability, but can migrate out of the material into air and water, according to the recent study published in Science of the Total Environment.

The health risks from PBDEs include neurodevelopmental deficiencies, thyroid hormone issues and male reproductive effects, according to the toxicological profile for PBDEs from the US Toxic Substances and Disease Registry.

Most PBDEs have been taken off the market in the 2000s voluntarily by manufacturers, said Deb MacKenzie-Taylor, a toxicology specialist at the Michigan Department of Environmental Quality.

Though most were prohibited in Canada in 2006, a specific type of PBDE, known as DecaBDE, was not banned until 2015. Researchers thought that DecaBDE did not accumulate in the body, Verreault said. That is true for aquatic organisms. But they were looking at the wrong organisms.

Studies have since shown that the DecaBDE actually accumulates more in terrestrial organisms than aquatic organisms–meaning that in the extra nine years that DecaBDE was permitted, a reservoir of the flame retardant built up in the environment, Verrault said.

Science in a backpack

The idea of sticking the air-sampler onto gulls arose when a graduate student at UniversitÃ© du QuÃ©bec Ã  MontrÃ©al puzzled over a pattern of PBDEs in gulls, Verreault said.

The pattern of contamination did not match contamination in fish–meaning that the gulls were not exposed to PBDEs through eating fish, Verreault said. The levels of PBDEs were also much too high to be explained by a fish diet alone.

Researchers hypothesized that the birds were exposed from PBDEs in the air. That’s what prompted the idea of the bird backpacks.

The research group captured 24 gulls, strapped the air-sampler to them and tucked a GPS tracking device under their tail feathers,  Verreault said.

Three weeks later they recaptured the birds with fishing nets and remote-controlled traps. Then they cracked open the air-sampler and analyzed the filter and the GPS data, he said.

They discovered that the gulls frequently visited landfills, likely attracted by the open access to food waste, Verreault said.

Landfills have a lot of materials containing PBDEs. Often those materials are ground up and then disposed of at the landfill’s surface.

This means that the PBDEs are floating around in the air above the landfill and can be inhaled by the gulls or become stuck to their feathers and later ingested by the birds when they preen, Verreault said.

Because nothing deters the gulls from foraging at these landfills, it is likely that this is where much of the PBDE contamination comes from.

It is not just a threat to the gulls.

“Birds are very sensitive–they’re literally canaries in the mineshaft,” said Miriam Diamond, a professor in the department of earth sciences at the University of Toronto and another author of the study.

If gulls have access to the food, other wildlife such as raccoons and crows that forage in the landfills may also be exposed to PBDEs.

And the study has implications for people.

“It’s a human health issue as well,” Verreault said. “People living nearby may also be exposed, people working on sites–spend even more time than gulls on these landfills. They only wear helmets, which don’t protect against PBDE contamination.”

The human risk is uncertain, and it may not be large, MacKenzie-Taylor said.

“Gulls help generate ecological risk, but it may not translate to human exposure,’’ she said. “What the gulls would be exposed to is up close and personal at the waste.”

The average person is not living in the middle of a landfill.

The exposure of landfill workers would be less because their breathing zone is higher than the gulls, she said. Even a few feet can make a difference.

But, we won’t know for sure all of the risks until more research is done. Then researchers can bring their results to landfill managers, Verreault said.

Until then, what can be done to reduce exposure?

“To throw something away is such a misnomer–if it’s going to landfills, it is still going somewhere. It doesn’t ever simply go away,” said Melissa Sargent, the green living resources director at the Ecology Center, an Ann Arbor-based non-profit group that advocates for safer products.

If manufacturers were forced to take back their products for disposal, like some European countries require, it would force them to think about their whole life cycle, Sargent said.

Moreover, she said, we need to evaluate if we really need these chemicals in the first place.

It is easier to control for flame retardants at the beginning of a product’s life than trying to manage the waste once a product already has a hazardous chemical in it.

“Preventing dust from coming out of the landfills is quite an endeavor,” Verreault said.

For now, the research team is determining the location and duration of the gulls’ foraging in the landfills to determine if they have higher levels when they visit more often and for longer periods.

They are also attempting to modify the passive air-sampler to calculate how much PBDE is in a unit of air so they can better inform regulatory agencies.

The bird-borne air sampler could pioneer a new way of keeping on top of such threats–it’s a great non-invasive monitoring method, Diamond said.