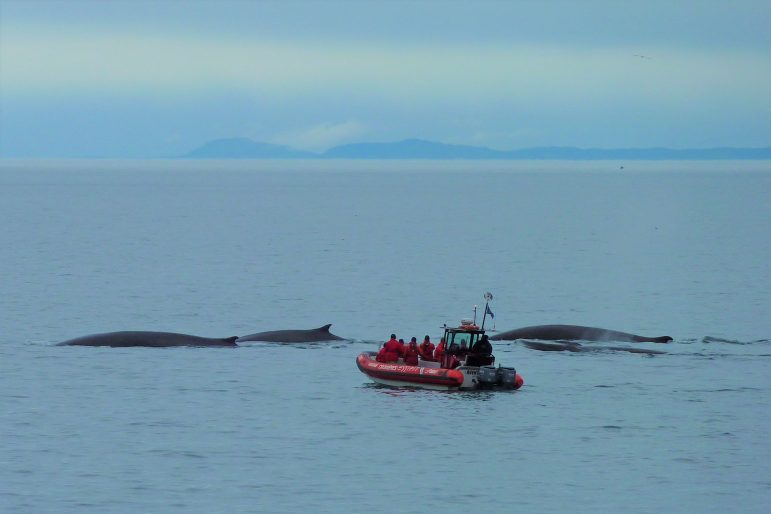 The St. Lawrence Estuary in Quebec is a summer hotspot for whale watching. Image: Hans Bernhard

Editor’s note:  This is the last of a daily series featuring one natural attraction in a Great Lake state or nearby province. Of course, with more than 4,500 miles of coast and a landscape carved by glaciers, each state and province has many more than one great natural feature. So nominate and make the case for your favorite in Quebec in the comments below.  And stay tuned: We’ll soon post up your nominations and poll you on the region’s greatest natural feature.

Quebec isn’t technically within the Great Lakes basin. But the nearby neighbor borders the St. Lawrence River which drains that basin. And it deserves a nod for a unique natural feature that’s one of the largest in world and formed by all that fresh Great Lakes water clashing with the ocean’s inflow.

The St. Lawrence flows between Quebec and parts of New York and Ontario, creating a massive estuary–a place where freshwater merges with saltwater.

Organic matter and fish are abundant in estuaries. That makes them a lure for aquatic mammals such as seals, dolphins and whales.

Thirteen species of whales swim upstream to feed and reproduce between May and October. They include sperm, humpback, finback, minke and blue whales. Blue whales are the largest species and can grow to 100 feet and 300,000 pounds.

The estuary’s most common whales are belugas, which tolerate both fresh and saltwater and live in the estuary year round. Belugas are a small. Males grow up to 18 feet. Females are often the size of dolphins. 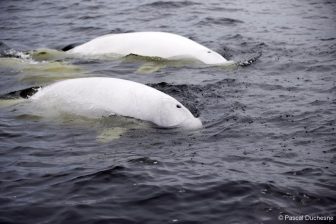 The whales are impressive, said Katie Lepage, the manager of tour and travel sales with Croisiers AML, a Quebec-area cruise agency.

“(It’s) always breathtaking, even for people who’ve been whale watching for years,” she said.

The whales are sometimes seen from shore, but large boats, inflatable zodiacs and kayaks offer a better vantage.

Some whales are endangered or at risk. The Canadian government has regulations for whale watching. Boats are not allowed to approach them, so binoculars are recommended.

“Some days visitors are disappointed because they thought they would see them jump all around our boat, which is very rare,” Lapage said.

About 85 percent of whale watchers are from Quebec, said Camille Tremblay, the project manager for international marketing at Tourisme Charlevoix, in Quebec. 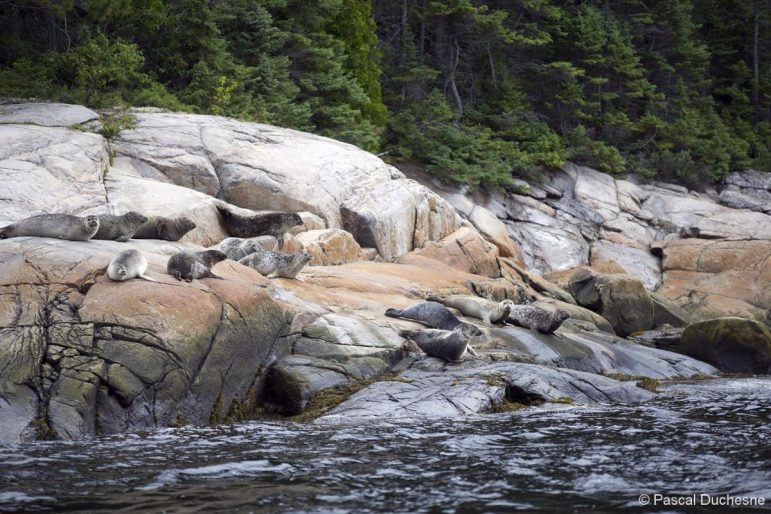 That makes whale watching within the St. Lawrence River an unexpected marvel for many in the Great  Lakes region.

“It is wildlife, nature, pure beauty,” Lapage said. “I get goosebumps every single time, and visitors do too.”

Dolphins, seals, porpoises, eagles and other wildlife are also seen within the estuary’s system.