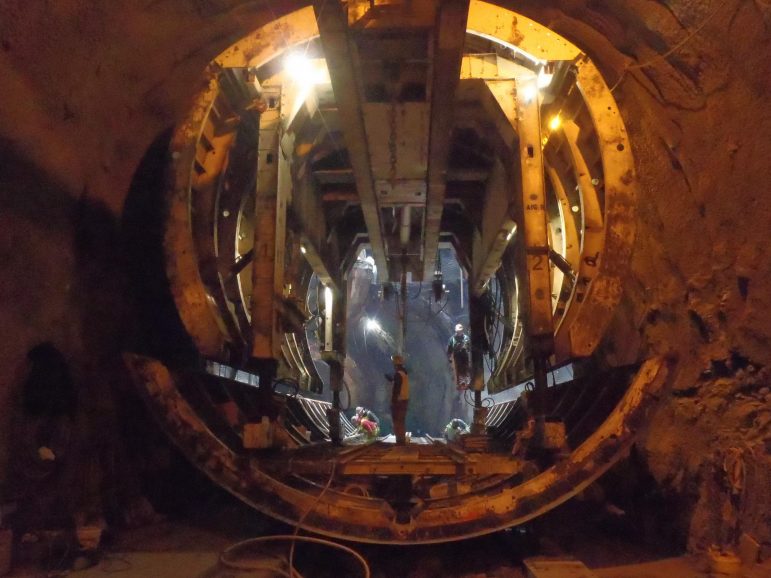 Imagine one of the Great Lakes on a sunny day — the water is clear and kids are playing in it.  But the day after a big storm, that same lake can reek of raw sewage.

It’s caused by a combined sewer overflow — a common problem in over 700 cities and towns nationwide. Some cities are finding a solution underground.

By 2035, Cleveland will be home to seven enormous tunnels sunk more than 200 feet below ground.  The Northeast Ohio Regional Sewer District is constructing tunnel number two on the city’s east side, just a couple of miles from Lake Erie.

The sewer district’s Jennifer Elting watches as a crane travels down a long, dark shaft.  “Right now the crews are lowering the individual segment pieces that will be used to create a ring that will line the tunnel once its completed,” she says.

The tunnel — 24 feet wide and three miles long — will serve as a storage basin during big storms, protecting Lake Erie from sewage overflows.

“Way back in the day, people dumped raw sewage in the streams,” she says.  “The streams got nasty, and so they covered the streams up.”

Jefferson says combined sewers were a more organized way to deal with sewage-filled streams. “So rather than dumping sewage into the streams, they would take the runoff heading toward a stream and the sewage and put it into a pipe.”

Overflows occur when waste water and storm water travel in one pipe to a treatment plant. Storms can overwhelm that system.

How do you fix such a big problem — a 4.5-billion-gallon problem in Cleveland?  There are several options.

“We could separate the pipes,” says Jefferson, who teaches hydrology courses and does research on stormwater management.

But the Northeast Ohio sewer district’s Doug Gabriel says that solution costs too much, takes too long, and disrupts the community.

“You’re dealing with an urbanized area that under the road — there’s already, water, sewer, storm, electric telephone, fiber optic, gas,” he says. “Curb to curb its full — the solution is you have to go deeper and deeper.”

Some cities use green infrastructure to address the overflow problem — slowing stormwater with rain barrels or green roofs that collect runoff.  Philadelphia is taking this approach with a 25-year, $2.4 billion initiative .

“We have 4.5 billion gallons — and green infrastructure is not the solution to a volume problem,” says Dreyfuss-Wells.

The Cleveland project aims to satisfy a federal consent decree with the EPA and the Department of Justice.  The Sewer District has to cut its combined sewer overflow to 500 million gallons annually. The price tag? $3 billion.

Cleveland is one of several cities under consent decree to reduce sewer overflows.

“When the volume of combined sewage gets to be too big, we can divert the stormwater runoff and sewage into these big storage tunnels underneath the ground until our system has the capacity to treat it at the wastewater treatment plants,” says Jefferson.

Other Great Lakes cities, including Milwaukee and Chicago, are also building tunnels.

Still, these tunnels aren’t a perfect solution.  There will still be substantial overflows, and potentially even more with heavier rains and a changing climate.

There’s also the financial cost of these projects — Northeast Ohio sewer district customers have been facing rate increases for years.

Alliance for the Great Lakes CEO Joel Brammeier says smaller cities have a bigger challenge when it comes to footing the bills for these kinds of projects.

“Every community has people that are going to have a challenging time paying for these activities,” he says. “But I think some small communities with lower wealth especially and smaller tax bases are challenged to pay for some of these projects.”

Brammeier says it’s important that the EPA act as a resource for these smaller communities — to work as a partner.  But that level of partnership is at risk: President Trump wants big cuts at the agency.

For the sewer district’s Dreyfuss-Wells, that means there might not be enough staff to help with design and engineering.

“We’re hoping that new administration is more open to innovative ideas we have,” she says. “Our only concern is that if EPA is so significantly understaffed or underfunded, we won’t have anyone to talk to.”

Congress will revise Trump’s budget proposal — including cuts to the EPA — over the next few months.  Tunnel number two should be ready in 2019.

This story was made possible in part by a fellowship with the Institute for Journalism & Natural Resources.