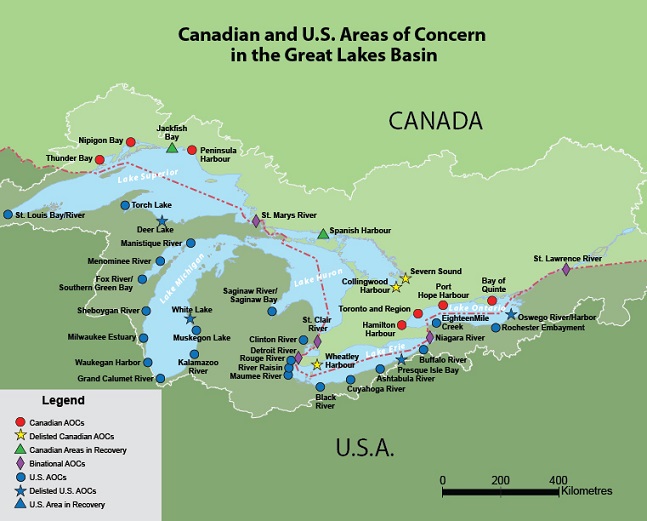 Map of U.S. and Canadian Areas of Concern in the Great Lakes. Image: Environment and Climate Change Canada.

While Congress recently restored funding in a budget proposal for a popular Great Lakes restoration program, critics fear that President Trump will continue to try to defund it as he reorders the nation’s spending priorities.

That could reduce 40 years of progress, according to those critics.

Congressional leaders last week agreed to continue funding the Great Lakes Restoration Initiative for at least one more year after Trump zeroed it out of his budget proposal.

Congress must still vote on the budget.

The consequences of Trump trying to cut the Great Lakes Restoration Initiative are a lot heavier than simply removing a 7-year-old program. When the initiative was started in 2010, it incorporated the $60 million that the Great Lakes already received in federal support, said Rick Hobrla, the acting deputy director of Michigan’s Office of the Great Lakes.

“I think there’s a common misconception that since the GLRI started in 2010 that eliminating that program will just take us back to the year 2009,” Hobrla said. “If the proposal goes into place, it takes us back to a time way before Great Lakes programs existed 40 years ago, so it would take us back to the time of President Jimmy Carter in terms of having funding available to the Great Lakes.

“So it would be a pretty drastic cut.”

This is a problem for numerous reasons, but in particular because the bulk of the initiative’s accomplishments addressed the Great Lakes Areas of Concern.

The Great Lakes Water Quality Agreement between the U.S. and Canada in 1978 identified 43 Areas of Concern with serious water quality problems throughout the Great Lakes. Of those, 26 are solely in the U.S. and 5 are shared. Michigan has the most areas at 14.

Some of them are on the lakes’ connecting channels, including the Detroit River, Menominee River, Niagara River and St. Clair River.

“There have been no new AOCs put on the list for decades,” said Cameron Davis, the senior adviser to the EPA Administrator during the Obama administration. “Because of GLRI funding, we’re only now able to make progress cleaning up the ones we’ve already had on the list.”

So far there have been four areas in the U.S. delisted–Deer Lake and White Lake in Michigan, Oswego River in New York and Presque Isle Bay in Pennsylvania. The three Canadian areas that have been delisted are Wheatley Harbour, Collingwood Harbour and Severn Sound in Ontario.

“For 20 years it was all studies and no action,” Davis said. “Since the Great Lakes Restoration Initiative, it’s been almost all action. The difference is plain and simple: money.”

Even now, Michigan has some areas that only need a year or two of monitoring before they can be delisted, but there are still areas that are a solid decade away from any talk about delisting, said Hobrla. The Michigan areas close to being delisted are the Lower Menominee River, the River Raisin, the U.S side of the St. Mary’s River and the U.S. side of the St. Clair River. With the Great Lakes Restoration Initiative potentially getting cut, those areas could remain Areas of Concern indefinitely.

“I don’t know if people understand the cost of restoring an area from decades of pollution. It’s not cheap. It’s not easy,” said Tanya Cabala, who helped start the White Lake Public Advisory Council in 1992. White Lake is one of the delisted Areas of Concern.

“We used the Great Lakes Restoration Initiative to help us. It was actually the last big project we needed to get us delisted. Without that funding it would not have happened. Two million dollars. This money is crucial to cleaning up the Great Lakes Areas of Concern.”

Funding would still come through private donations from citizens and environmental groups, but it would not be close to the money needed to clean up the remaining areas, Hobrla said.

“The potential biggest danger is a big chunk of the GLRI has been used basically in the fight to prevent invasive Asian carp from reaching the Great Lakes and that work would have to be reduced,” Hobrla said. “That could lead to Asian carp invading the Great Lakes, which would be a disaster for commercial fisheries. There’s a debate on whether that would happen, but it could.”

None of the consequences of a cut would be immediately obvious, said Hobrla. But they would lead to significant cuts in monitoring critical areas, not understanding what is happening to the lakes because research has been stalled and widespread contamination that might go undiscovered for a long time. Clean up would either be stopped or ramped down. Starting new work would not be in the cards. 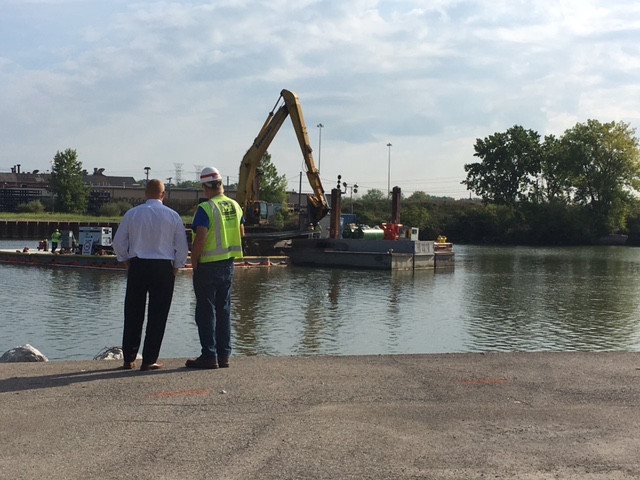 “The Detroit River is one of our AOCs, and there’s a lot of contaminated sediments on the shores, and we’ve spent years studying what contamination there is, the aerial spread, who might be responsible,” Hobrla said. “We’ve been doing that in the hopes that we could have a major sediment remediation operation and clean that up, but if funding gets cut that will remain there.”

The consequences go beyond the environment. Communities are also impacted by the Great Lakes Restoration Initiative, in their economy and their attitude, said Davis.

“The change I’ve seen is from people feeling like ‘This cleanup is never going to happen.’ or ‘It won’t happen in my lifetime.’ to ‘I might actually get to take my grandkids to fish and paddle in the river like I did when I was their age,’” Davis said.

The Great Lakes Restoration Initiative also supports other work in the Great Lakes area. For example, part of the initiative’s funding goes to programs run by the National Oceanic and Atmospheric Administration. That has led to grants that have supported nearly 60 habitat restoration projects, said John Ewald, the acting director of public affairs for NOAA Fisheries.

“First off, the great thing about it is it’s got bipartisan support,” Cabala said. “The people in Congress who represent us care about the Great Lakes and understand their significance and value, so that’s excellent, and I don’t see that changing.”

The vote on the budget will happen later this week.

“It is up to Congress to make the decision,” Hobrla said. “I would advise citizens to let their representatives and senators know how they feel on the issue about the proposed cuts.”