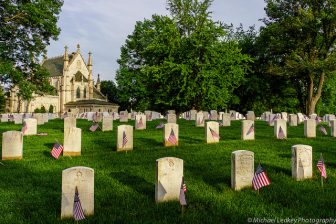 The Crown Hill National Cemetery with a gothic chapel in the background.  Image: Michael Leakey

A legal battle over expansion of a veterans’ cemetery in Indianapolis ended when the Indiana Forest Alliance and its allies dropped their challenge to the project, enabling work to continue.

The controversy began in 2013 when the National Cemetery Administration, which the U.S. Department of Veterans Affairs (VA) oversees, sought to purchase 14.75 acres to expand the Crown Hill National Cemetery, which includes one of the only old growth forests still within Indianapolis.

Some of the trees are hundreds of years old, and the association, responsible for interring deceased service members and veterans, intended to construct a columbaria on the land, a building designed to house cremated ashes.

After the VA purchased the property in September 2015, the Indiana Forest Alliance sued in December to block the project. The alliance is a nonprofit group that promotes protection of Indiana’s native forests.

Its case rested on the allegedly flawed process the VA took in preparing its environmental assessment under the National Environmental Policy Act.

For a federal agency to produce a complete environmental assessment under the law’s guidelines, it is required to “involve environmental agencies, applicants and the public, to the extent practicable.”

In the land acquisition process, the cemetery association and VA solicited comments from 11 federal and state agencies as part of an “early coordination packet” which included an environmental review process. The information described the area in question as “heavily wooded with numerous shagbark hickory, oak and cottonwood trees (among others) comprising the overstory.”

The Indiana Department of Environmental Management and the U.S. Fish and Wildlife Service responded by highlighting the proximity of the project to the roosting spot of two endangered bat species, as well as three small wetland areas under an acre. Other agencies expressed concern that removing trees might interfere with migratory and stop-over patterns of some birds and suggested how to avoid drastically disturbing the environment.

The cemetery association and VA also hired an environmental consulting firm whose report concluded that the project didn’t require an environmental assessment  to continue. Regardless, the VA wanted an assessment because “public involvement is an important aspect of this project and should be considered,” according to court documents.

But how exactly the public was involved is exactly what W. Russell Snipes, the attorney who represents the Forest Alliance, took issue with.

Snipes argued that a public meeting should have been held to discuss the environmental assessment before the draft was published. Instead, the VA placed drafts in local libraries and advertised its availability in a local newspaper.

No public comments were submitted.

Agencies have great leeway in how they choose to involve the public, according to prior case law involving the National Environmental Policy Act. Recognizing this, Snipes still found the limited public engagement to be a byproduct of the VA botching the environmental assessment process, and inadequate for the public to fully weigh in on the proposed deal.

The VA needed to purchase the property before Sept. 30, 2015, or else it would have needed to go back to Congress for another appropriation, which would delay the project further. Realizing it had failed to alert the public until late June, it opted for the public notice and draft postings to complete the assessment in time.

“We think that was an egregious violation of the whole policy behind the National Environmental Policy Act, which is full public involvement in the process so that agencies can make a fully informed decision, and so then the courts have a fully developed record if that system is challenged,” Snipes said.

The Forest Alliance also argued that the VA failed to properly consider other alternatives to the project, or that it should have produced an environmental impact statement, which would carry with it stricter regulations.

U.S. District Chief Judge Jane Magnus-Stinson found that the Forest Alliance failed to prove the VA or National Cemetery Association acted “arbitrarily or capriciously” in complying with the law.

The U.S. 7th Circuit Court of Appeals also refused to block the project.

Before dropping the case, Snipes and the Forest Alliance hoped to convince the National Cemetery Association to accept an offer by the Dr. Laura Hale Charitable Trust to purchase the land from the VA. They also suggested a potential land swap organized through the trust.

The Department of Veterans Affairs rejected this deal. When approached for comment, the National Cemetery Association’s attorney, Shelese Woods, declined to answer specific questions, including why the deal was rejected.

Tim Horty, the public affairs officer for the U.S. Attorney’s Office for the Southern District of Indiana, speaking on behalf of the VA, issued a statement that read, “The U.S. Attorney’s Office thought the current location best met the needs of the VA. We look forward to helping the families of our veterans establish a fitting place to honor their loved ones in Indianapolis.”

Despite the Forest Alliance’s failed court challenge, the VA acknowledged in a statement that it had taken public concerns into consideration regarding the preservation of old growth trees near the project.

Jessica Schiefer, a VA communications and outreach officer who wrote the statement, said that the cemetery association instructed the Army Corps of Engineers “to revise the site plan to preserve as many mature trees as possible.”

The plan will retain and incorporate all trees measuring 40 inches in diameter or greater. The revised plan also retains 73 percent of all trees between 30 and 39 inches in diameter. Schiefer said that tree felling has already begun to complete removal by the beginning of April, when the endangered bat species begins to roost. Construction is then expected to resume at the end of this summer.