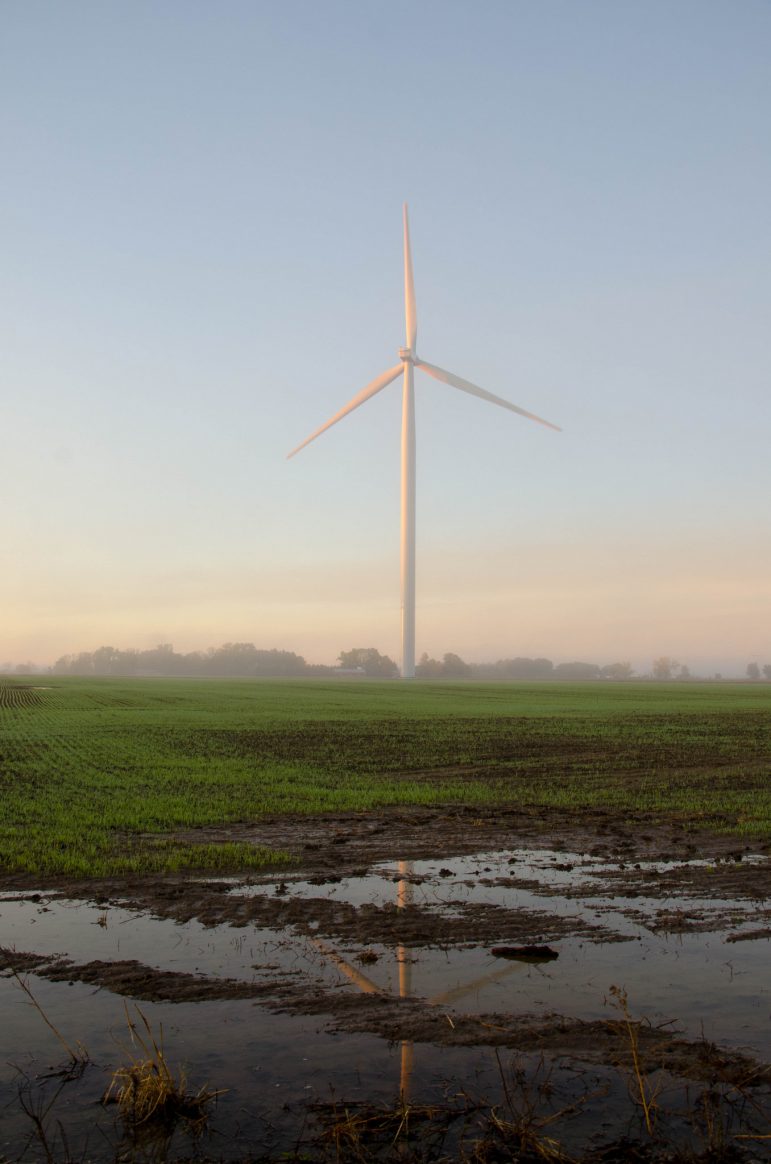 Northport, a village in Leelanau County, gets half the energy for its wastewater treatment plant from a community-owned wind turbine.

The village also claims the only 100 percent solar-powered golf course in the United States, according to Stanley “Skip” Pruss, former director of the Department of Energy, Labor and Economic Growth, who moved to Leelanau Township in 2008.

Solar energy is used to power the clubhouse and other operations.

“Our community members are feeling passionately that we are accelerating the transition to clean energy,” Pruss said. “Northport can be an example to other local communities in how to go about doing that. It’s a good way to go.”

Northport has been committed to a 100 percent Clean Energy plan since 2010, joining cities such as Grand Rapids and Traverse City as pioneers in Michigan’s transition from fossil fuels.

Michigan has eight communities with other climate action plans in place, supported by the Michigan Climate Action Network. The network developed a tool kit – including a development model, resolutions and success plans – for communities all over the state.

“This trend is catching on,” Pruss said. “I expect the number of communities in the group network to grow exponentially.”

Local leaders around the state are looking to early adopters to help get them started. Sarah Mullkoff, energy program director for the Michigan Environmental Council, said Traverse City has used Grand Rapids as an example in launching its renewable energy plans. Grand Rapids expects to get 100 percent of city operation power from renewables by 2025.

“The city leadership and the county leaders – they understand the transition to renewable energy has become mainstream,” Mullkoff said.

In December, Traverse City set a goal to meet all electricity needs for city operations – accounting for 3 to 4 percent of total city electricity use – with renewable sources by 2020.

“Right now we are going to look at our capital improvement plan to see how we can green up any of our future infrastructure projects, as well as looking at our facilities, buildings and the vehicles,”  Mayor Jim Carruthers said. “Anything we do in the future we are going to evaluate with our newly formed green team – including city staff, myself and environmental groups – to review every project we have to meet these goals.”

Each locality is pursuing a different path toward renewable energy. Northport worked with the University of Michigan School of Natural Resources and Environment graduate program, teaming up with six students who surveyed residents and researched energy efficiency and financial models for the village.

In 2017, the school plans to implement the Property Assessed Clean Energy program in Northport. The program, which Leelanau County adopted in November, facilitates commercial property owners’ application of energy efficiency, water efficiency and renewable energy production to lower energy costs, according to the project description.

The movement in local communities beyond fossil fuels has gained applause from environmental organizations. Carruthers said the plan “currently relies heavily on our non-profit volunteers and the partners in environmental groups.”

The Sierra Club, an environmental advocacy organization, is encouraging local efforts through a “Ready for 100” campaign that aims to motivate leaders to shoot for communities powered by 100 percent clean energy by 2050. Regina Strong, director of the campaign in Michigan, said the group is educating people about clean energy and engaging citizens to join the program.

“The goal is to say, ‘Our community only wants to buy clean energy,’” said Anne Woiwode, the Sierra Club’s Michigan conservation chair.

Woiwode said attention to local government action to reduce fossil-based energy use has increased due to a lack of leadership from state and federal governments.

“There is a sense that we need to have very strong environmental laws and clean energy,” Woiwode said. “But the tools are the best right now at the local level.”