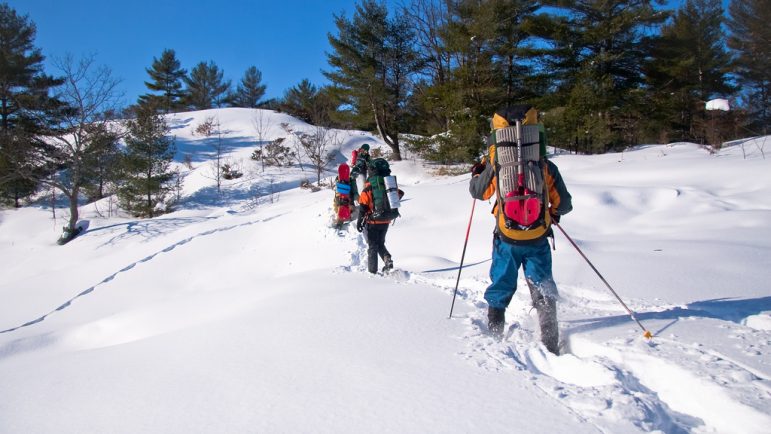 LANSING — On any given weekend this winter, a half dozen or so hearty souls will venture into the backcountry of the Pictured Rocks National Lakeshore near Munising, pitch a tent and go camping.

They are joining an increasing number of winter campers at state, national and private campgrounds around Michigan. Some are going off the grid in small backpacking tents while others are braving the elements in full-equipped RVs plugged into the internet and cable TV.

Winter camping has “taken a while to gain some traction,” said Jason Fleming, chief of resource protection and promotion for the Michigan Department of Natural Resources’ Parks and Recreation Division.

“Overall, I’d say it’s something that is slowly expanding.”

More than a dozen state parks offer some type of winter camping, according to the DNR.

Two national parks in Michigan are open during the winter months.

Also open all year are at least 15 of the nearly 90 private campgrounds that belong to the Michigan Association of Recreation Vehicles and Campgrounds.

Sheffer said there are private campgrounds around the state that offer year-round accommodations and they are reporting an increase in “winter recreation enthusiasts.”

At state campgrounds, winter camping has always been popular for people who use cabins in the parks, Fleming said.

The state has added yurts and lodges for people who “may not have suitable camping gear for the cold winter,” he said.

Last January and February, campers booked 2,502 nights at state campgrounds, according to the DNR. That was up from 1,962 nights in the first two months of the previous year. In the same two months of 2014, bookings totaled 1,682.

“So there is a growing interest in this time of the year, (but) small compared to peak times,” Fleming said.

Ten years ago, Muskegon State Park wasn’t even open in the winter, he said. Now, one of the loops at the park is plowed for campers who come for cross country skiing, snowshoeing, ice fishing, snowmobiling and the park’s luge track.

The luge run is 850 feet long and riders can reach speeds of up to 30 miles an hour.

Fleming said he plans to take his own sons to stay in the park’s canvas-sided yurt.

The yurt is 20 feet in diameter and heated by a wood stove. It has no electricity or running water. “However, an outhouse is located nearby,” according to the DNR’s website.

Electricity generally is available at the state parks but usually not water, he said. However, there are exceptions.

At Mitchell State Park in Cadillac, restrooms are open all year, Fleming said.

At the Porcupine Mountains Wilderness State Park in Ontonagon, visitors can stay in a 12-person lodge or head off to camp in the back country and snowshoe or ski on the park’s groomed trails, said Jimmy Newkirk, a ranger at the park.

“Every year, our attendance has seen an uptick,” he said.

Farther east, at the Pictured Rocks National Lakeshore, only backcountry camping is available in the winter. Ranger Scott Perry said the park hosts an average of six campers at any given time. All are in tents and usually venturing out on snowshoes or skis. The park is especially popular with college students and ice climbers, he said.

During the winter, the privately owned Timber Ridge RV & Recreation Resort in Traverse City keeps open 20 of its 300 campsites for folks staying in motorhomes and travel trailers.

“We have seen an increase of maybe 50 percent (in winter camping) over the last two years,” said Ella Baggs, park manager. “People are staying more in their campers rather than motels.”

But they aren’t necessarily roughing it.

Tahquamenon Falls State Park in Paradise has an eight-person lodge that’s open in the winter. The park also plows out two loops in its campground to open up 20 to 30 sites, said Theresa Neal, the park’s naturalist.

On a typical winter weekend, Neal said, six to 10 of the campsites might be filled. All sites offer electrical hookups and fire pits. Water is available at a single, heated spigot.

Some visitors come to the park to see the waterfalls, which are especially awe-inspiring in the winter.

The other plus? “No mosquitoes!”

The growing use of the park in the winter is a boon for business owners in nearby Paradise.

Shirley Clark, owner of the Berry Patch Gifts, Bakery & Restaurant on M-123, said she is seeing an increase in visitors to the park in the winter.

“We have a couple that comes from Florida every year,” she said. They stay in an RV they had specially made in Canada to withstand Michigan’s harsh winters.

“We also have a man who comes up every year. He sleeps outdoors in a sleeping bag,” Clark said.

Most winter visitors come to Paradise to ski, snowshoe, snowmobile or simply walk the trails and check out the roaring, icy waterfalls, she said.

Of course, camping in Paradise’s winter wonderland can be challenging.

By early January, the area already had received about 80 inches of snow for the season and temperatures around zero are not uncommon, Clark said.

“It’s just awesome,” she said, “if you’re into that kind of thing.”