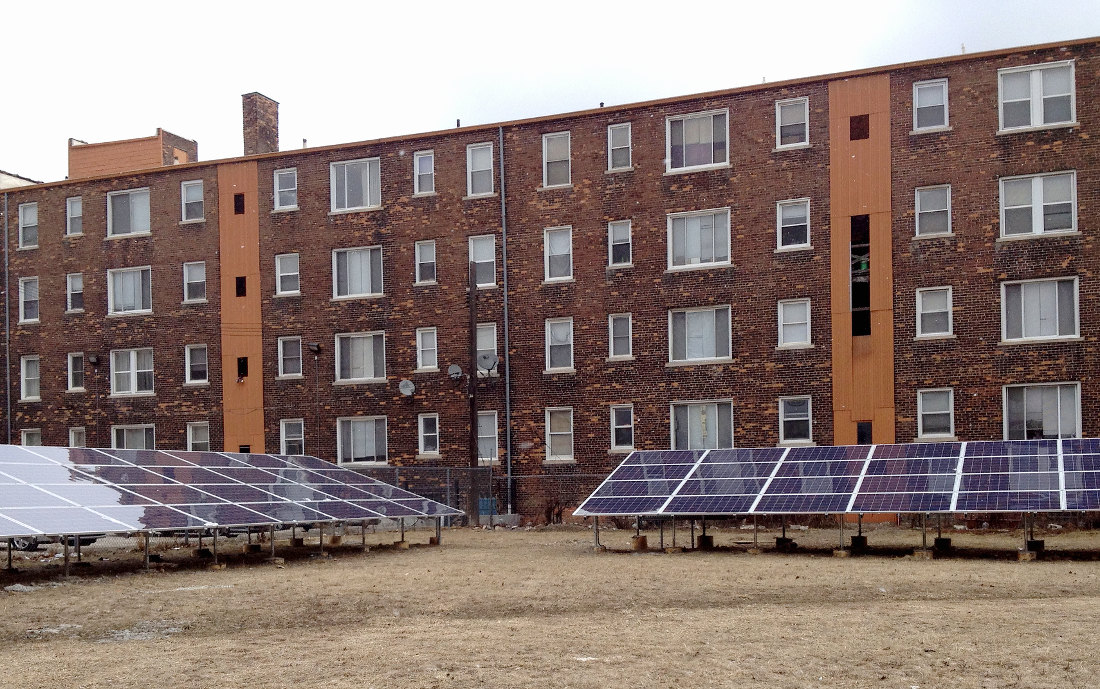 Advocates pushing for cooperatively owned renewable energy projects in Detroit are facing difficulty, which they blame largely on regulatory hurdles and resistance by a major utility.

As groups seek better clean energy access in the city that’s still grappling with large-scale industrial pollution, community solar often surfaces as a way to provide relatively low-cost buy-in for residents compared to installing their own panels, and also turn brownfield sites into “brightfields” – both of which suit Detroit.

But developing community solar in Detroit, as is the case across Michigan, largely comes down to whether the local utility is willing to participate. It’s part of a broader challenge in Michigan that favors investor-owned utilities when it comes to solar development, especially as state lawmakers consider policy changes that advocates say would only further benefit utilities.

“(Rooftop solar) totally eliminates a large share of the population that has to pay a higher percentage of income on utilities. If there is a system where they buy directly in part of community solar, there is a very large untapped market here that could benefit, where people could be shareholders and we could reduce the amount of fossil fuels burned at coal plants in the Detroit area,” said Diane Van Buren, president of Detroit-based Zachary and Associates. Van Buren’s firm rehabilitates properties and installs solar and geothermal systems on them.

Van Buren and others are working on setting up a community solar project within the city. While she declined to give many details about the plan, she said the main challenge has been working around the state’s policy on community solar.

“We just have to get through the policy piece,” she said.

Until now, there hasn’t been a uniform state policy allowing for community solar for regulated utilities, though lawmakers have introduced legislation to do so. It has been more common among municipally owned utilities and cooperatives elsewhere in the state. Any sort of third-party ownership model would basically end up being a major net metering project behind-the-meter.

Instead, major utilities DTE and Consumers Energy have pursued projects they own, the number of which has continued to grow.

“There’s a growing trend toward figuring out how community-interest developments can proceed,” Redfield said. “The reality is: Current franchise arrangements and requirements of utilities limit the ability of third-party development.”

Additional challenges for small-scale renewable development compared to large scale also include cost, interconnecting to the grid and maintaining reliability.

“And that’s what we’ve got: A pretty low-risk approach by basically having utilities being the procurer and constructor of large-scale renewables,” Redfield said. “It doesn’t mean it can’t change or won’t change.”

In September, DTE Energy joined with Detroit and U.S. Department of Energy officials in unveiling plans for a 2 megawatt, utility-owned solar project on a vacant 10 acres of city-owned land, the site of a park that was decommissioned in 2011. DTE is also developing a 48 megawatt solar project in Lapeer, which is near Flint.

Over the past two years, advocates have seen steady progress in the growth of community solar across the U.S. and in Michigan, though it has taken place outside of Detroit.

But DTE officials say they are responding to customer demand. Next month, the utility plans to unveil its MI Green Power initiative, which will allow community buy-in for renewable energy projects, said Dave Harwood, DTE’s director of renewable energy.

The pay-as-you-go pilot program will allow customers to subscribe to shares in DTE’s Detroit and Lapeer solar projects, as well as a new wind project coming online in the Thumb region, Harwood said.

“Customers who subscribe to it may cause us to build more,” he said.

Still, that model doesn’t appear to be what advocates in Detroit have in mind. Harwood called third-party ownership models a “complicated topic” that could subject developers to state and federal regulations as wholesale power generators.

“A number of regulations come into play,” Harwood said. “Our concern is that we set up our rates that are fair, cost-based and people on that rate are paying for the services they get.”

Van Buren said while DTE was reluctant to embrace solar as recently as two years ago, she’s starting to see a “crack in the veneer” in which the company is “starting to at least accept doing solar.”

“But I don’t think their business model allows them to look at anything else than if they own it,” Van Buren said. “We need to challenge that. We’re going through a shift now and the sun shines on everyone, not just utility companies.”

While pending legislation in Lansing has focused on state standards for renewables and energy efficiency, Detroit-based groups have taken a particular interest in the bills as a remedy for ongoing air pollution there and also for economic development.

“For us, this is our first time to really roll up our sleeves and get in the fray in Lansing on the legislative side and it’s because this energy bill has so much at stake for Detroiters, particularly for health impacts in our part of the state from air quality issues,” said Guy Williams, president and CEO of Detroiters Working for Environmental Justice.

“There’s also an opportunity within the energy bills for provisions that can benefit our local economy. For example, maintaining or increasing energy efficiency elements. That’s the kind of thing that supports weatherization investments, supports the construction industry and helps lower utility bills for people.”

Additionally, protecting net metering provisions is a “way for people to truly have an easier pathway to energy independence. That’s going to give our whole city more resilience,” Williams added.

“We are a long way from where we want to be in the environmental community on these options,” he said.

Walker Miller – along with Redfield and Williams – took part in a discussion last month with U.S. Energy Secretary Ernest Moniz while he was in Detroit. In addition to the upfront cost of installing rooftop solar, another challenge is the “lack of flexibility and innovation when you talk about solar. There’s no real option in the discussion and when you need utilities, you default to the utility company. For the past 100 years we have not said, ‘Here are some other options.’ Education is a large barrier,” Walker Miller said.

As for state legislation, she appreciates at least a discussion about what the grid of the future will look like.

“The best thing we could do right now is pay attention to energy efficiency and renewable energy opportunities as we’re revitalizing the city of Detroit,” she said. “Using renewable energy as a catalyst to bring in people who are normally left out of the energy discussion is a wonderful opportunity I hope will be replicated.”