Sometimes it takes a road trip to generate fresh thinking; to look at old issues from a new perspective.

Here’s what I mean.

I had watched hours of traditional Great Lakes conferences that took place in Toronto and Sandusky, Ohio a few weeks ago. They were the regular gatherings of the Great Lakes establishment and it felt like I’d been condemned to watching old reruns of a mediocre television program.

You know the plot and it doesn’t change. The characters mouth the same lines and the result is the same. OK, I exaggerate to make a point but you get it.

In 2011 at a Great Lakes conference Lisa Jackson stated that the pesky algae fueled by farm pollution would be a priority of the U.S. Environmental Protection Agency. Jackson was President Barack Obama’s EPA administrator.

Since, there was the Toledo water crisis in 2014 followed by a record algae bloom in Lake Erie in 2015. At the Toronto conference the talk was of a plan to be finalized in 2017 and implemented in 2018. That’s six years after Jackson had made algae a priority. Kids born in 2011 will be entering second grade in the time it will take to launch a plan.

You get the picture; the song remains the same.

That’s why it was so refreshing last week to travel to Mount Pleasant, Michigan, where I participated in Central Michigan University’s annual Great Lakes Symposium.

There were fresh faces present and smart thinking in the air in the school’s brand spanking new science center. The atmosphere felt more of the present and future than the past.

My small part in the day-long event was easy; talk for ten minutes about Great Lakes issues then answer questions from the attendees and CMU’s science faculty.

It was the questions that got my attention.

What’s the biggest problem facing the Great Lakes? That was an easy one; drinking water quality. Think Toledo crisis and Flint.

This water-wealthy region has had two drinking water quality failures in two years. It doesn’t get more basic than that. And they both happened under the oversight of the U.S. EPA. The same EPA that’s working on that plan for Lake Erie for 2018.

You don’t hear much about Flint at Great Lakes conferences which is curious. I mean it’s only the biggest drinking water water quality issue in the nation.

How are we doing in the push-pull between a sound economy and environmental sustainability?

Hmmm, that required some thought and I was thankful to not be the first panelist to answer.

But with a few minutes to reflect my response became clear. 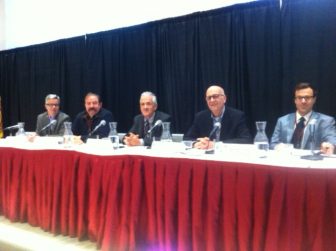 Listen to any business news program — NPR’s Market Place is my favorite — and the economy is measured primarily by one word, growth. No growth is bad. Slow growth is bad too, just a little less so. Sustainability and growth are rarely mentioned in the same sentence.

Business is ascendant in our society, I said. Heck, the Supreme Court verified that in its Citizens United decision that affords deep-pocketed corporations the same rights to make donations to political campaigns as not-so-deep-pocketed citizens.

Bring business ascendancy down to a Great Lakes environmental level and it takes us back to Lake Erie. No federal or state agency or politician has the political will to challenge big ag or small farmers — both are businesses – on their pollution to Lake Erie and other watersheds.

Instead they coddle them by encouraging the use of best management practices and toss around overused phrases like the hyper-use of collaboration and partnering as if they are results.

They’re process words that haven’t led to results for a battered Lake Erie, the only Great Lake whose water quality is listed poor and deteriorating.

If you could do one thing to improve the Great Lakes what would it be?

Again, I wasn’t first to answer but I wish I could have been. It’s an easy one.

Update the Clean Water Act so it includes agricultural runoff as point source pollution like it does for any other industry. Currently if BP’s Whiting, Indiana refinery releases a few extra gallons of pollution to Lake Michigan all hell breaks loose. But the Clean Water Act doesn’t regulate farmers, they’re exempt. In fact, we pay farmers to not pollute. Talk about a perverse incentive.

My thoughts at the symposium were not revelatory or profound. They were simple and common sense. But these days the basics seem to be drowned out by the need to make the simple complex.

My Great Lakes thinking was stuck in neutral until that road trip to Mount Pleasant. It forced me to get out of my repetitive thinking comfort zone.

It revealed that better results for the Great Lakes may be there for the taking if you hit the road to look for them.