Trucks carrying some 40,000 tons of cherries will drop them off this month in Cadillac to fill food bank shelves in West Michigan and the Upper Peninsula. 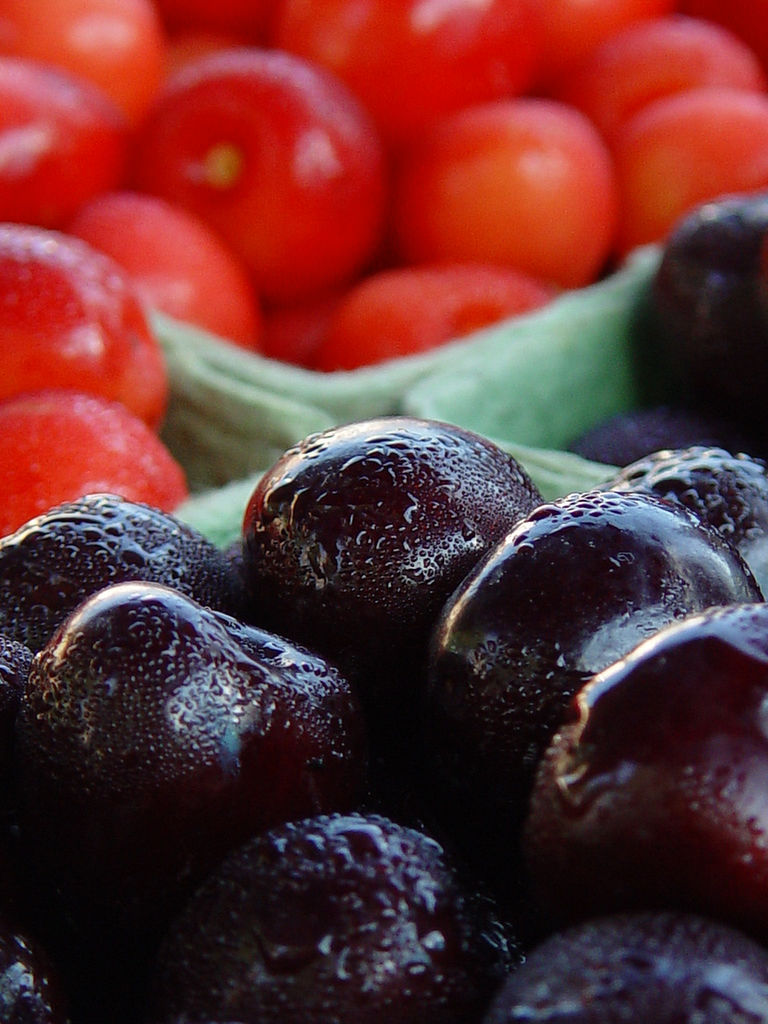 Traverse City cherries will soon be on the shelves of food banks throughout the state. Image: David Jakes

It’s part of a statewide effort to reduce food waste and put it to use feeding poor people.

“The state is one of the winners when hunger comes off the table,” said Phil Knight, executive director of the Food Bank Council of Michigan.

Flawed and ideal vegetables are held back from the grocer’s shelves and your dinner plate. Industry marketing agreements among growers mean some ideal or “type one” fruits and vegetables are not sold during years where the harvest is strong. Doing so, growers say, stabilizes the price of the crop and makes it easier to survive the lean years when the harvest isn’t as bountiful.

Other so-called “wonky vegetables” go unsold because of cosmetic flaws such as being misshapen or the wrong color. These vegetables are safe to eat.

More of both types of produce can feed hungry people, say officials at Feeding America West Michigan, the Comstock Park-based food bank that’s distributing the cherries and that serves 40 counties in the Upper Peninsula and West Michigan.

Some evidence indicates that donations are up, and so are programs that distribute them. The Greater Lansing Food Bank says its produce donations nearly doubled between 2014 and 2015, and much of it came from wonky vegetables. In 2014 the food bank received 1.3 million pounds of produce. By 2015, the donations climbed to 2.2 million pounds.

The Food Bank Council of Michigan typically gets $1.78 million from the Michigan Department of Health and Human Services for the Michigan Agricultural Surplus System, a partnership among that agency, growers and food banks. The grant increased 15 percent in 2016.

Knight attributes the increase to a growing understanding of the benefits of getting healthy food to people in need.

Food banking is only about 30 years old, he said. Innovative partnerships and programming are taking it to a new level.

In April, Feeding America West Michigan announced a partnership with Arbre Farms of Walkerville, backed by a grant from the  Department of Environmental Quality, to “rescue” produce that would otherwise be wasted. The food is flash-frozen and donated to food banks. That makes it safe for up to two years.

It will be distributed by Feeding America West Michigan and the Food Bank of Eastern Michigan.

Arbre Farms estimates that by year’s end, it will have donated between 600,000 to 1 million pounds of beans, carrots, peas and other type two vegetables.

Now Shoreline Fruit, a cooperative of cherry growers based in Traverse City, is shipping two truckloads of “type one” cherries to Feeding America West Michigan.

The 40,000 pounds that will be donated to Feeding America West Michigan, is just a fraction of the cherries held back under a cherry industry marketing agreement, said Don Gregory, co-owner of Cherry Bay Orchards and chairman of the board at Shoreline Fruit cooperative in Traverse City. The cherry industry agreement that Shoreline Fruit follows means that to stabilize prices, Twenty-nine percent of this year’s crop isn’t going to customers this year. But it does allow for donations to charities.

Millions of pounds of cherries will sit in storage. But Gregory said he hopes this month’s truckloads of donated cherries are just the beginning.

“We’re looking for more opportunities to donate,” he said.

Not all of Michigan’s crops are suitable for food rescue. Waste is not a big problem for sugar beets, said Ray Van Driessche, director of Community and Government Relations for Michigan Sugar Co.

Still, the nonprofit Natural Resources Defense Council in New York City estimates that up to 40 percent of the nation’s food goes to waste.

Better funding and education could bring more growers, processors, and retailers to the table, Steiner said. More food producers need to know they can donate excess food and that they have liability protection for those donations.

That is crucial protection for retailers, said Linda Gobler, president and chief executive officer of the Michigan Grocers Association.

Grocer donations to food banks have been happening for a long time, said Gobler, who serves on the Governor’s Recycling Council and is excited about the prospects for food diversion programs and keeping food out of landfills.