A water testing device makes its freshwater debut in Lake Erie Monday in a test that could lead to a network that warns of toxic algal blooms. 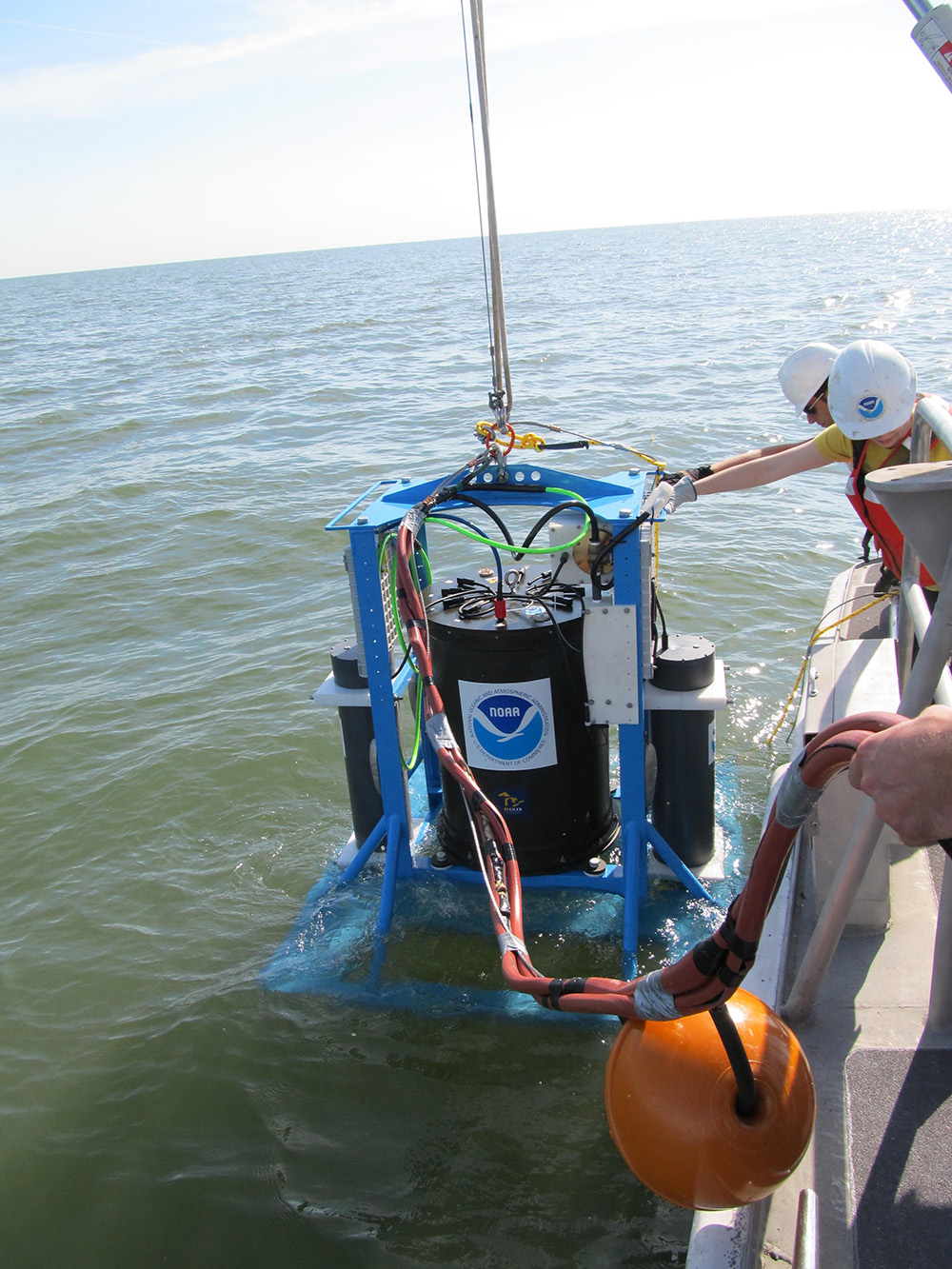 The sealed Environmental Sample Processor is lowered into a lake. Image: NOAA.

It’s called the Environmental Sample Processor (ESP), a 2.5-foot long cylinder nicknamed “lab-in-a-can.”  The instrument is anchored underwater where it samples water, concentrates algae and particulates onto a filter, analyzes them and sends the results electronically through a buoy that relays them to a lab.

In Lake Erie’s case, the device will search for bacteria and for potential toxins called microcystins that are produced by freshwater cyanobacteria.

Microcystin made headlines in 2014 for causing the shutdown of the Toledo water intake. About a half million people were without municipal water in their homes for more than 48 hours.

The device will significantly increase how much sampling gets done, said Tim Davis, a research scientist for the National Oceanic and Atmospheric Administration in Ann Arbor.

It’s not feasible under the traditional method to take the time needed to run out to the lake every day for a sample, Davis said.

The ESP will sample in the western basin of Lake Erie every other day and be deployed for about six weeks.

“Most likely this year it will stay at the rate we put it in at because we are doing a lot of learning and exploring with this instrument to see the most useful set of information we can get from it,” said Alicia Ritzenthaler, a researcher with the Cooperative Institute for Limnology and Ecosystem Research at the University of Michigan. “It is possible that we could go in and change that.” 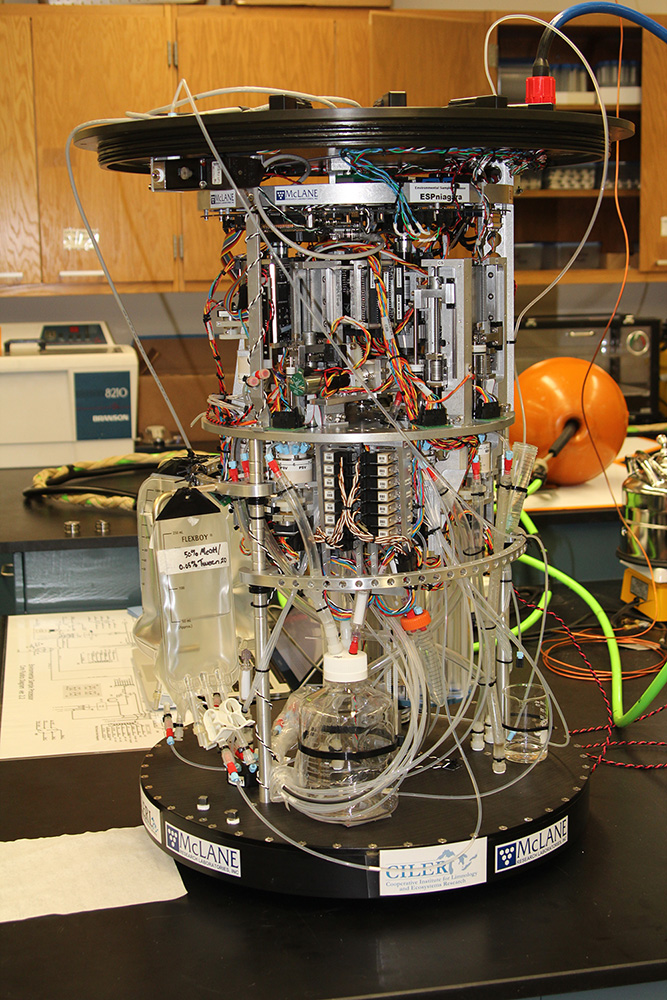 The Environmental Sample Processor out of its case and in the laboratory. Image: NOAA.

The ESP will sit on the bottom of the lake on a 5-foot by 5-foot platform specially developed because Lake Erie is significantly shallower than the ocean where it has been deployed before. The ESP team and research lab modelers chose where to place the device based on how blooms can move through the lake.

This one is placed to provide early warning of problems for the Toledo water intake.

Toledo has its own monitoring systems in place, including a few buoys.  You can even see what one of them sees. The city tests water with a network of monitoring buoys and with frequent water testing.

“The upfront cost is high, but when you look at the data that should be collected by this instrument and the ability to serve as an early warning network, the cost is not really all that crazy,” Davis said.

Placing this instrument into Lake Erie is the first step of what Davis and Ritzenthaler hope will become a network of the devices. Multiple ESPs have already been used in saltwater ecosystems, including those monitored by the Northwest Fisheries Science Center in Seattle and the Woods Hole Oceanographic Institution.

Ritzenthaler and Davis think adding more machines is financially possible. The tools to clean and maintain the instrument and other technical equipment could be used for more than one device.  Labor costs would remain the same.

“A second instrument wouldn’t necessarily double the cost because the internal infrastructure is already set up,” Ritzenthaler said. “Tim and I would still be able to manage two ESPs on our own.”

One potential outcome from using ESPs is a model that gives even better warnings when water intakes and other areas are threatened by toxic algae blooms.

“We just don’t have enough data,” Davis said. ”We know bloom toxicity can change rapidly day-to-day and what we are seeing on a weekly basis is not at this point good enough to develop a toxin prediction model.

“Having an instrument that is able to take a sample every other day, daily or more – depending on what we need – will help us understand the short term changes in toxicity.”

The ESP is deployed by the National Oceanic and Atmospheric Administration’s Great Lakes Environmental Research Laboratory, the agency’s Cooperative Institute for Limnology and Ecosystems Research at the University of Michigan and the Monterey Bay Aquarium Research Institute.