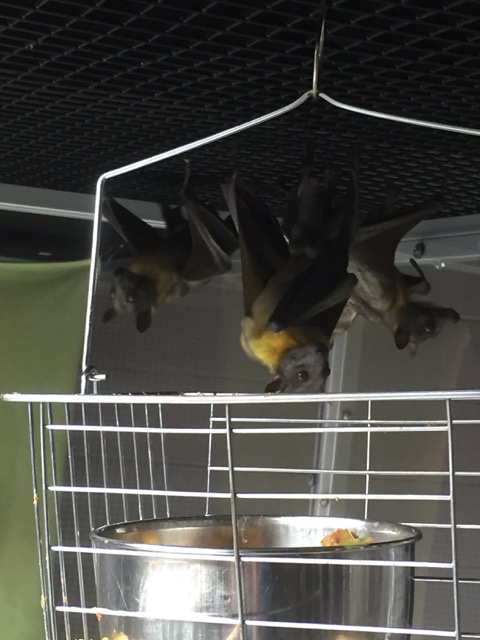 A group of straw-colored fruit bats hanging before a meal at the Bat Zone. Image: Eamon Devlin

You can step up to the plate at the newly renovated Bat Zone.

We’re not talking new batting cages at a fun park. This is North America’s only sanctuary and education center for bats and other nocturnal creatures.  It is run by the Organization for Bat Conservation at the Cranbrook Institute of Science

The building recently got a $35,000 facelift: new floors, heating and cooling systems and lighting thanks to about 300 small donations and the Organization for Bat Conservation’s board of directors, said Philip Garofalo, the communications manager for that group.

The Bat Zone teaches about 12,000 visitors per year about bats and other nocturnal critters. It has almost 200 night-loving animals and nearly 20 different nocturnal species. That includes a two-toed sloth, striped skunk, three species of owls and 12 species of bats, including the Malayan flying fox and straw-colored fruit bats.

All Bat Zone animals have been rescued from the wild, former owners or even zoos. For example, Kamilah, one of the Malayan flying foxes, was rescued from a zoo because of a wing injury and severe allergies. At the sanctuary she receives more attention: making sure she gets food and water, as well as Benadryl for her allergies, said Aja Marcato, the conservation programming director for the organization.

This type of individualized attention to the animal isn’t the only interaction between bat keeper and bat.

“Bats are very social and interact with staff constantly,” Marcato said. “They are curious and vocal whenever you enter their environments. 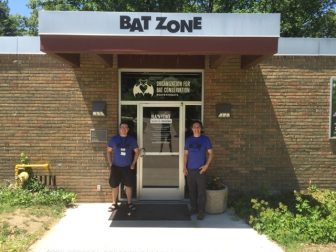 “Many of us have been working with bats for many years and the work never gets boring.”

It is this type of interaction and curiosity that is visible at the Bat Zone.  Every day guests can take a tour and learn about the animals. A guide will bring you eye-to-eye with numerous bats and if you’re lucky, they can also coax a bat or two to demonstrate echolocation, the mechanism they use to see in the dark.

On Friday evenings, visitors walk the grounds of Cranbrook, watching for wild bats that happen to be flying silently through the night as they eat mosquitoes and other insects.

To help spot them, guides are armed with iPads attached to an Echo Meter Touch, a device that detects, records and identifies the sound waves nearby bats emit to navigate. The Echo Meter Touch is available for anyone to purchase and then use at home with its companion app.

That’s not the only way Bat Zone uses technology. To kick off the opening of the new building, the Organization for Bat Conservation held its first Facebook Live event with the Discovery Channel. “We had about 60 people live commenting,” said Rob Mies, the executive director and founder of the group.  Mies is a strong bat advocate. He’s appeared on the Today show, Late Night with Conan O’Brien and Ellen.

The plan is to continue using the new live-streaming function monthly through Facebook.

Can’t make it to the Bat Zone?  Bat cams are available from the group’s website. You can watch bats 24/7 in their Bat Zone homes. 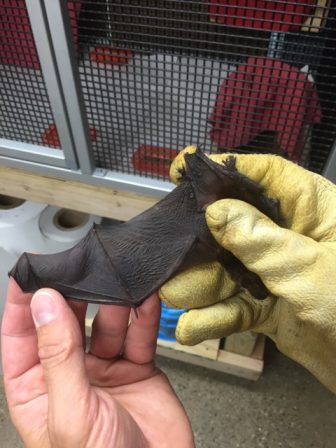 Other upgrades include replacing metal caging with glass, allowing people to get clearer views of the bats as they hang, fly, or interact with ladders, bridges, toys and other items that staff provides to keep their minds and bodies healthy, Mies said.

Guests can symbolically adopt the animals  right after seeing them. For a donation, you receive more information on the critter you choose to adopt.

The bats diets include fruits, insects and even cow’s blood, depending on the species. However local residents needn’t worry, bats in the Great Lakes region are strictly insectivores.

The bats are native to places all over the world but have been taken in by the sanctuary for a variety of reasons.

The organization is trying to teach as many people as possible about bats, their threats and how people can help them, Mies said.

Those threats include loss of habitat and pollution. But the largest concern is white nose syndrome, a fungus that wakes up hibernating bats and causes them to die of starvation or dehydration, he said. 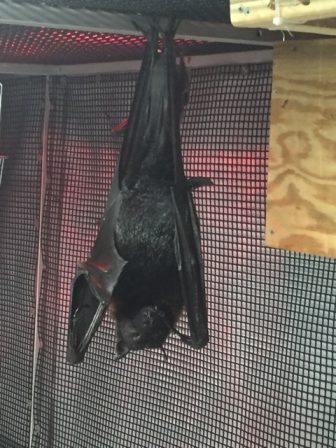 The wingspan of this Malayan flying fox is almost 5 feet. Image: Eamon Devlin

“Within another 10 years or so, it is going to wipe out the majority of bat populations or at least individuals across North America,” Mies said. Populations within the Great Lakes region have already drastically decreased.”

The organization’s Save the Bats Campaign has identified four ways people can help.

The Bat Zone is particularly helpful with the education part of the strategy, he said. “Most people don’t know how economically and ecologically important bats are.”

Another way to help is by setting up bat houses. These provide bats safe places to raise their young, and gives them an alternative to your attic, said Mies.

People can also garden for bats by planting certain flowers and plants like sky blue asters and choke cherry, or providing water through things like a bird bath.

And you can help by becoming a bat expert and citizen scientist.

“We see these steps as a natural progression,” said Mies. First, you become educated, then you help because doing so benefits you, as bats will eat pesky insects around your home. Then you take things a step further and help others.

Coming up in the next few months is the launch of a kids club, Garofalo said. Details are under wraps. “The kids club is designed as a way to get kids excited, not only about bats but for conservation as well,” Marcato said.

The group has teamed up with the U.S Fish and Wildlife Service for some of the material. And there is also the 15th annual Great Lakes Bat Festival Sept. 17 at the Macomb Intermediate School District in Macomb, Michigan.

One interesting thing we’ve noticed is that bats are a lot like humans; they have friends, preferring certain bats, and even people, to others, Mies said. “They have long term memories, and long term relationships, not only within their own family, but also with those outside their family.”

2 thoughts on “Conservation in the bat zone”