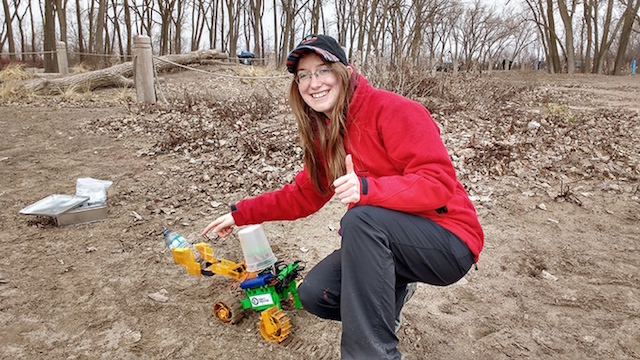 A robot designed by a maker in Toronto could soon be clearing up trash strewn across shorelines everywhere.

Erin Kennedy is the founder of the project to design a robot to collect trash on rough shorelines that would otherwise be difficult to clean up.

She used a 3D printer to print out parts that were then assembled to create the robot, Kennedy said.

This project fits in perfectly with Robot Missions, a project Kennedy started to help makers and humanitarians collaborate on projects to improve the environment, according to its website.

Now she has launched a Kickstarter campaign to raise money to further develop the robot. That campaign ends June 6th.

Kennedy, who says she is in her early 20s, started working on the project last year through a fellowship for young leaders called Studio Y.

The government-funded fellowship based in Toronto accepts 25 people under the age of 29 each year, said Stephen Clare, a Studio Y fellow and volunteer for Kennedy’s project. The program lasts for eight months and fellows take classes and work on self-directed projects. 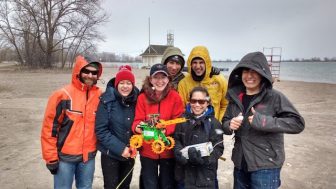 This project was meant to explore Mars, but while testing the robot’s capabilities on sandy shorelines, Kennedy realized it could have applications here at home, she said.

So far, the robot has gone on two field tests where it was challenged with picking up objects and moving them over different terrain.

“It’s good to be able to test the robot in a real world setting,” Kennedy said. We can “learn about the capabilities and the changes that we have to make to the design in order to make it better.”

measurements, said she was inspired to help with the project by Kennedy’s passion.

The crew tested the robot over fine grain sand and tree roots to see if it could handle going over rough surfaces, Elmi said. It performed well across all surfaces.

The group also tested how well it could move from grass to sand, Clare said. Its attachments were also tested – one that checks soil quality and one that collects debris.

The  common task throughout all the field tests is collecting debris, Kennedy said. “We usually modify the arm design with the claw for each field test.” 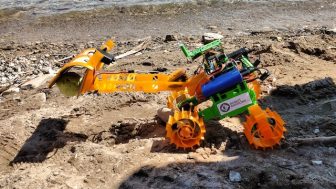 The robot is designed to pick up medium-sized trash, such as plastic water bottles and tennis balls, so they can be recycled properly. But Kennedy plans on creating an excavation system that will be able to collect debris that is much smaller.

“When we get the excavation system done and it’s able to sweep up the smaller pieces of debris, that will be way more efficient than doing that by hand,” she said.

The robot is operated by remote control to avoid damaging nature, but there is also the potential for it the robot to operate without a human controlling it, Kennedy said.

Collaborating with local drone clubs is a first step toward that goal, she said. Drones could be used to find a path for the robot to travel before sending it out to collect trash.

It would take a lot of different combinations of technology to get the robot to be autonomous, she said.

The next step involves many more field tests throughout the summer and small revisions to the robot’s design.

After those tests are complete, the robot will be deployed in August on Toronto Island in Lake Ontario to clean up the shoreline, Kennedy said. The goal is to collect around 11 pounds of debris there.

There is only one robot at the moment, but Kennedy hopes that enough of the debris from Toronto Island will be plastic, which could be recycled to create a second robot. She launched her Kickstarter campaign with a goal of raising $7,968 by June 6.

All proceeds will go toward funding the field tests and paying for transport and supplies for the crew and upgrades for the robot. So far $1,514 has been raised.

The outlook is optimistic, mainly because of Kennedy’s success with previous campaigns and her outstanding resume, Elmi said. Kennedy has mentored youth, created educational robots to teach kids about robotics and has been featured on the Discovery Channel.

“Regardless of what she does in the future, you know that it’s going to be done with great passion and attention,” Elmi said. “I think people will be excited to support her in this particular effort because it is a meaningful one and it matters to all of us.”

There’s a lot of interest in the project because it combines robotics with environmentalism, creating a robot with a social imp

The long-term plan is to make the robot available for anyone to reproduce.

“When portions of the design become more concrete, we will be releasing them as an open source,” Kennedy said. Anyone with access to a 3D printer and the technology needed would be able to create their own robot and use it in their local community.

That could lead to cleaner shores and protecting the environment one robot at a time.