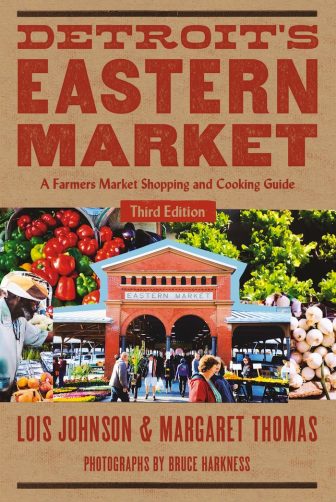 Watch for drool as you flip through Detroit’s Eastern Market: A Farmers Market Shopping and Cooking Guide.

The guidebook brings the sights, sounds and smells of Detroit’s first open-air market to life through the work of authors Lois Johnson and Margaret Thomas.

Thomas became enthralled with Eastern Market after moving to Troy, Michigan, more than 20 years ago

“I looked for info on the market, but there really wasn’t much out there,” she said. “This place was so full of history and magic, I had to find someone to help write a book about it.”

After meeting as volunteers at the Detroit Institute of Arts in the 1990s, the duo began working on their first book.

It is both a history lesson and an up to date guide on vendor locations and sale items. Each chapter is littered with personal testimonies.

“People were happy to contribute,” said Johnson. “There’s nothing that brings more memories to people than Eastern Market.”

After its initial release, the book was quickly picked up for a second addition by Wayne State University Press. The third edition released May 2 costs $24.99.

Stories from market vendors and visitors are often heartfelt recollections of what the market means to the community.

One man’s father became ill and began going to market every Saturday. The son continued this tradition after his father’s passing.

“It became by kaddish, a spiritual thing to do,” he says in the book.

Other stories play on the economic success Eastern Market has brought to the city.

According to the book, an Air France executive sampled the French-inspired lava cakes at Chez ChloÃ© and immediately signed a contract with the owner.

The lava cakes are now served regularly to passengers traveling by air from Detroit to France.