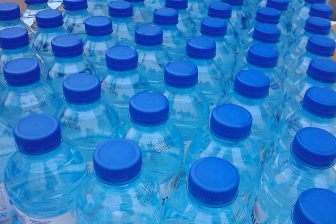 There’s another move underway in the Legislature to expand Michigan’s 40-year-old beverage deposit law to include water and juice containers.

But prospects for passage this year appear unlikely.

The latest effort would add the current 10-cent deposit requirement on metal, glass and plastic carbonated beverage containers to include noncarbonated drinks, with exceptions for milk, other dairy products, unflavored soymilk and unflavored rice milk.

The major additions would be water, juice, wine and liquor containers.

The law that voters approved in 1976 covers containers of one gallon or less of “soft drinks, soda water, carbonated natural or mineral water or other nonalcoholic carbonated drink; beer, ale or other malt drinks of whatever alcoholic content or a mixed wine drink or a mixed spirit drink.” It took effect in 1978.

The lead sponsor of the new bill, Democratic Rep. Jon Hoadley of Kalamazoo, said, “When I introduced it, I had a ton of popular support. The reality is that the current bottle law is working well,” so expansion “makes a ton of sense.”

It would create a “direct economic incentive for every individual who purchases” the additional beverages, Hoadley said.

The other sponsors, all Democrats, are from Dearborn Heights, St. Clair Shores, Clio, Detroit and Oak Park.

Legislators have unsuccessfully introduced similar proposals during the past four decades. Most recently, Sen. Rebekah Warren, D-Ann Arbor, introduced bills in June 2013 and March 2015 that didn’t move out of committee. House bills in May 2012 and February 2013 suffered the same fate.

But he’s not optimistic.

“More realistically, there doesn’t seem to be a lot of political will to expand it at this point,” YoungeDyke said.

“We’re really concerned about making sure we maintain the bottle bill we currently have so we don’t lose it,” he said. “There are probably some folks who would like to see it go away.”

The current law was designed primarily to reduce litter. It’s had a visible impact on natural areas, he said.

When about 100 MUCC volunteers cleaned a portion of the Manistee River south of Tippy Dam in Manistee County last summer, “we filled up half a trailer,” mostly with debris such as tires – not cans, YoungeDyke said.

The focus of the law and its proposed expansion has shifted to recycling – with economic and political implications, according to Kerrin O’Brien, executive director of the Michigan Recycling Coalition.

The coalition supported expansion in the 1990s, but “since that time, the issue has gotten more murky for us,” O’Brien said.

One processes redeemables through retailers and vendors that pick up the returned bottles and cans for recycling. The other depends on curbside and community programs that accept a wide range of materials.

“The challenge is that aluminum cans and PET bottles represent high-value recyclables,” O’Brien said. PET bottles are plastic and labeled #1. They are used for water, juice and soft drinks. Those with a 10-cent incentive means they are unavailable to help community programs offset the cost of processing low-value recyclables such as tin cans and glass.

“If we’re not processing those water bottles, we’re losing a volume of material that could help pay for recycling the rest of the materials,” O’Brien said.

Among the anti-expansion advocates is the Michigan Retailers Association.

“We want the bottles and cans out of the stores because they come back in a lot of cases dirty, filthy and filled with all kinds of garbage, and here we have stores filled with consumables” such as produce, said Tom Scott, senior vice president of the retailers group.

On a practical level, Scott said stores don’t have machines that can handle a lot of the different size and shaped containers the expansion would cover.

The existing law already discourages people from recycling other types of waste, he said.
“Michigan overall has a pretty low recycling record,” partially because the deposit law “has given consumers a false sense that they’re being good consumers by taking their bottles back, but that’s only part of it,” Scott said.

Returnable beverage containers account for 2 percent of the state’s waste stream, with more than 90 percent of them redeemed, according to the Department of Environmental Quality (DEQ).

“On every other reusable product — glass, paper, plastics, metals, organics — Michigan has fallen behind. Our residential recycling rate is only 14.5 percent, lower than every other Great Lakes state, and one of the lowest in the country,” DEQ says on its website. “The rest of our waste — $435 million worth of reusable materials annually — goes straight into a landfill.”

The Michigan Recycling Coalition’s O’Brien said under the proposed expansion redeemable containers would account for a maximum of 5 percent of the waste stream.

Overall, the state’s recycling rate “is hovering at around 15 percent,” – about half the 30 percent target set by Gov. Rick Snyder’s recycling action plan – “so we have a long way to go,” O’Brien said.

Hoadley, the sponsor, said he also backs other measures to promote recycling, including a recent unsuccessful attempt to fund a statewide recycling initiative.

“I don’t think any of the other work that’s happening should distract from this bill,” he said, adding that he’d like a hearing by the House Natural Resources Committee.

One thought on “New proposal would add deposit to water bottles”