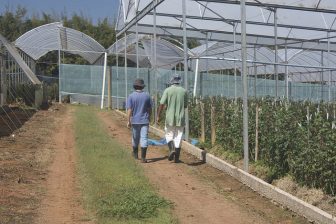 Michigan had more than 40,000 migrant and seasonal farm workers in 2013. Image: Avery via Flickr

The number of foreign seasonal farm workers pouring into Michigan and the legal and economic challenges they face are rapidly growing, say some legal and agricultural experts.

The increase is the result of contractors bringing workers into the country under temporary visas called H2A visas. They are often referred to euphemistically as guest workers, said Tom Thornburg, co-managing attorney at Farmworker Legal Services, a Kalamazoo-based legal advocacy group for  agricultural workers.

The number of these guest workers from other countries has doubled every year since 2012, he said. In 2015 they numbered 928.

The number of labor brokerage companies bringing these workers to Michigan has grown from none in 2012 to nine in 2015, he said.

Workers with the H2A status are different from traditional migrant workers in that most migrant workers are either permanent legal residents or U.S. citizens who live in Michigan year round or travel from the southern U.S. or Mexico to Michigan seasonally. H2A workers reside in the U.S. temporarily, said Teresa Hendricks, executive director of Grand Rapids legal advocacy group Migrant Legal Aid.

Their numbers are growing due to a shortage of traditional migrant farm workers, said Craig Anderson, agricultural and labor safety services manager for the Michigan Farm Bureau. This shortage is due to competition from other seasonal employers in the tourism and construction industries as well as the increasing difficulty some migrant workers face traveling between the U.S. and Mexico.

Farmers are allowed to hire guest workers only if they are experiencing a shortage of traditional migrant workers, Thornburg said.

Michigan had 41,395 migrant and seasonal farm workers in 2013, according to the most recent statistics from the state’s Interagency Migrant Services Committee. Migrant workers travel from farm to farm in pursuit of new jobs after their previous job ends. A seasonal farm worker may remain stationary in anticipation of the next harvest.

The growth in numbers of the H2A workers threatens some of the more traditional migrant farm workers who may return to seasonal jobs they’ve held for years only to find they’ve been replaced by guest workers, some Michigan agricultural labor experts said.

One had been working for the same grower for the past 10 years, she said.

The H2A workers also face challenges. They are often more open to abuse because of their lack of familiarity with American labor laws and the English language, Thornburg said.

Some efforts are undertaken by farmers to help, Anderson said. “Agriculture is the only industry required to provide information in the language of familiarity to the worker.”

Farmworker Legal Services routinely fields complaints that workers are not paid what they are promised, Thornburg said. The agency has represented a group of corn farm guest workers who were paid by the acre rather than by the hour. They say that the number of acres their employer claims they worked is inaccurate.

“We’ve seen employers deduct the cost of meals, insurance and sometimes taxes where there is no real legal authority to make those deductions,” he said. Some workers report having wages withheld to be later paid back in a lump sum, or never paid back at all.

Many guest workers do not complain out of fear they will be fired and deported, as their visas are dependent on their employment stateside, he said.

Some borrow money for their travel here, with the intention of repaying those loans from their wages, he said. “If they don’t want to complain about how they are paid there won’t be any investigation or enforcement.”

Further complicating the process of guest worker advocacy is the advent of consulting firms that obtain H2A visas and transport guest workers to the U.S., Hendricks said.

“It used to be farm operators were the ones who applied for H2A visas,” she said. “Now it is handled by corporations that you cannot connect with the actual job site.”

This can make locating abused guest workers difficult, she said. “It’s like trying to track a moving target.”

Advocacy groups such as Migrant Legal Aid and Farmworker Services are provided with the addresses, worksites and farm names of where guest workers brought over by Great Lakes Agriculture Labor Services can be found, said the bureau’s associate labor program coordinator Katie Rasch.

In addition to seeking recourse through Migrant Legal Aid or Farmworker Legal Services, workers are provided with the phone number of the U.S. consulate to which they may report abusive behavior by their employer, she said. “If they have an issue, we encourage them to go to their employer first.”

The process of remedying disputes with an employer is more complicated for guest workers because the protections outlined in the Migrant and Seasonal Agricultural Worker Act do not apply to guest workers, Hendricks said. The act ensures that federal, state and local laws regarding treatment of migrant and seasonal workers are followed and that the terms and conditions of workers’ contracts are honored.

Pursuing a case in court is also more difficult for guest workers because their residence in the U.S. is temporary, she said.

Editor’s note: This story updated 5/10/16 to clarify minimum pay rates for H2A work regardless of who does it.