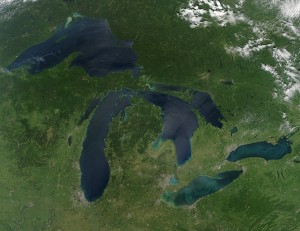 A new poll shows that people are split on whether the environmental health of the Great Lakes is getting better or worse.

About 18 percent of the those polled by the International Joint Commission say the lakes are improving. Another 26 percent say they are getting worse and 30 percent say they are staying the same, according to the poll by the U.S./Canadian agency that gives advice to both nations on how to protect them.

“There’s a great need to increase public awareness of issues and how to implement policy to fix them,” said Frank Bevacqua, public information officer for the International Joint Commission.

About half the respondents identified pollution as the most significant problem facing the lakes; 31 percent didn’t know what it was. Most people — 74 percent – were most concerned over the health of the lake near where they lived rather than the Great Lakes as a whole.

The commission is launching a new communication strategy to connect citizens with scientific strategies and political action. A newsletter with scientific research and policy initiatives within the Great Lakes basin will be released in mid-May.

“We recognize that not every citizen is going to be an expert on the scientific issues, but it’s important for people to have a basic understanding of the problems Great Lakes water quality is facing,” Bevacqua said.

Although 78 percent of people mentioned the importance of individual responsibility in protecting the Great Lakes, “there are also a lot of people who don’t know what that means,” Bevacqua said.

David Ulrich, the co-chair of the U.S. Great Lakes Water Quality Board, said he was disappointed with the lack of general awareness of water quality issues.

The Great Lakes Water Quality Board is the principal adviser of the International Joint Commission. It conducted the survey in November and December 2015.  A total of 3,950 interviews were conducted by telephone; 70 percent of respondents were between 18 and 54 years old

The poll found that 85 percent of those surveyed believed it is very important to protect the Great Lakes basin.  It found that the Great Lakes are valued most for their recreation, but their role in public health, the protection of fisheries and wildlife and state economies also ranked high.