The unanimous three-judge panel rejected arguments by the National Parks Conservation Association and other groups for review of the Minnesota Regional Haze State Implementation Plan and its “reasonable progress goals.”

The decision means states have another option to control visibility pollution in major federal parks and wildernesses without directly considering the areas themselves, according to the environmental groups.

Minnesota has five electrical generating plants that affect visibility at the Boundary Waters Canoe Area Wilderness and Voyageurs National Park in Minnesota, as well as at Isle Royale National Park in Michigan, according to the decision.

It said, “Minnesota’s contribution to light extinction for Boundary waters is 28 percent and for Voyageurs, 31 percent.” But emissions in Wisconsin, Illinois, Iowa, Missouri and North Dakota also affect visibility impairment in these areas.

Under that rule, states must propose plans to meet federal air quality standards and to reduce haze-causing emissions, including sulfur dioxide and nitrogen oxides. 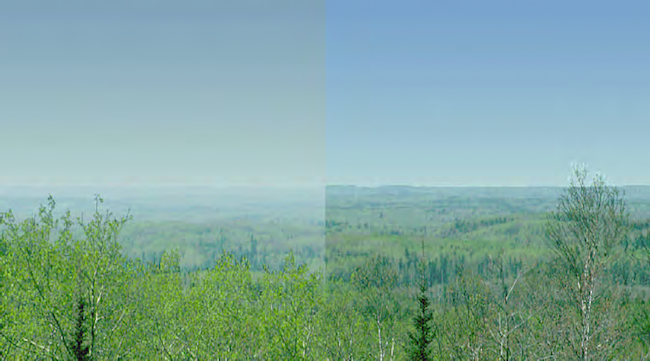 In June 2012, the EPA determined that emissions trading programs in the Cross-State Air Pollution Rule could be used instead of source-by-source technology updates that are currently required by the BART — Best Available Retrofit Technology — program to improve visibility.

Days later, the EPA approved Minnesota’s plan to use the alternative to control visibility at Boundary Waters and Voyageurs.

“We did not believe the finalized plan was sufficient to protect the region’s largest, most iconic national parks and wildernesses,” said Stephanie Kodish, director and counsel of the Clean Air Program at the National Parks Conservation Association.

“The underlying data show that the areas affected by Minnesota sources would have been better off if the source-specific pollutant controls of BART were required,” Kodish said.

According to the EPA, the Cross-State Air Pollution Rule is better than BART “because the overall average benefit to these areas is bigger” than if every pollution source were required to implement BART.

Minnesota is the only state to adopt a plan that relies on the Cross-State Air Pollution Rule instead of BART. The state was able to implement the haze plan because it waited for the “better than BART” rule to be passed in 2012.

“The rule basically exempts the states that are participants in the [Cross-State Air Pollution Rule] from doing source-specific BART,” Kodish said.

Despite pushback by conservation groups, the appeals court determined that EPA was within its rights in relying on the alternative program.

In an opinion written by Judge Duane Benton, the court said, “EPA acted rationally within its sphere of expertise.”

The court refused the groups’ request to review the plan.