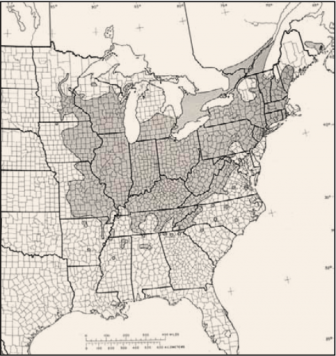 Most butternut trees in the Great Lakes region are dead – victims of an as-yet unstoppable fatal fungus – and the survivors may be doomed as well, leaving a hole in the diversity of the region’s hardwoods.

Butternut canker has killed an estimated 90 percent or more of Michigan’s butternut trees – also known as white walnuts —for example, said Mike Ostry, a research plant pathologist who studied the fungus from the 1970s until last May, when he retired from the U.S. Forest Service’s Northern Research Station.

“In some respects, butternut canker is far more serious than the chestnut blight in what it does to its host,” he said.

The cankers are elongated sunken areas in branches, trunks and exposed roots, according to a study published by Purdue University Extension. As the disease advances, it girdles and kills the trees.

“This is a disease of great concern,” Ostry said. “It’s really having an impact.”

And Keith Woeste, a Forest Service research geneticist based at Purdue, said, “There is no place that’s unaffected. We can go back into large holdings or small woodlots or trees isolated from the whole world, there’s canker on all of them.”

In fact, the butternut faces a “double-whammy,” he said, beset both by the fungus and by the need for highly disturbed habitat such as land hit by logging, bulldozing, fire or wind damage so it can regenerate.

Meanwhile, growers of black walnuts and Carpathian English walnuts say they are worried about the possibility of the deadly thousand cankers fungus reaching the state.

“It’s not yet in Michigan but it could be a matter of time before it gets here,” said Clay Ottoni of Waterford, first vice president of the Michigan Nut Growers Association.

Dennis Strahle of Eagle, Michigan, who heads the state association’s Walnut Special Interest Group, said, “It’s in Ohio. It’s in the Midwest.” And the Forest Service said it’s been found in Indiana on its move from the West.

Butternut has been of relatively small economic value in the region and has been used primarily for furniture, veneer and other wood products.

However, Ottoni said black and Carpathian English walnuts are more widely used for eating and baking. Their wood is also highly valued.

Scientists discovered the butternut fungus – which the Forest Service describes as “extremely virulent” – in Wisconsin in 1967.

Since then, it’s been found as far east as New Brunswick and as far west as central Minnesota. Its northern range includes Michigan’s Upper Peninsula and southern Ontario and Quebec.

Canada lists the butternut as an endangered species but the United States doesn’t.

The origin of the butternut fungus remains unknown, although Asia is a possibility.

However, scientists know how it’s spread: insects, wind, rain splash, spares that stick to animals and infected firewood and cut logs that are transported from one place to another.

According to Ostry and Woeste, the results so far of efforts to use genetics research to propagate canker-resistant trees have proven disappointing.

Ostry said that despite decades of research, “many of these beautiful trees that were growing among these dead and dying trees are now cankered. Some trees are just able to fight it off longer than others.

“It looks like it will be an uphill battle to breed resistance,” he said.

“When these epidemics first pass over the landscape, you hope maybe that the trees that remain have some additional level of resistance. It’s possible but the evidence we have now is that the amount of resistance to butternut canker that’s present within true native butternut is very low, from poor to non-existent,” he said.

Even without the disease, the fate of the butternut may be sealed, according to the Purdue Extension study, which said, “If no disturbance such as fire, wind damage or timber harvesting occurs to create open regeneration areas near aging butternuts, they may disappear from forest stands even if they do not contract the canker disease.”

At the same time, Woeste said he’s “a little more optimistic” about the possibility of controlling thousand cankers disease.

“It’s far too early to say thousands cankers will not be a big problem, but it’s reasonable to hope that. And there’s no reason for people to get into panic mode,” he said.

Ottoni, of the Michigan growers group, cautioned that other threats loom as well.

“I grow hazelnuts. There’s a blight for that,” he said. “Everything you plant today is being attacked. That’s the worst part.”