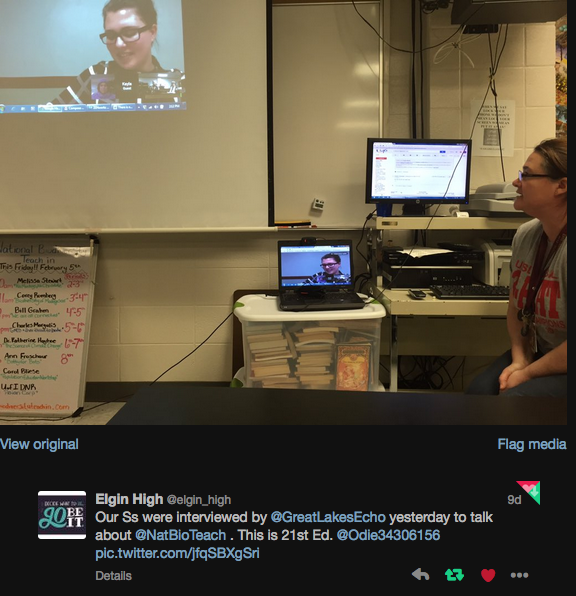 It’s 2 p.m. in Lansing, Michigan and I’m scheduled to join a Google hangout with a group of Elgin High School students. They’re in Illinois and I didn’t account for the time change.

Once we connect, my nerves about my first group interview via the web settle as a classroom of high schoolers, their principal and two of their teachers excitedly greet me.

Debbie Perryman, the Advanced Placement environmental science teacher at Elgin, welcomes me and another talking head in the corner of my screen. I discover that she is Dory Stolley, a wildlife biologist for the U.S. Fisheries and Wildlife Service.

When I emailed Perryman to schedule a run of the mill phone interview, she quickly offered the hangout as a better way to connect with her project’s foot soldiers.

I’m logged in to discuss the school’s National Biodiversity Teach-in. Like our interview, the project is run primarily through the Internet. Scientists, documentary filmmakers and professional environmentalists conduct webinars from all over the country while high school students from around the world listen in and ask questions

The Elgin High students host the event, working a variety of jobs to make sure everything goes off without a hitch, Perryman said.

Last year the teach-in hosted more than 8,000 participants. A map hanging in the classroom is dotted with pushpins signaling the states and countries from where people have registered for the webinars.

The series started Feb. 5. Registration is still open for the 26 speakers left on the lineup. Webinars are scheduled for Feb, 19 and 26.

The speakers include Philippe Cousteau, the host and executive producer of Awesome Planet, and Kimberly Wasserman, a recipient of the 2013 North American Goldman Environmental Prize.

Stolley, who is also the program manager for the GoldenRod Foundation, a nonprofit organization dedicated to coastal habitat conservation in Southeastern Massachusetts, will explain osprey conservation this Friday.

Her partnership with the Teach-In has been beneficial for the students and herself, Stolley said.

“I’m inspired by what the class does and how they tackle all the technical things,” she said. “It inspires me to approach my job with much more enthusiasm.”

The students are “constantly communicating with people,” and often “stepping outside of their comfort zones,” said Hadley Copeland, an Elgin High School senior.

That’s an important component of the project. In fact, Echo became aware of the project because the students tweeted us its existence. 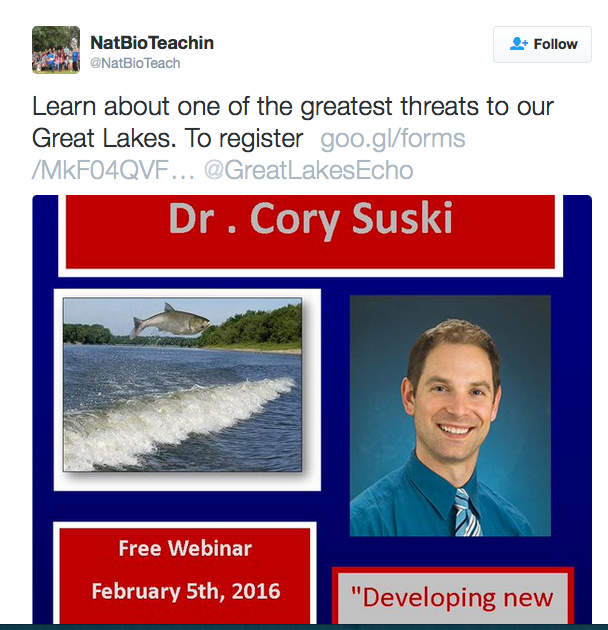 “One of the things we’re trying to build is a growth mindset,” Perryman said. “The relationships we’re building with our partners and this whole experience allows students to find solutions and offer solutions.”

Perryman and Brigid Trimble, an environmental science teacher at Elgin, brainstormed the Teach-In idea after their 2012 class became extremely concerned with the death of the last passenger pigeon.

“They were shocked that these birds could be wiped out by human consumption and wanted to do something about it,” Perryman said.

Perryman told her boss she was about to do something big and out of the ordinary, and she was met with support.

“Whatever you want, we like to push the envelope and be innovative,” said Jerry Cook, Elgin’s tech savvy school principal.

Perryman remembers it as “Go big or go home.”

Whatever the supporting phrase, Perryman received the support she needed to start her project on biodiversity.

Securing funding was the next step.

“We needed something professional if we were going to make this work,” Perryman said.

The teachers and students began “emailing random companies” to get support, said Perryman. Eventually they were contacted by OmNovia, a company tht hosts interactive web events, such as webinars. It gave the students access to their site for a greatly reduced price.

Along with some initial grant money, the environmental science class eventually received funding by the National Geographic Society Education Foundation.

“We all develop skills that will be useful in the future,” Keonavongsa said.

Student Carlos Rodriquez is focused on law school, but his experience with the program has developed a sense of urgency towards using his future skills to conserve the planet.

Although they have an epic webinar series lined up, the students were just a little bummed that Morgan Freeman wasn’t available to speak.

One student had been derailed by so many agents, she ended up with phone numbers that had no relation to the environmentally engaged actor.

“He was the speaker that got away,” Perryman said.

Registration for the webinars is free and can be found here.