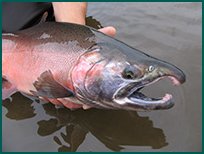 Forget about the debate over vaccinating kids. There is no debate that vaccinating fish can allow for the aquaculture industry to grow.

A recent study, published in the Journal of Vaccine, shows that a new technique offers the ability to give fish two vaccines at a time. That’s important because it could save time and money for fish farmers trying to expand a multi-million dollar industry.

A traditional method is to vaccinate fish by injection. But mixing more than one vaccine in the same injection can inhibit their effectiveness.

Use of vaccines in the aquaculture industry is analogous to its use in the livestock industry.

In these fish farms, fish are kept at high densities, which allow disease to spread extremely easily, said Carolyn Schultz, a former research assistant in the Fish Health lab used by the Michigan Department of Natural Resources and who now is an assistant professor of Fisheries and Wildlife at Michigan State University.

Fish farmers often use surface water from a lake or river in their tanks, and it’s not uncommon for this water to have bacteria or disease, Shultz said.

“It is very easy for bacteria and parasites to get into a (fish farm) if they have surface water,” she said.

To eliminate the bacteria, a fish farmer may use ultraviolet light to kill it. That doesn’t always work.

Other methods for keeping disease out of a fish farm include separating the tools used for different tanks, sterilization methods and antibiotics, said Ron Kinnunen an extension educator focusing on aquaculture for the Michigan Sea Grant.

Vaccinations serve like an insurance policy, reports Roy Yanong, professor and researcher in the Tropical Aquaculture Laboratory at the University of Florida.

That’s important because the industry could be the hidden gem of Michigan’s economy, said Jerome Kahn, the owner and operator of Cedarbrook Trout Farm in Harrisville, Michigan. Aquaculture is a $4 million to $5 million industry in Michigan, but with proper management and regulation it could be closer to a $50 million industry, he said.

Fish disease and parasites are a major threat to the aquaculture industry. Eliminating them is one of nine goals set by the National Strategic Plan for Federal Aquaculture Research to help grow the industry.

Vaccines are a proven way to battle disease for fish farmers. The vaccine study looked at rainbow trout, a species that Kahn recently added to his business. This addition created a 100 percent growth in sales with only a 25 percent increased production, he said. This shows that aquaculture has great economic opportunity.

In the Great Lakes states there aren’t nearly as many diseases as elsewhere in the United States, Kinnunen said. However, they do contain some very harmful diseases to fish.

The most recent example would be a strain of Viral Hemorrhagic Septicemia. The disease causes fish to bleed and eventually leads to death, according to the Minnesota Department of Natural Resources.

There is no vaccine for this disease, but the United States Department of Agriculture reports that it has been trying to develop one since 2010.

Because there is no vaccine for Viral Hemorrhagic Septicemia, all fish coming out of a Michigan fish farm must be certified free of this and other diseases, Kinnunen said.

New discoveries in vaccines allow for farmers’ fish to be healthy, and their business to be more profitable.