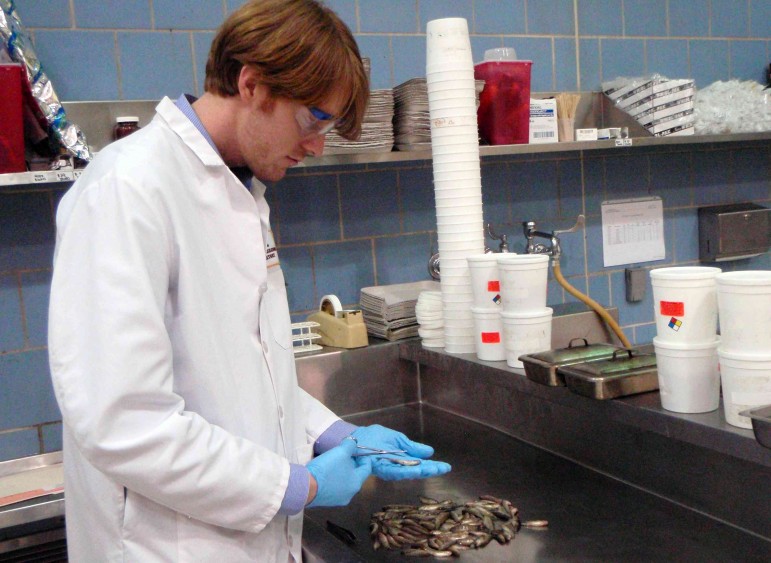 Although no fish with internal bleeding or bulging eyes have been reported by Great Lakes fish farms, a highly-contagious virus that causes such symptoms has bruised the profits of many in the industry.

Since it was first detected in the region almost a decade ago, viral hemorrhagic septicemia – or VHS for short – has been found in wild fish in all five Great Lakes, Lake St. Clair, the St. Lawrence River and several area inland lakes, according to the Minnesota Department of Natural Resources.

The Animal and Plant Health Inspection Service, a division of the U.S. Department of Agriculture, identified 28 Great Lakes fish species that are susceptible to the virus. It is primarily transmitted by infected fish that shed the virus into the water.

In response to VHS, in 2006 the federal government halted interstate movements of live fish between the eight Great Lakes states for two weeks, said Nicholas Phelps, a University of Minnesota Extension aquaculture specialist.

As a result, Harrietta Hills Trout Farm in Michigan lost 70 percent of its market overnight — even though it didn’t have any sick fish, said owner Dan Vogler.

“We had to completely remake ourselves during that time period, and it resulted in extreme financial hardship,” he said.

The federal order was revised later in 2006 to allow interstate shipment of live fish that are certified free of the virus, Phelps said. Although this federal order was lifted last June, state agencies continue to maintain existing regulations for disease testing and prevention.

Identifying potential disease carriers and creating effective regulations is not easy, said Allyn Spear, a research microbiologist with the U.S. Department of Agriculture.

To accomplish this task, just last month the National Aquaculture Association and the federal Animal and Plant Health Inspection Service proposed a non-regulatory framework for how producers can best monitor health and prevent disease.

VHS is a horrible disease that has been costly and time consuming for a lot of people, said Phelps. “But it has allowed for educational opportunity and I think advanced the industry moving toward something that is a little safer and in the long run sustainable.”

Phelps develops risk-based management methods for VHS. In 2014, he published research that recommended dividing each state into regulatory zones based on how close or connected they are to infected waters.

Michigan and Minnesota use this method, Phelps said. It allows low-risk farms to save time and money through less frequent testing.

This new test is 100 to 1,000 times more sensitive and only costs $10 per sample instead of the $17 it costs for testing now, Phelps said. And it reduces turnaround time from one month to a few days.

A downside is that such methods require killing fish to test their tissues.

However, research on a non-lethal alternative was recently published by Emily Cornwell, a veterinary student and postdoctoral fellow at Cornell University. It uses small tissue samples from fins or gills.

Although the method requires years of review before it could be approved for regulatory testing, it is valuable in disease surveillance, Cornwell said.

Different species of wild fish in Lake Erie and the St. Lawrence River have differences in susceptibility, Cornwell said.

Hybrid striped bass, which are farm raised in New York, are moderately susceptible, she said. Tiger muskellunge are also fairly susceptible. But walleye are fairly resistant.

“I think potentially if you are raising a species that is particularly susceptible, you may want to pay even more attention to your biosecurity protocol,” said Cornwell.

Spear and fellow researchers are writing a four-year plan to study VHS prevention in yellow perch raised in fish farms. Wild perch have decreased for a variety of reasons, leaving a potential market for Great Lakes aquaculture, he said.

The project would investigate if it is possible to breed fish that are more genetically resistant to infection. Previous research demonstrated that resistance can be passed to offspring, and similar selective breeding programs were successful in reducing bacterial cold water disease in U.S. trout, Spear said.

Another component of the project is to develop a vaccine for the strain of VHS found in the Great Lakes. Researchers will study how cells of infected fish react to the virus so that they can artificially trigger the same immune response.

“If we can understand how the fish naturally sounds the alarm, then we can make sure that when we design a vaccine that we are pressing those same buttons, and if anything we might be ringing the alarm louder,” said Spear.

An important goal is to make vaccines more affordable and easier to administer, said Spear. Techniques for incorporating vaccines into tank water may be preferred to traditional methods of injecting individual fish, particularly in treating highly-vulnerable young fish.

As the virus persists in the Great Lakes, researchers provide industry regulators and fish farmers with tools and knowledge to better manage a disease that may otherwise slow the industry’s growth.