Great Lakes aquaculture could become a $1 billion industry in Canada and the U.S., according to a 2014 paper.

One key for reaching that potential is for the Great Lakes states to follow Canada and legalize offshore aquaculture, reports the paper that was sponsored by Michigan Sea Grant, NOAA, Michigan State University and the state of Michigan.

Offshore aquaculture involves farm-raising up to several million fish in cages along the coasts of natural bodies of water instead of the inland practice of using large landlocked tanks. This allows fish to remain in their natural environment, and provides a more efficient way of harvesting them.

It is legally done in the ocean on both coasts of the United States. Only Great Lakes states have outlawed it.

In Canada, the practice has sustained dozens of farms in northern Lake Huron for 15 years. So why don’t U.S. states allow it in the same bodies of water?

“It comes down to public values and political pressures,” said Betsy Riley, a doctoral student in international fisheries policy at Michigan State University and who studies Great Lakes aquaculture.

When overfishing crashed the Great Lakes fisheries in the late 1800s, much of the commercial fishing industry migrated to Canada. That’s because better environmental regulations in Canada left fish populations more abundant, Riley said. The industry’s absence in the U.S. allowed recreational fishing to gain a strong political and cultural presence on that side of the lakes.

This, combined with environmental concerns for the fish waste, spawned legislation banning the practice in the states. And the practice is not without controversy in Canada.

Among those opposing it is the Georgian Bay Association, an environmental group representing more than 4,000 families who own land on Lake Huron’s Georgian Bay in Ontario. 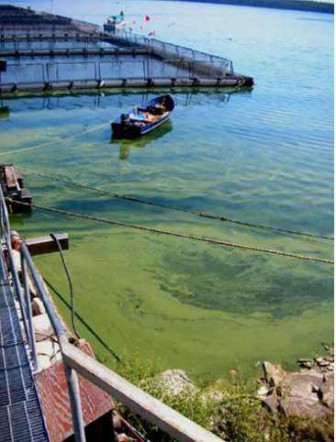 The group’s main concern with the practice is the highlevels of phosphorous and methane that accumulate from concentrated fish waste, said Bob Duncanson, the association’s executive director. High levels cause excessive algae growth and other eutrophication problems, according to the association.

Such problems depend on location. And some research indicates that fish waste in areas with few nutrients can help reverse their further depletion caused by invasive zebra and quagga mussels, Riley said.

Angling and hunting groups have expressed their concern for the environmental impact of fish that escaped from the cages, said Duncanson. He has testified before members of the Canadian Parliament that the more rapid-growing domestic fish could have a negative impact on the wild strain.

But some fishermen don’t seem to have a problem with it, said Chris Weeks, aquaculture extension specialist at MSU. The boosted ecosystem and numbers of escaped fish have attracted fishing boats to waters surrounding the cages.

The Georgian Bay Association would rather see the fish held in confined tanks with waste collecting drains. This practice is less efficient than the traditional cages and nets, but it eliminates the waste problem while still allowing lake water into the farms, Duncanson said.

But efficiency is what the traditional practice prides itself on.

A new relationship between inland and offshore fish farms is changing the entire Canadian industry in the name of efficiency. As offshore farms become more popular, some inland farms have converted to only raising fish until they are big enough to be kept in the offshore cages. They then sell the young fish to the more efficient offshore farms.

A 2006 valuation from Ontario’s McMaster University estimated that Canada’s Great Lakes aquaculture industry is valued at more than $65 million.

Profits can be explained by how efficiently aquaculture turns fish food into people food, according to the Sea Grant paper. Almost a pound of meat is produced for every pound of food fed to the fish. For cattle, it takes seven pounds of livestock feed to make a pound of meat. For chickens it takes three pounds.

Raising awareness might be enough to get U.S. politicians to support the practice, Riley said.

Although optimistic about the future of the industry, both she and Weeks hope to see more studies done on the environmental effects of offshore aquaculture before there are any major policy changes in the states.

A similar optimism is expressed in a 1999 publication by the Great Lakes Fishery Commission and the International Joint Commission. It urges both agencies to continue to study the long-term impacts of offshore aquaculture while providing management advice.

The small industry has huge potential, Riley said. Areas that can support aquaculture without harming the environment may do so if
it is successfully regulated.

“People should really keep an ear out for the issue,” she said.