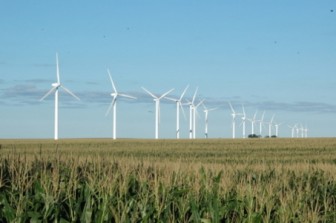 Michigan is on pace to meet its renewable energy targets, largely thanks to wind power, but issues of transparency and turbine placement have some asking whether the shift towards wind is a smart one.

The Great Lakes State is well on its way to drawing 10 percent of its energy from renewable sources by the end of the year, as required by a 2008 law.

Public Service Commission (PSC) communications specialist Judy Palnau said that achievement was thanks to a huge effort from utilities, with wind farms and turbines going up across the state.
To date, Michigan has 18 operational wind farms with another two in development, according to PSC’s wind farms map. 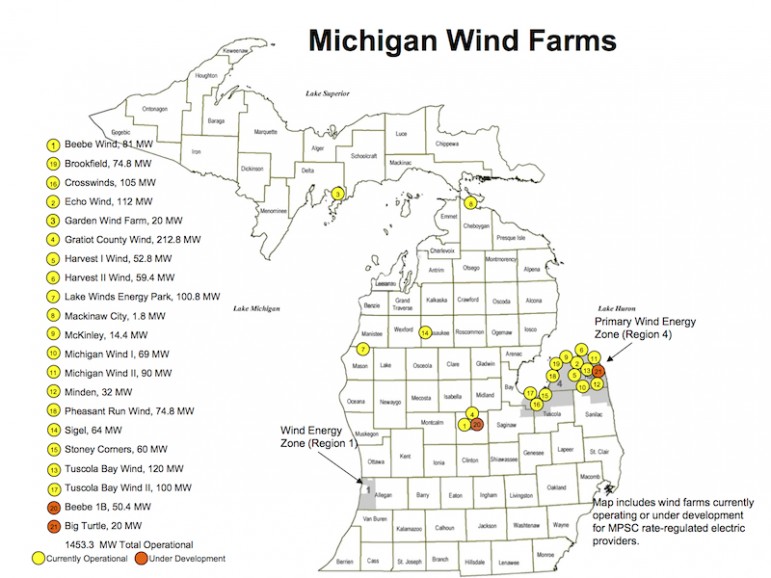 The primary location for wind energy in the state is Huron County because of its wind capacity. With nearly half of the state’s wind turbines already in the area, proposals for further expansion this year have the county reviewing a proposed moratorium.

Other counties in the state’s Thumb area are also considered prime sites by the utility companies, with the tip of the Thumb alone home to more than 300 turbines.

“The number-one type of renewable energy to reach that goal in Michigan has proven to be wind,” Palnau said.

With Michigan still getting 54 percent of its energy from coal, the Sierra Club is fully behind the state’s move toward wind energy, said Michigan Chapter Conservation Director Anne Woiwode.

“It’s an extremely valuable source of energy that provides clean, safe electric power,” Woiwode said. “Wind power is evolving, the price has been dropping, because it is very inexpensive way to create electric power as compared to fossil fuel generation.”

According to the American Wind Energy Association, the cost of wind energy has dropped 43 percent in the last four years.

Utility companies have passed these savings onto consumers, with DTE Energy reducing its surcharge from $3 per month to 43 cents this year while Consumers Energy eliminated it altogether, according to a 2014 Public Service Commission report.

Despite the savings, some argue the downside associated with wind power outweigh the benefits.

Residents who live near turbines complain of noise and flickering — a strobing effect – which occurs when the sun sits behind the turbine blades.

“The flicker off the blade at sunrise and sunset when the sun shines through casts a big shadow with a pulsating effect,” Lorencz said. “I have noise and I have the strobe effect. I don’t think developers took that into consideration.”

A lack of community consultation regarding turbine siting and zoning ordinances has left some residents calling for more transparency and filing lawsuits. A group of residents in the Upper Peninsula, for instance, filed a lawsuit in January against Traverse City-based utility Heritage Sustainable Energy and the U.S. government to stop expansion of a wind farm they say has caused more disruption than was promised, the Associated Press reported.

Consumers Energy settled a lawsuit with 19 plaintiffs in October in Mason County over the operation of Lake Winds Energy Park near Ludington, according to press reports. Plaintiffs were seeking closure of the wind park, complaining of sleeplessness, headaches, dizziness and economic loss.

The Sierra Club’s Woiwode acknowledged that wind farms have caused hardships for some people.

“Wind is a valuable part of our energy uses, but it’s not always right to put wind everywhere and some of the older designs may have had problems,” Woiwode said.

How residents react to wind farms and turbines depends on how they are treated in the process, she said.

“Where we have seen developments with less care and concern and consultation, we have seen more opposition,” Woiwode said. “There is no universal approach, but there clearly are better approaches that involve people early in the process.”

The State Wind Energy Forum, which explored the benefits and challenges facing the wind industry, played host to industry and government leaders and experts.

While future policy was discussed inside, outside, the Interstate Informed Citizens Council, a grassroots organization of citizens from across Michigan concerned about the actions and impact of the wind industry, protested the industry’s continuing expansion in the state.

“They measure from the foundation of a neighboring home rather than from the fence line,” he said. “With that you get flickering, you get noise, you get loss of amenity and destruction of view.”

Michigan is too permissive in its regulation of wind turbines, Martis said, which has led to citizen pushback.

Martis said when it comes to zoning and regulation, Michigan had a permissive history and is starting to see the effects of that in public reaction.

“The more experience people have with wind farms,” Martis said, “the greater regulatory burden they demand to be placed upon them.”