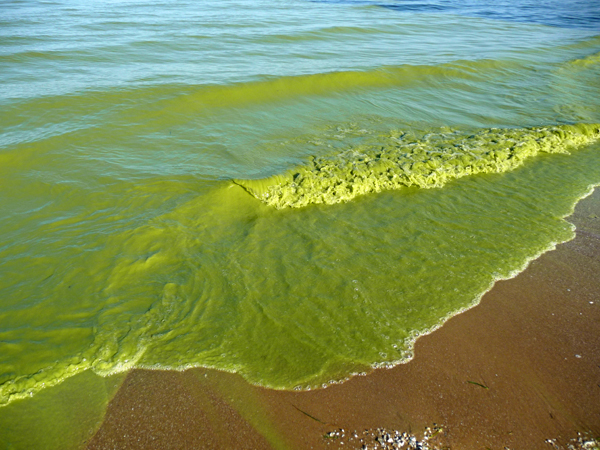 Lyman Welch, the water quality director of the Alliance for the Great Lakes in Chicago, called algae and blooms “a real threat to our entire Great Lakes region, not just Lake Erie.”

Lake Erie is the most susceptible of the Great Lakes to blooms due its shallow waters and the extensive agriculture-related industry along its shores. The growth in algal blooms directly relates to increased pollution from phosphorous used in farm fertilizers, according to scientists.

As farmers fertilize their fields with products containing phosphorous, this mineral eventually makes its way into watersheds around Lake Erie. This process is known as non-point source pollution.

Welch described Toledo as “a warning sign to the whole Great Lakes community that his problem must be addressed.”

Scott Higgins, a research scientist who studies algal blooms at the International Institute for Sustainable Development in Canada, said the problems in Lake Ontario are “a little different.”

Unlike phytoplankton blooms that float on the surface, benthic algae grow along the lake bottom, Higgins said.

“These blooms are nontoxic, but this is where it gets interesting,” he said. Although benthic algae may be nontoxic, its high microbial counts are potentially dangerous to humans and animals. Partway through the summer, these blooms deteriorate, get ripped off the lake bottom and get pushed up and deposited on shore, typically where beaches are.

The algae pushed to the surface form what are referred to as cladophora mats that research has associated with high microbial counts, he said. ”Some of these are human pathogens such as E.coli 157 and shigella.

Nancy Goucher, the water program manager at the Toronto-based environmental advocacy group Environmental Defence, described the toxic blooms in Lake Erie as “a canary in the coalmine with algal blooms in the Great Lakes” and described the water contamination in Toledo as “a sign that these could be stresses that are affecting other Great Lakes as well.”

Goucher said the severity of the problem in Lake Erie means that policy solutions will start there. “This means that Lake Ontario would be caught up in the second round for solutions there.”

Higgins said that while the focus politically may be on Lake Erie, “the solutions to both of these problems may be largely the same.”

“There are only so many farms in these watersheds,” he said, and while it’s theoretically possible to address the phosphorus issue, “the question is, in practice, is it politically palatable?”

Another, more complex solution he described, is to address the loss of wetlands in North America. These wetlands act as natural purifiers, purifying water before it makes its way into rivers and lakes.

Higgins said part of the solution beyond encouraging protection of current wetlands is to potentially add wetlands to prevent phosphorous from reaching rivers and lakes.

However, addition of wetlands could be too costly for government agencies to consider, he said.

Goucher described her outlook on confronting algal blooms in both lakes as optimistic.

“In the 1960s and 1970s, we saw blooms take over large parts of lakes, and this inspired businesses, governments and communities to come together to solve it and they did — blooms decreased for a number of years,” she said.

“The lakes today are different but the solutions are the same. It’s a big problem but we have solved it before and I think we can solve it again.”

2 thoughts on “Lake Erie isn’t only lake with algae headaches; Lake Ontario also on the hook”