Companies in Ottawa and Chicago are using drones to scare away birds carrying diseases that could threaten human health.

The “Goosebuster” clears geese off of Petrie Island adjacent to the city of Ottawa, said creator Steve Wambolt. The geese are confused by the drone, mistake it for a predator and fly away to nearby marshlands.

Their droppings contain E.coli, a bacteria that can be harmful bacteria. Ottawa city officials recently granted Wambolt a three-year contract to patrol the area during the summer.

“The city of Ottawa performs daily tests on the beaches for E. coli and publishes the results on their website,” Wambolt said. “It is clear that when no geese are sitting on the beach or at the water’s edge the E. coli count is very low.”

Wambolt is the owner of Aerial Perspective, a company that advertises high-definition aerial photos of structural damage and real estate. He built a 6-rotor drone for the Petrie Island job, costing him $6,000. He said the advantage of using this model is its stability.

“The drone can hover in place with no stick input,” he said. “This makes it ideal for aerial photography and chasing geese. It also allows you to attach more gear to it – for example, lights, sound systems, video gear, extra batteries and much more.”

Getting insurance to operate the drone was expensive, he said. His policy costs $3,000 per year and covers him anywhere in Canada. And obtaining permits in Canada can be tricky.

He would have to apply for a permit specific to each city to franchise his business. Currently his services only extend to Gatineau, Quebec, clearing geese for the same reason.

“I can use my Transport Canada permit in the Ontario flying region – this includes Gatineau, Quebec – but would not include Montreal,” he said.

Wambolt isn’t the only one chasing birds with drones. 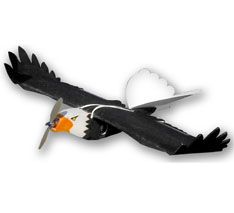 A Chicago-based company called Bird-X is using a “BirdXPeller Drone” to scare gulls and pigeons away from businesses along the shores of Lake Michigan. The drone looks like a bald eagle with a propeller as its beak. In operation for over 50 years, Bird-X offers pest control products globally.

Tom Olmstead, the company’s national account manager, says the birds invade warehouses containing produce. Workers find it difficult to get rid of them.

The bird droppings pose a health hazard and are corrosive to the buildings, he said.

That’s when Bird-X gets involved.

“If the FDA finds contaminated birds in food processing and food manufacturing facilities, the businesses could be shut down,” Olmstead said.

But the company hasn’t applied for a permit through the Federal Aviation Administration yet.

Permit requirements in the United States are in dispute.

Dennis Tilles, president of Bird-X, said the company does not need a permit from the Federal Aviation Administration but is required to carry an insurance policy for the drones.

“We do adhere to safe practices, such as operating the drone within eyesight,” Tilles said. “There are restrictions when operating near airports and airfields.”

But Thomas Rampulla, an aviation safety inspector for the Federal Aviation Administration said a permit is required for such commercial businesses.

“Commercial use is permitted if the aircraft manufacturer has obtained proper certifications for their aircraft,” he said.

Air power isn’t the only unusual way to get rid of pesky birds. Dogs can also tackle the job. Elizabeth Alm, a Central Michigan University biology professor, researched the use of collies to clear the gulls off the shores of Lake Michigan. The study was funded by the Environmental Protection Agency’s Great Lakes Restoration Initiative.

“The really nice thing about the dogs is that they are unpredictable to the gulls,” she said. “They can change their movements and change their interactions with the birds. This makes it less likely that the birds would habituate to the presence of dogs.”

Are drones or dogs most effective? Alm thinks both methods are an asset, depending on the circumstances.

“Dogs require a human handler,” she said.  “A drone might allow for more automation, a more hands off type of approach.  A ‘best’ technique would likely be dependent on a variety of factors – size of gull population, location of beach, etc.”

And bird droppings are not the primary problem for Great Lakes beaches, said Shannon Briggs, a toxicologist at the Michigan Department of Environmental Quality. Drones can’t control human sewage.

“Drones are not likely to be helpful because sources [of contamination] are typically underground or flowing in creeks, drains, rivers, streams, etc.” Briggs said.

However, Briggs thinks drones might be useful to help manage debris that is visible on the surface and for scaring excessive numbers of birds.