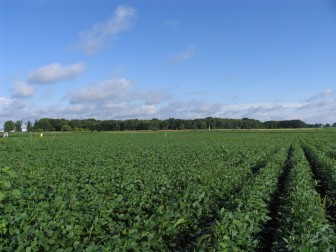 More crops were planted in the northern Midwest this year than last year, including Michigan, according to a federal report.

One reason may be that warmer temperatures are allowing for a longer growing season, said Jim Byrum, president of the Michigan Agri- Business Association. With frost starting later in the year, crops have more time to mature, he said. And higher temperatures are prompting crop production to expand to the north.

You can expect that trend to continue, Byrum said.

“As that moves north, as it has steadily over the past few decades, farmers will move production into areas that historically haven’t been able to support that kind of production,” he said.

Soybean production has moved into some of Michigan’s northern counties like Isabella County just north of Ithaca, said Paul Gross, a Michigan State University extension educator of crops and agriculture.

Farmers are also planting more land in Cheboygan and Alpena counties. The amount of land planted nationwide for soybeans and wheat has increased since last year, according to the U.S. Department of Agriculture June 2014 acreage report.

This could result in 84.1 million acres harvested, which is also 11 percent higher than last year. The amount harvested differs from the amount planted because crops can fail for weather, disease and other reasons.

While soybean and wheat acreage has increased, acres of corn planted has dropped 4 percent from last year nationally. Federal officials estimate this year that there are 91.6 million acres planted to corn nationally.

Although weather is a major factor, price also plays a role.

The number of acres planted last year was lower than what it could have been, Honig said. About 10 million acres didn’t get planted because of the weather.

The weather is better this year, which allowed farmers to plant more acres, he said.

But this year is not a guarantee for the future.

With the cold winter and the cooler summer, crops in the northern regions may not reach maturity, Gross said.

“We had the cool spring followed by a relatively cool summer,” he said. “If we have an early fall some of those northern, later planted, fields could be disasters.”

”We’ve been able to move some of those crops further north but there’s going to be years that might not work so well,” he said. “This might be one of them.”

This increase may not happen year after year but it has allowed for a huge opportunity for Michigan farmers to increase production, Gross said.

“We were able to produce more things on more acres in some northern Michigan lands that are primarily grass lands, acres that were farmed at one time that aren’t anymore,” Gross said.

As farming expands on these lands there is the opportunity to plant more crops and create more farm jobs, Gross said.

“Overall Michigan agriculture will continue to grow and thrive,” he said.