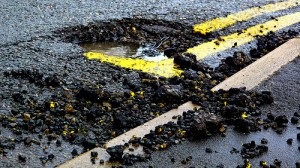 The rough winter has given Michigan’s road funding concerns a violent push into statewide spotlight as discussion swirls at the Capitol. But road commissions across the state are eyeing the immediate impact that deeply rooted frost has on a local level.

Last year, about half of Michigan counties were forced to convert paved roads to gravel, said Monica Ware, the communications and development manager for the County Road Association of Michigan.

Now, concern for winter’s impact is delaying the association from collecting data this year as they wait to see what spring brings to county roads.

“The frost in the ground is deeper than it typically is,” Ware said. “We could have a lot more damage this year than normal.”

Ware said higher amounts of damage to the roads could force the hand of county road commissions to convert to gravel as the only way to keep the roads safe.

An Emmet County road ravaged by the winter will almost certainly need to be pulverized into a gravel road if the township does not provide funds, said Brian Gutowski, Emmet County Road Commission engineer-manager.

More roads still might see similar needs as spring wears on, he said. Measurements show frost is 66 inches deep in some locations.

Michigan roads typically see about five feet of frost every year but this year there are reports of roads with about seven feet of frost, Pulver said.

Pulver said frost causes the pavement to soften. Heavy loads then break it up. If the spring thaw is slow, the deep frost likely will keep weight restrictions on roads longer.

Based on the 14-day forecast and three-month outlook from the week of April 11, the state is likely looking at a slower and gentler thaw, said National Weather Service Meteorologist John Kowaleski.

A shift to more gravel roads is not without consequences.

Their changing conditions day-to-day compromises the safety of motorists as compared to undamaged roads, said Michael Roper, the Cheboygan County Road Commission managing director. But once paved roads are damaged, changeable gravel roads might be preferred.

Gravel roads typically coat nearby buildings with dust and can pose a danger if inhaled, particularly for those with asthma, said Mark Christensen, the Montcalm County Road Commission superintendent-manager who’s lived on a gravel road all his life.

Dust is controlled by frequently spraying the roads with calcium chloride.

“The people that live there don’t like it, but it’s easier for us to maintain a gravel road instead of a potholes-riddled road,” Gutowski said.

About three years ago, Emmett County converted about 3.5 miles of road to gravel, Gutowski said.

Montcalm County has returned about 14 miles of roads to gravel over the past four years, Christensen said.

Three miles were converted after last winter and Christensen said it’s possible they’ll have to do the same after this spring if the harsh winter takes its toll and road funding continues to be an issue.

Clinton County has avoided converting paved roads to gravel thanks to millages and to townships finding money for road repairs, Pulver said. Additionally, Pulver said it’s been a happy surprise that the county roads are not yet appearing too damaged by the winter.

The issue of road funding has been an ongoing discussion in the legislature for years. Gov. Rick Snyder proposed an additional $1.3 billion for roads while House Speaker Jase Bolger, R-Marshall, and Rep. Wayne Schmidt, R-Traverse City, recently unveiled a plan to increase annual road funding by $500 million. The plan would change the tax rate on fuel and shift other allocations toward the roads.

The plan would eliminate the current flat 19 cents per gallon tax on gasoline and 15 cents on diesel and replace them with a 6 percent tax on a gallon of both fuels. The proposal also called for shifting other taxes and fees, increasing efficiency in the Michigan Department of Transportation and demanding better warranties on new roads.

But while legislators debate funding costs, road commissions are making do with what’s at hand.

“We’re all cutting back on everything we can to survive,” Roper said.

All Michigan roads need an investment from the legislature to remain in good condition, said James Lake, communications representative for the north region for the Michigan Department of Transportation.

With about $1 billion more per year, state highways could be repaired to make 90 percent in good condition and then maintained, Lake said.

Shifting paved county roads to gravel is the wrong direction for a state that needs significantly increased road funding, said Denise Donohue, director of the County Road Association of Michigan.

“Gravel roads are a real symptom of lack of funding and, frankly, some desperate measures to assure safety and passability on the roads,” Donohue said. “I think the average public and the driving public prefer paved roads.”