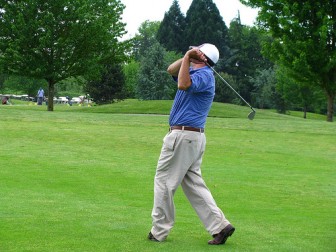 Golf courses in Michigan have reopened after a prolonged winter freeze that caused damage and set revenue behind for the season.

“People don’t want to go out golfing when it’s cold out,” he said.

The course opens as early as possible each year and even on days during the off-season when it is exceptionally warm.

Although Pohl didn’t expect the lack of customers in the early spring, ice damage to the course is costly. It could take up to six months for Royal Scot to catch up in revenues for the year, Pohl said.

Grass itself is not expensive but the labor and the fertilizer needed to cultivate it can add up over time, said Adam Ikamas, executive director of the Michigan Golf Course Superintendents Association.

“When a heavy frost sets in, the water inside the grass freezes,” Ikamas said. “Stepping on it shatters the cells and kills the grass.”

The ice storm also caused tree branches to fall onto the turf and snow blanketed the course, Pohl said.

“No one was able to get out and clean them up,” he said.

Melting snow can cause snow mold, a type of grass fungus that grows when moisture in the grass beds freezes.

“When you have ice and the snow, it can freeze the roots and choke them,” Pohl said. “And that can cause fungus.”  The fairways of a golf course–the green between the tee and the hole–are usually sprayed with fungicide, and melting snow can wash it away.

Gray snow mold and pink snow mold are two types of molds that affect golf course turf, said Jerry McConnell, a PGA professional at the River’s Edge Golf Club in Alpena. Gray snow mold is more common and treatable but pink is more devastating to turf because it can kill an entire bed of grass.

Unlike courses in the south portion of the state, northern Michigan golf courses are set to open late April, only about a week behind their normal reopening dates.

“In the north, it’s not as big of a deal because we expect it,” McConnell said.”We are about a week behind so we didn’t have it as bad, although it would have been nice to have a few more days.”

“It was so warm it devastated the cherry crop,” he said. The golf course also has a cherry orchard.

Weather-related challenges are something golf course managers expect to encounter every winter, but this is “by far the worst winter” his course has seen in years, McConnell said. It could take months to catch up in revenues, McConnell said he is not concerned.

Golfers “have an itch in the winter and they are eager to get outside,” he said.