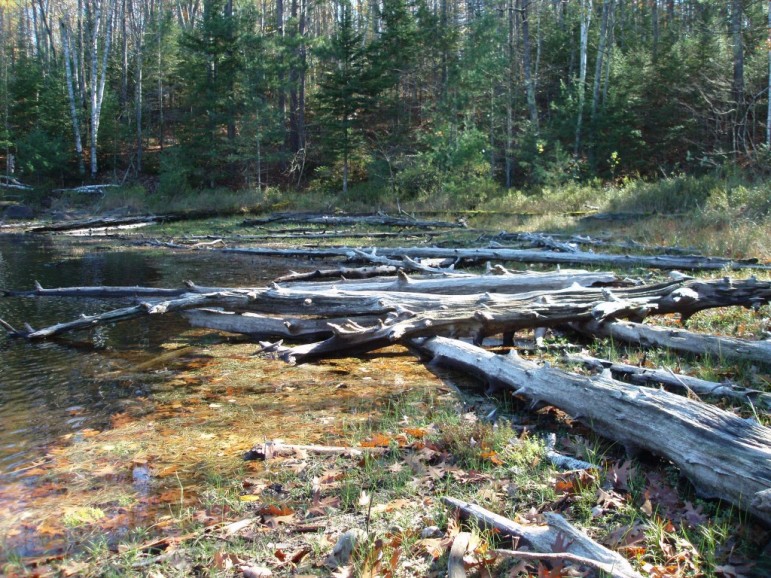 Coarse woody habitat that has mostly dried on the shore. Photo: University of Wisconsin Center for Limnology.

Low lake levels and wood loss are causing some fish to binge until they run out of food, according to recent research.

Jereme Gaeta, a researcher at the University of Wisconsin-Madison, studied the relationship between bass and perch as dropping water levels altered the habitat offered by submerged trees and wood.

“Woody habitat is great for many species of fish in terms of foraging for food,” said Gaeta. “It’s a place for algae to grow and bugs to live.”

Trees in lakes can also provide shelter. But when levels drop and the lake shrinks, trees that were once submerged can end up entirely on the shore.

That serves prey fish up on a wide-open smorgasbord for predator fish.

“With a loss of shelter, fish end up in what’s called the ‘foraging arena,’ which is where the prey and predators interact,” Gaeta said. “When we lose coarse woody habitat, you’re forcing those prey fish to live out there all the time, with no place to hide.”

The result? Predator fish gorge themselves on prey fish until there’s not many left.

Although Gaeta’s study looked at bass and perch in one Wisconsin area, he said he expects the problem exists in similar areas in the Great Lakes region.

“Minnesota, Michigan and up in Canada, particularly,” he said. “These results are applicable throughout timber regions you can find in the Great Lakes and throughout North America.”

Although he doubts coarse woody habitat loss would lead to any species’ endangerment or extinction, Gaeta is concerned that dropping lake levels brought on by climate change could remove fish entirely from specific areas.

“If lake levels continue to drop, I do think there are cases where species will be extirpated from lakes,” he said. “Or at least dropped to such low levels that the fisheries are essentially dead.”

“You really can’t predict, with some sort of accuracy, long-term lake levels. Sometimes short-term levels can be tough,” she said.

But while predicting and controlling lake levels isn’t a realistic option, there are other steps to help save habitats, Gaeta said.

“People want to build houses by lakes and appreciate nature, but they’re clearing away and moving the wood that helps nature,” he said. 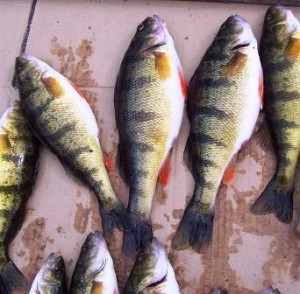 Gaeta said that the food web can be drastically altered when prey fish like perch, pictured above, are left without refuge. Photo: Lake Superior State University.

Gaeta said when building houses near a shoreline, developers need to consider leaving wood alone that they would ordinarily clear, and also purposefully placing any excess wood from development project into the lakes.

“Manmade” woody habitats are nothing new. Purposefully placing wood into bodies of water can create dams that control river currents and draw fish to certain areas to create a fishing hotspot.

Fred Sittel, vice-president of the Three Lakes Association in Bellaire, Mich., has been involved in multiple projects for woody debris placement for both current control and fishing purposes.

Sittel said that he thought if more people understood what wood can do for a body of water, they’d be eager to help.

“We never seemed to have a problem gathering people to help our projects,” he said. “It’s often an easy fix.”

And although Gaeta says that wood placement can’t fix everything, it’s a good way to help.

“The ecosystem may never go back to the way it was. We don’t know yet. But some of this is preventable, and we think we’ve shown how important this is,” he said.

One thought on “Wood loss turns fish into binge-eaters”