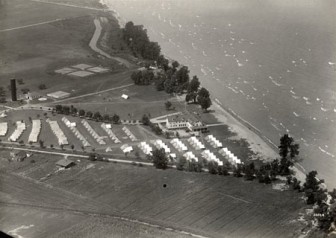 Environmental groups have won what they call a victory for birds with the suspension of a plan to build a wind turbine in Ohio.

Officials at the Camp Perry National Guard base in northern Ohio recently announced that they will indefinitely suspend plans to build a wind turbine after receiving complaints that it would threaten local migratory birds. The American Bird Conservancy and the Black Swamp Bird Observatory sent a letter of intent to sue to the Ohio National Guard, claiming the project violated federal laws protecting the birds, according to their press release. The groups claimed the turbine would be too close to the birds’ migration path.

A letter from the National Guard Bureau to the bird groups’ lawyer said that after receiving the letter of intent, the National Guard withdrew its Finding of No Significant Impact for the site. The letter said the bureau would review its environmental assessment of the project.

About 600,000 birds and 1 million bats die from collisions with wind turbines in the U.S., said Bob Johns, director of public relations for the American Bird Conservancy. President Barack Obama hopes to increase electricity from wind tenfold before the end of his administration.

“You can only imagine how much that number will increase,” said Johns. “We’re looking in the millions.”

The groups are not opposed to the use of wind energy in Great Lakes states, Johns said. “Wind energy has its place – certainly in the Great Lakes region and in other states in the U.S. All we’re saying is don’t site the turbines where they shouldn’t be sited.”

In recent years, the use of wind power in the Great Lakes region has grown dramatically. In 2012, Minnesota generated the fourth largest share of its electricity from wind out of all fifty states, according to the American Wind Energy Association, Ohio had the most wind power facilities out of any state.

Lindsay North, media relations and outreach manager for the wind association, said that impact on wildlife, especially birds, is always considered when constructing new facilities. According to a fact sheet by the organization, turbines cause only a small fraction of annual bird deaths while millions more die each year from collisions with buildings and high tension lines.