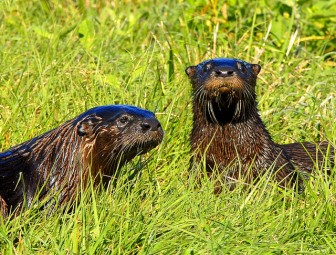 And biomonitor to track toxics that damage the health of an environment or ecosystem.

North American river otters play that role because they’re “apex consumers” in the aquatic ecosystem — meaning they’re at the top of the food chain. They eat primarily aquatic animals such as fish, turtles, amphibians and crayfish.

“Thus otters serve as biomonitors — organisms that contain information on the quantitative and qualitative aspects of the environment — of wildlife exposure,” according to a new study. They also serve as biomonitors for human health because the same toxic chemicals found in otters have also been found in people who eat contaminated fish.

The study published in the journal “Ecotoxicology and Environmental Safety” found high concentrations of chemical compounds in the livers of 23 otters in central Illinois.

Especially troubling were the highest concentrations of dieldrin ever reported in otters anywhere in the United States, said lead author Samantha Carpenter, a wildlife technical assistant at the University of Illinois, Urbana-Champaign.

Dieldrin is one of the organochlorine insecticides banned in 1978. More than three decades later, high levels of the chemicals remain in river sediments and accumulate in the fish that otters and people may eat.

The compound has been linked to neurological, behavioral and immune-suppression problems in wildlife. Scientific studies disagree on adverse human effects, but some studies have linked dieldrin to asthma, Parkinson’s disease, Alzheimer’s disease and breast cancer, Carpenter said.

While the study didn’t directly test concentrations in fish or sediments, the levels detected in the otters “are indicative of the levels in sediments and fish,” she said.

Illinois grows more corn than any other state except Iowa. Other Great Lakes states in the top 12 are Minnesota, Indiana, Ohio, Wisconsin and Michigan, according to the U.S. Department of Agriculture.

From 1953 until 1978, dieldrin was widely used on Illinois cornfields. At its peak in 1967, farmers applied such chemicals to 5.6 million of the state’s 10 million acres of corn, and it was used overall on almost 45 million acres between 1956 and 1977, according to the study. 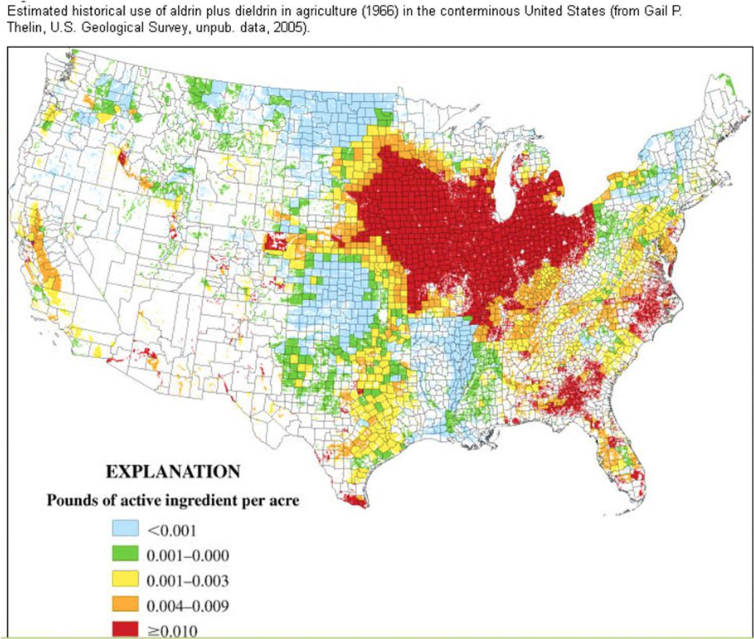 The otter study also found that levels of two other types of industrial compounds, polychlorinated biphenyls (PCBs) and polybrominated diphebyl ethers (PBDEs) are similar to or less than scientists found in otters elsewhere in North America.

The study said such compounds “are of global concern due to their environmental persistence, bio-accumulative potential and adverse effects on humans and wildlife.

Researchers based their findings on necropsies —animal-related autopsies — of 23 otters found by the Illinois Department of Natural Resources from 2009 to 2011. The animals had died accidentally, usually by being caught in traps intended for other animals such as beavers.

The College of Veterinary Medicine at the University of Illinois conducted the necropsies. Michigan State University’s Diagnostic Center for Population and Animal Health analyzed the liver samples.

At the time of the 1980s study, the river otter was an endangered species in Illinois.

Since then, however, otter has “made a comeback,” said Chris McCloud, the communications director at the Illinois DNR. “As wildlife managers, we created a trapping season to start to control their numbers to some extent.”

The state’s first trapping season in many years ran from November 2012 until March 2013 and yielded about 2,000 otters, McCloud said. The current season will end March 31.

The otter population is strong elsewhere in the Great Lakes region.

For example in Michigan, “their numbers have been increasing over the past several years,” said Doug Reeves, assistant chief of the Wildlife Division at the Michigan Department of Natural Resources.

He said the department has no concerns about overall threats to otter health and survival in Michigan, although “there are specific watersheds that are areas of concern — not only for otters — for any of the wildlife species that are living in those places, especially those at the top of the food chain.”

Carpenter, the study’s lead author, said, “One of our take-home messages for fish-eating animals is that exposure to the banned pesticide dieldrin may be greater in streams and rivers of the Midwest than elsewhere, given that it was used very intensively in the Corn Belt.

“While the concentration of dieldrin in Illinois watersheds was higher than previously thought, and higher than reported elsewhere in North America, there is no single all-encompassing benchmark we compare it with to say it is generally ‘high’” because of the lack of more research,” she said.  “We need to understand more about which watersheds are more heavily contaminated than others.”