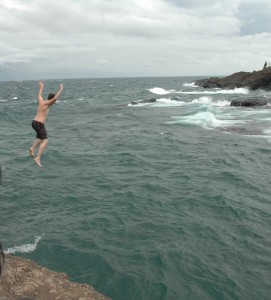 A young man dives off of the Blackrocks cliff edges. Photo: Becky McKendry.

There is no official website or club. There are no sign-up sheets, instructional tours or celebratory parades.

And still everybody in Marquette, Mich. knows the tradition of Blackrocks.

Blackrocks, the unofficial name given to the chocolate hued, rocky cliffs at Marquette’s Presque Isle Park lakeshore, hosts a tradition just as unofficial yet well known: cliff jumping, about 20-30 feet into the (sometimes frigid) waters of Lake Superior, sometimes right after the ice melts.

Danielle Reeves, 23, lived in Marquette from 2008 to 2010. Soon, coworkers at the hotel where she worked introduced her to the practice.

“I think it’s both tradition and a rite of passage,” she said. “It’s something that people of all ages do up there — and you will never run into anybody that hasn’t heard of it.”

Reeves spent as much time as she could at Presque Isle Park before leaving Marquette in 2010.

“Even if you weren’t going to Blackrocks to jump, it was still nice to just sit on the beach and relax,” she said. “There’s hiking, sightseeing, beaches — plenty of spots to just sit and watch the water. [It is] a very peaceful place.”

At least when you’re not at the edge, staring down into the water. 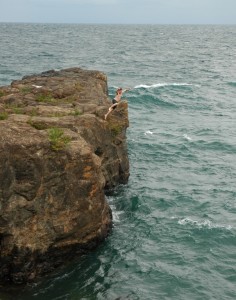 “I was so hesitant about [jumping] because it was something new to me,” said Reeves, who has since jumped twice. “But then I saw a little kid do it and I figured if he could, then I could… I got a great rush out of it.”

Daniel Zelenak, 28, has lived in Marquette since 2011 after transferring to Northern Michigan University. His first taste of Blackrocks came while surfing the university’s website on student life and spotting a picture of a student taking the plunge.

Zelenak heads to the area for hiking and biking a few times weekly in spring and summer; when the weather warms up, he sees people flock to the parking spots near the Blackrocks edges.

“On really nice days, it’s usually full of cars,” he said. “There are some erosion issues because so many people climb up to the rocks for jumping.”

Zelenak hasn’t yet taken the plunge, though.

“I definitely would,” he said. “I wish I had a good excuse as to why I haven’t done it before, but I simply just haven’t gotten around to it.”

Although some might wonder if safety is a good reason to stay on the shore, Marquette officials say that injuries and deaths are uncommon.

Marquette Fire Chief Tom Belt said that in his 19 years with the department, he has seen two deaths and about a half dozen injuries at Blackrocks. His department encourages any potential divers to follow basic safety precautions.

“We certainly always discourage diving headfirst,” said Belt. “The water levels change. And don’t go at nighttime, when you may not know how strong the water is moving. ” 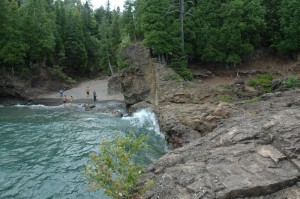 Divers at Blackrocks regroup on the shore before another jump. Photo: Becky McKendry.

Belt said that of the two deaths he recalls, one involved a slip and fall onto the rocks and the other was a nighttime incident where the water was moving forcefully and swept a young man away. He said that when the area is busy, police send a patrol car to check on the area periodically.

“It’s important to make sure you’re with people,” he said. “It’s good to have a buddy to look out for you because there are no lifeguards out there.”

And although Belt has never jumped himself, he said his own children have, and he knows how important the practice is for many in the Marquette area.

“It’s definitely a tradition for a lot of young people and students,” he said. “And generally they don’t have any problems.”

2 thoughts on “The unspoken tradition: cliff jumping at Marquette’s Blackrocks”