A team of scientists has assembled the sea lamprey genome, providing insight into how to control the invasive species that has terrorized the Great Lakes basin since the late 1800s.

That same research could help cure a rare disease in human newborns and further the study of degenerative brain disease.

Researchers said that decoding the lamprey’s DNA has revealed genetic factors that enable it to survive and thrive in the Great Lakes. 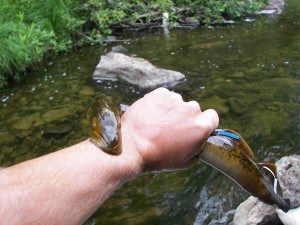 A parasitic sea lamprey takes a bite out of one of the genetic researchers. Photo: Michigan State University.

There are two types of lamprey native to the Great Lakes — silver lamprey and American brook lamprey.

“The American brook isn’t harmful to fish, but the silver is parasitic,” said Marc Gaden, spokesperson for the Great Lakes Fishery Commission. “As far as we know there’s no genetic difference — one simply has the bloodsucking mouth and one doesn’t.

“But can you modify the genes so that the lamprey never transforms from nonlethal larvae?”

There’s no definitive answer, but 59 researchers, led by Michigan State University’s Weiming Li, may find out now that they have mapped the sea lamprey genome.

Sea lamprey — unlike the silver and American brook species — come from the Atlantic Ocean,  accidentally introduced to the Great Lakes through shipping canals.

Like the native silver lamprey, sea lamprey are parasitic, with sharp teeth and a sucking disc mouth that allows them to feed on the blood of host fish. Also like the silver lamprey, they are harmless in their early stages of development.

Sea lamprey spend the first four years of their life as larvae in the soft bottom and banks of lakes or streams, according to the New York Department of Environmental Conservation.

As they mature, they change into the harmful predator threatening the Great Lakes today, said Yu-Weng Chung-Davidson, a senior research associate on Li’s team.

The genome project will hopefully prove useful in preventing the transformation.

Lamprey research on the horizon may also include a cure for biliary atresia, a rare disease in which affected human newborns are born without a bile duct, which eventually causes liver failure.

“Sea lamprey that transform from larvae to parasites lose their gall bladder and bile ducts,” Chung-Davidson said. “They develop an alternative mechanism in which their intestine starts producing bile salts instead, making healthy digestion possible.

“It’s a long shot,” she acknowledged. “But our genetic understanding of this in the lamprey might help. Maybe we can help find a cure for the biliary atresia.”

Scientists at the Marine Biological Laboratory in Massachusetts  contributing to the project have discovered that unlike humans, lampreys don’t have myelin — an insulating sheath around neurons that allows for faster conduction of nerve impulses. 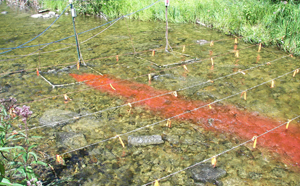 Field researchers set a trap for the sea lamprey in a stream where they are known to spawn. Photo: Michigan State University.

However, genes normally expressed in myelin were found to be expressed in the sea lamprey. In humans, myelin-associated molecules inhibit nerves from regenerating if damaged, but lampreys regenerate despite the same inhibitory genes.

Dr. Jennifer Morgan, one of the Laboratory researchers, said that this discovery could open the door for better understanding of human spinal cord injury and neurological diseases such as Alzheimer’s and Parkinson’s.

“There is an interesting conundrum,” Morgan said in a press release. “What are these myelin-associated genes doing in an animal that doesn’t have myelin, and yet is good at regeneration? It opens up a new and interesting set of questions.

“Addressing them could bring insight to why humans lost the capacity for neural regeneration long ago, and how it might be restored,” she said.

In the meantime, the Great Lakes Fishery Commission, which helped fund Li’s research, continues to control the lamprey with pesticide.

“But we need better, cheaper and more effective ways to do so,” Gaden said. “That’s why we fund this sort of research.”

During its life as a parasite, each sea lamprey can kill more than 40 pounds of fish. Aggressive sea lampreys prey on all species of large Great Lakes fish, including lake trout, salmon, rainbow trout, whitefish, chubs, burbot, walleye, catfish, and even sturgeon.

“Understanding the genome will help unlock weaknesses and manipulate the population,” Gaden added.

That’s exactly what Li’s team hopes to do.