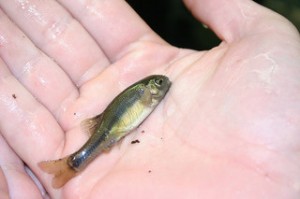 Fathead minnows raised in water from manure-tainted Indiana streams were more likely to be male than those raised in uncontaminated water. Photo: National Oceanic and Atmospheric Administration.

Baby fish exposed to hormone-laden manure from Indiana farms were much more likely to be male than those raised in uncontaminated water, according to new research.

The findings add to evidence that farm runoff may alter fish hormones and affect their reproduction and development.

Purdue University researchers raised fathead minnow embryos in water taken from two Indiana streams that are contaminated with natural and synthetic hormones from manure spread on fields. The embryos turned out 60 percent male; fish typically are born with roughly equal numbers of males and females.

Over time this skewing toward male fish could “drop fish populations,” said Maria Sepulveda, an assistant professor at Purdue’s department of forestry and natural resources and lead author of the study. She was quick to warn, however, that other factors — water temperature, nutrients and pesticides — also may influence fish gender.

Livestock excrete natural hormones — estrogens and testosterones — as well as synthetic ones used to bolster their growth. Depending on concentrations and fish sensitivity, these hormones and hormone mimics might impair wild fish reproduction or skew their sex ratios.

“This type of study was long overdue,” said Luke Iwanowicz, a research biologist with the U.S. Geological Survey who did not participate in the Purdue research. “Anytime you see skewed sex ratios and population effects, it’s concerning.”

The maximum hormone loads (from the manure to the streams) are taking place during the spring, which coincides with fish spawning, hatching and developing,” the authors wrote in the study, which was published online in November in the journal Environmental Science and Technology.

The agricultural streams also had 50 percent less fish diversity and a 28 percent higher adult minnow death rate than the creek with no farm runoff, according to the study.

Sepulveda said the lack of diversity and death rates in the agricultural waterways were expected given the poorer water quality and habitat.

But the increased male birth rates were surprising, and fish sex ratios are “too often overlooked,” said Thea Edwards, an assistant professor of biological sciences at Louisiana Tech University, “especially since we’re seeing more and more manure runoff and hormones in the water.” 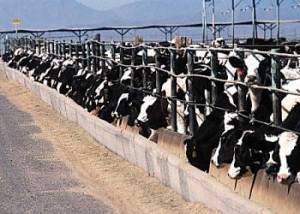 Nevertheless, there are some limitations to the connection the scientists found to manure runoff. While the study focused on hormones, the interaction of all contaminants could be linked to birth rates and fish diversity, Sepulveda said. And fish could have moved in and out of the sites, so it is unclear how frequently they were exposed.

The water from the agricultural streams had more testosterone than estrogen but researchers cannot associate any class of hormones with a specific birth outcome or developmental effect, said Ed Orlando, an assistant professor in the department of animal and avian sciences at the University of Maryland.

However, previous research supports a possible connection between the high rate of male births and the contaminated water.

The same synthetic hormone, trenbolone, detected at high levels in the Indiana streams was linked to an all-male population of zebrafish in a 2006 laboratory study by University of Southern Denmark researchers. In addition, a study led by Orlando in 2004 found male minnows in a stream near a confined animal feeding operation had lower than average testosterone and were sexually immature.

Researchers do not know, however, if wild fish populations in agricultural streams have skewed male-female ratios, and whether their fertility has been reduced.

Many animals are implanted with synthetic steroid hormones such as trenbolone, melengestrol and zeranol to make them bigger, improve breeding and increase milk production in cattle. And it works: In 1920, a chicken took about 16 weeks to reach 2.2 lbs., whereas now they can reach five pounds in seven weeks, according to a report from the National Association of Local Boards of Health.

But the practice has spurred controversy as consumer groups have expressed concern over synthetic hormones increasingly getting into food and water supplies.

The manure in the new research came from cattle, dairy, pig and poultry confined animal feeding operations, which are farms with large numbers of animals. In Indiana that means 700 dairy cows, 500 horses, 55,000 turkeys or other combinations.

Indiana has about 625 confined animal feeding operations, which produce 80 percent of the state’s livestock, according to the state’s Department of Environmental Management. 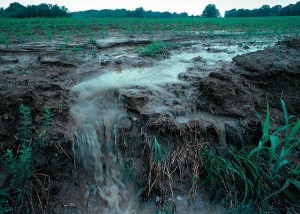 Depending on the type, such farms produce between 2,800 tons and 1.6 million tons of manure a year, according to a report by the U.S. Government Accountability Office.

Some livestock operations sell manure to nearby farmers to fertilize fields — an easy, useful way to get rid of it. Some farmers, including the ones near the streams in the new study, have drains to keep water in the fertilized soil at a desired level. When there’s too much water, it goes down the drain and gets into nearby watersheds.

Each state has its own regulations. Greg Slipher, a livestock specialist with the Indiana Farm Bureau, said that Indiana livestock operations are required to be set back from water — about 100 feet from most water and 500 feet from public water supplies.

Neither Slipher nor representatives from the American Farm Bureau Federation would comment on the new findings.

Iwanowicz, who said he was not speaking for the U.S. Geological Survey, said current regulations aren’t enough.

“We’re increasingly seeing biologically active chemicals getting into our water,” he said. “There is enough data to show that there should be more efforts to minimize that.”

Fish sex determination is complicated and it would be difficult to pin it on one thing, Edwards said. But policymakers should take notice, she said.

“We need to take a careful look at the agricultural practices we have in place, as there’s plenty of evidence that we’re destroying water quality,” Edwards said. “A 3-year-old could say ‘hey, this stream next to the farm does not look good’.”

5 thoughts on “Hormones from livestock operations may skew fish gender”