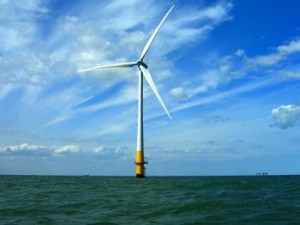 Lake Erie is among seven locations nationwide to receive new offshore wind investments from the U.S. Department of Energy.

The Lake Erie Energy Development Corp., a public-private partnership, could receive up to $47 million to install nine 3-megawatt wind turbines seven miles off the coast of Cleveland, Ohio.

The goal is to achieve commercial operation by 2017.

An offshore wind industry could mirror the success of land-based wind energy, according to a report by economic services group Navigant Consortium that was commissioned for the department.

“Last year, land-based wind power represented 32 percent of all new electric capacity additions in the U.S.,” according to the department’s press release. And “nearly 70 percent of the equipment installed at those U.S. wind farms — including wind turbines and components like towers, blades, gears and generators — is now from domestic manufacturers.”