One man said the beach in front of his home was covered with about 1,000 of the amphibians that were dead or dying.

“There was about one mudpuppy for every foot of beach,” said Tony Roach, a 22-year resident of Sarnia, Ontario. “When I went down there I thought they were mostly dead because it was the day after the storm.”

When he realized that many of them were still alive, he grabbed a snow shovel and moved 800 or so back into the water. Roach said he shoveled for a few hours until he was exhausted.

Several other people living around the southern tip of Lake Huron also reported dead mudpuppies that washed ashore in the days following the storm.

“When I was walking our dogs on the beach I counted 40 in front of our home and the two houses just south of us,” said Barbara Stimpson, a resident of Fort Gratiot Township, Mich. which borders southern Lake Huron.

Five miles south of her, another Michigander found more than 50 dead mudpuppies washed ashore within 100 feet on Lakeside Beach in Port Huron.

“I’ve lived in Port Huron my whole life and I don’t think I’ve ever seen a storm like this with such huge waves,” said Dave Dortman, a former environmental quality analyst for the Michigan Department of Environmental Quality.

The waves on Lake Huron were hitting 23 feet before the weather buoys stopped reporting, Dortman said. “I think it was just the physical agitation of the water that tumbled the mudpuppies and ended up killing them.”

But experts are puzzled. They are hesitant to pinpoint the storm as the direct cause of death because there is no precedent for a mudpuppy die off from severe weather. 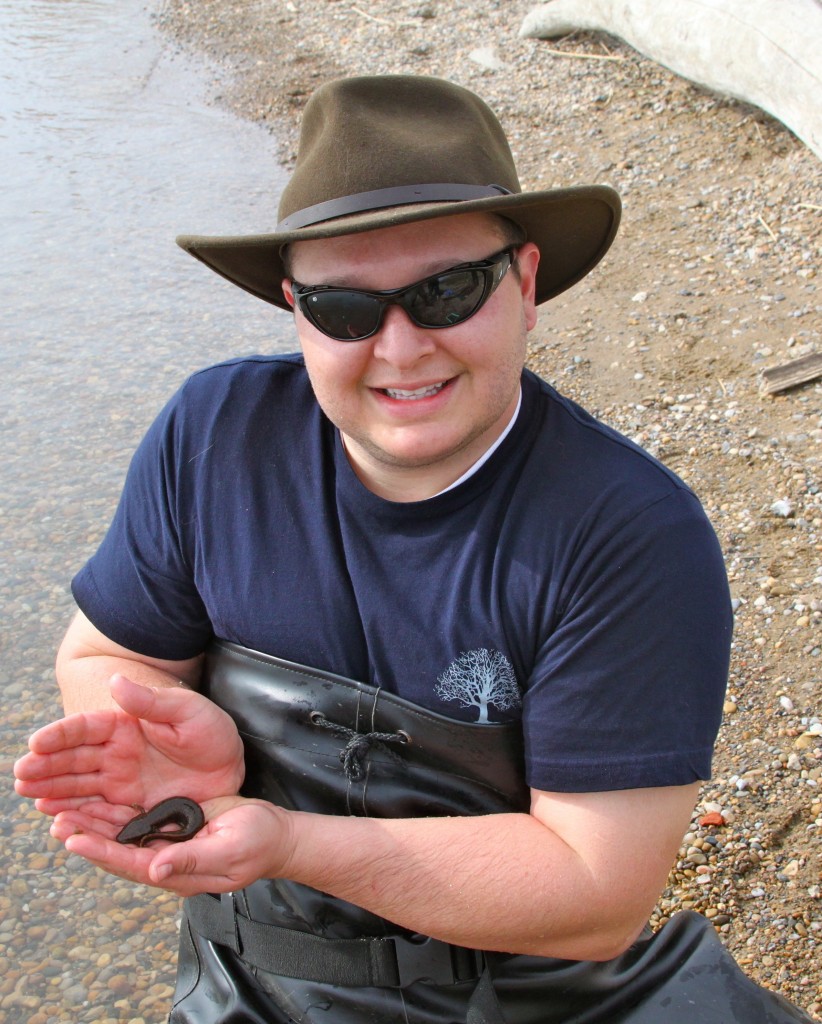 And the mudpuppies appear to be the only aquatic species that washed ashore in great numbers after this storm, said David Mifsud, project administrator at the Michigan Herpetological Atlas, an effort by the Department of Natural Resources and Herpetological Resource and Management to collect data on Michigan’s amphibians and reptiles.

“The database is still relatively young,” Mifsud said. “We just launched it this year and are trying to use as many social media outlets as we can to get people to contribute.”

Mudpuppies are native to the Great Lakes and can grow up to 19 inches long, making them the largest salamander in the region, They live in the water and have reddish external gills that some people say resemble a dog’s ears, Mifsud said. They have broad, flat heads, stubby legs, beady eyes, and are extremely slimy. Their bodies are brown or bluish-gray with blue or black spots.

Mifsud has been surveying mudpuppies since the population started tapering off in 2003 from diseases like botulism and the growing use of lampricides, a chemical that kills the larvae of invasive sea lamprey that is also toxic to amphibians. 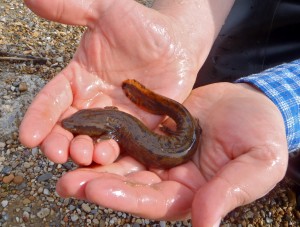 “Most of the die offs we’ve seen in the past have been because of known contaminants and diseases,” Mifsud said. “Storm related die offs are something that are relatively new to us.”

Some experts believe it could more likely be a combination of causes.

“It’s certainly credible that a heavy rain event could wash various pollutants into the water and cause problems,” said Jim Harding, herpetology specialist at the Michigan State University Museum in East Lansing, Mich. “But if they’re finding bucket loads of these things on the beach there must be more going on than just high winds and rain.”

Dortman, a hobby biologist, speculates that the storm’s unique effect on mudpuppies could have been a result of their slow-moving nature and affinity for shallow water.

“Fish have the ability to move quickly, whereas a mudpuppy is kind of a docile creature that tends to seek shelter underneath debris,” he said.

No matter the reason for their demise, the reports are disconcerting. “These big die offs are certainly of concern whether they’re weather related or not,” Harding said.

Part of the frustration in studying mudpuppies is that there hasn’t been significant data collected on the species beyond the Michigan Herpetological Atlas, Mifsud said.

“A big challenge for studying nongame species is finding the funding to cover those costs,” he said.

Some anglers mistakenly believe that mudpuppies eat game fish, which makes them unpopular in some circles.

On the contrary, they have been observed feeding on invasive species like round gobies, rusty crayfish, and possibly zebra mussels, Mifsud said.

Until the money comes rolling in for mudpuppy research, Mifsud hopes that through citizen participation the staff at the Michigan Herpetological Atlas will be able to better identify the areas where mudpuppy populations are suffering and further understand the risks they face.

“Because it is such a cryptic species, we often only learn about them after they’re dead,” he said.

People who have observed similar die-offs or have other unusual observations of amphibians or reptiles in the Great Lakes region can report them on the Michigan Herpetological Atlas website. The species and animal group must be included for a complete report. If possible, include details about weather and sky conditions, time and location found, quantity and body temperature.

For step-by-step instructions on how to submit a report, click here.

And keep us posted on Echo in the comments below.

4 thoughts on “Are Great Lakes mudpuppies victims of hurricane Sandy?”