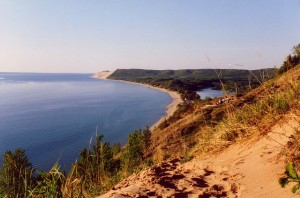 LANSING — New research findings about the geological and archaeological aspects of the Lake Michigan coastal dunes may help local governments and organizations protect them.

“It’s important to make sure we haven’t damaged or destroyed dunes in an archaeological site,” said Dean Anderson, state archaeologist for Michigan. He said information about dunes in the past concerns not only cultural but environmental methods.

The most recent research collected data on the northern and northeastern shore of Lake Michigan, while former studies focused mostly on the southeastern part of the basin. It gives a full picture of locations for dunes among the state.

“We studied the dynamic of dunes,” said Alan Arbogast, a geographer at Michigan State University. “The ways people establish landscape and interact with environment in the past help us know the geological age of dunes.
“One thing we learned is that dunes tend to be much younger.”

Arbogast said the average age of Michigan’s dunes is 1,000 years. Scientists previously believed most of them were more than 5,000 years old.

“That means those sands are much more sensitive than we thought and can move easily and quickly,” he said.
He is the co-author of a new book, “The Geoarchaeology of Lake Michigan Coastal Dunes” (Michigan State University Press, $35.95).

The discovery about dunes has implications for how they are managed in the face of pressure from development, tourism, invasive species and changing water levels in the Great Lakes.

“Dunes are managed for people around the state,” said Arbogast. “Three million people go to the dunes every year – that is a third of Michigan’s population.”

Arbogast said state law identifies critical dune areas and regulates construction in them. “Those are some of the best developed dunes,” he said.

Each dune zone has its own management rules. Arbogast said Van Buren and Allegan counties do a good job in dunes protection.

The Duck Lake State Park defined itself as a day-use park to avoid additional damage to its towering sand dunes. Silver 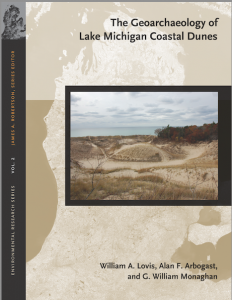 Lake State Park allows vehicles to access dunes, which, according to Arbogast is “fun but bad for the dunes.”

“We have a 61-acre dune area,” said Manny Valdez, supervisor of Charles Mears State Park. “We need make sure there is no other development on or near the dunes.”

He said, “And we keep monitoring invasive species in the area.”

“Interaction between people and the environment is one of the most important methods that influence landscapes,” said Anderson, the state archaeologist. “The damages depend on the kind of resources people pursue from the environment.”

Joy Gaasch, president of the Grand Haven Chamber of Commerce, said, “Certainly we have a lot of dunes so there are a lot of visitors from outside the community.

“It identifies the quality of life,” she said.

She said Grand Haven has zoning regulations for dunes areas, and “no business can get involved in that area because the dunes have been preserved.”

Arbogast said he’s been involved in cases in Muskegon and Manistee counties where there are rules about dunes protection “but people who own the land still want to build a house or other construction on dunes.”

Local governments set up regulations to limit the number and size of houses along the shore. They try to convince residents by hiring geographers like Arbogast. He said, “What I can do is to tell them as a geographer what will happen to the environment if they do so.”

“People use dune sand to build engine models for vehicles because it’s good quality,” he said. “Cars are important to Michigan. Some of the dunes are used in this way to support our industry.”

He said people can make money by exploiting dunes and it’s difficult to stop them from profiting. “That’s the biggest problem of dunes protection and management.”

According to Anderson, the state still has a long way to go in dunes protection, and public education is needed.

“It’s always helpful to raise public concerns so some people and experts can force legislators to make decisions and, in this way, come out with policy and legal protections,” he said.