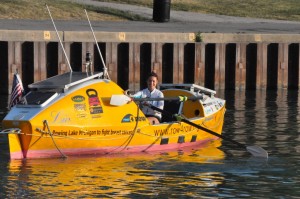 A Chicago woman who was sexually assaulted while rowing around Lake Michigan for charity insists on continuing the journey.

Jenn Gibbons was 37 days into her journey to raise funds and awareness for breast cancer survivors when a man boarded her boat while she slept in the early morning hours July 22 and sexually assaulted her, police said.

The assailant is still at large.

The Chicago Sun-Times reports that the police believe the man targeted Gibbons, and may have traveled a long distance to where she was docked on a secluded shoreline in Mueller Township, in Michigan’s Upper Peninsula. He may have used Gibbon’s blog, where readers where could track her daily progress and location. That link is now down.

Gibbons is refusing to give up and released this statement on her blog just days after her assault:

“Regarding the trip, one thing hasn’t changed: I’ve still got this. But the trip plan will change in a few ways to ensure my safety…Most importantly, I will no longer be alone.”

Because her safety on the water cannot be assured where she’s at, Gibbons is tackling some of the miles back to Chicago on bike. She’ll get back on the water in Muskegon, Mich., and finish the journey like she started it — by rowing. The area between Muskegon and Chicago is more densely populated and has more harbors.

Her determination to continue is matched by the strength to go public with the sexual assault. “To go through this at all, 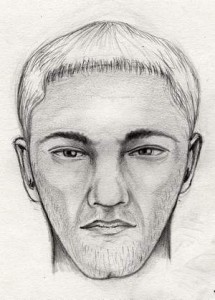 let alone publicly, is extremely difficult,” she said. “I chose to talk about it in the hope that someone might be able to provide more information about the person who did this to me.”

The Michigan State Police said the assailant is a white male with light eyes, average to athletic build and shorter

well-groomed hair. The suspect is in his 30s and is around 5-feet-8 to 6 feet tall. A bright yellow Jeep Wrangler that has a spare tire on the back with a yellow smiley face on it was seen in the area.