Two adventuresome bicyclists launch their plan to circle the Great Lakes on Tuesday.

Kris McNeil, 26, and Zach Chase, 25, who both graduated from the University of Minnesota Duluth in 2010, will begin the 5,300 mile journey in Duluth, Minn., returning home Aug. 5.  They will travel through two countries, eight states and about 20 major cities. 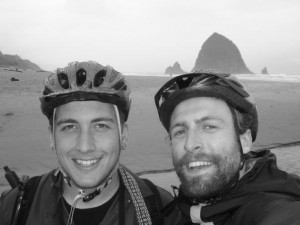 “We will be traveling north from Duluth heading around the Canadian shores first,” Chase said. “When we get to Quebec City, we will cross the bridge and begin the southern United States shores.”

The first few days of the trip will be documented by friends from Vika Films.  Then they will shoot the rest of it themselves.

McNeil and Chase did a west coast bike trip in 2008 which took them a month to travel 1,702 miles through Washington, Oregon and California. The first 14 days it rained. The pair wrote journal entries on that trip which can be found on their Facebook page.

McNeil said that he did most of the planning of that trip.  Chase decided to join him at the last minute.

“We really didn’t know what we were doing,” McNeil said. “We had a plan but did not have any campsites set up.”

Although the west coast trip was good practice, the Great Lakes venture is much longer.

They have gotten over 7,000 webpage views and 460 likes on their Facebook page for the Great Lakes trip.

The inspiration for the Great Lakes trip came during their west coast bike tour.

“We were sitting in the mountains as our trip was coming to an end and we asked ourselves, ‘How can we do this back home?’” McNeil said. 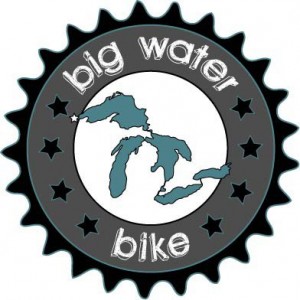 Instead of just deciding to bike around Lake Superior, the two decided to do it big and bike around all of the Great Lakes.

Chase got the ball rolling in November 2010 and the two have been planning for the past year and a half.

They mapped out a website and their route. They decided to get business cards to make their trip more official among potential sponsors and other interested parties.

To gain credibility and help with expenses they decided to get sponsorships. During their first six to eight months of planning they only had four local sponsors. Since then, they have been able to secure several national sponsors. They have received an endorsement from Duluth Mayor Don Ness and sponsorship by the Sierra Club of Chippewa Valley, Wisc.

Endorsements are people that are helping to support the trip with their social status and clout. Sponsors are people and groups that have donated product or financial support.

They estimate the cost of the trip between $3,000 and $5,000, including camera gear. Film production costs may make that higher. Sponsors contributed about $2,000.

McNeil said that first and foremost, they are doing the trip for “us.” Both are very active outdoor people. Chase is an avid mountain climber.

“There is a sense of adventure we are seeking,” McNeil said.

The sense of the unknown and leaving home makes Chase a little nervous.

“Leaving all of your friends and family behind can make you a little homesick at times, but that eventually goes away and we also have a great relationship with each other so that helps as well,” Chase said

They hope that their documentary will help the public have a greater knowledge of the entire Great Lakes region, McNeil said. A person living on Lake Erie might not have knowledge about Lake Superior.

Another goal of the trip is to promote bike touring as a means of exploration and travel.

To prepare, they go to the gym several times each week.They bike as much as 80 miles a day while pulling trailers weighing 35 pounds when full with their gear.  On their trip they will average about 60 miles a day.

The two plan on picking up food along the way at mini marts.

There are still unknowns, despite all of their planning.

They are bringing maps and a GPS, but they have never been to these areas before so they really don’t know where they are going. They are carefully planning their route through major and sometimes dangerous cities like Chicago and Detroit.

“We have learned how much people are easily willing to support you, to bike with you, to give you a place to stay, to give you food,” McNeil said.

The two also hope to figure out their lives on the trip and get a sense of self-discovery.  McNeil is the event director for Fitger’s Brewhouse in Duluth. Chase is with the Conservation Corps of Minnesota in Duluth. After the trip is over, Chase wants to get his graduate degree in outdoor education.

A friend, Matt Brown, said the two love being outside.

If they were to jump out of an airplane and disappear for three months, chances are they would survive in the wilderness, Brown said. They are far more prepared for this trip then for their 2008 west coast trip, which was more about proving  that they could do a long bike trip, he said.

“Nothing will stop these guys.”

To find out more about the trip head over to bigwaterbike.com.

One thought on “Duluth bicyclists to circle all five Great Lakes”