A new method of battling the blood-sucking sea lamprey involves an unlikely odor: the smell of its putrefied flesh.

The U.S. and Canada spend about $15 million a year controlling the eel-like fish, which started sucking up the bodily fluids of native Great Lakes fish in the 1940s.

But a biological repellent made from dead lamprey could corral populations of the vampire fish into certain waterways, allowing agencies to get more bang for their buck with costly pesticides.

Spawning sea lamprey are attracted to the smell of baby lamprey; it’s a useful cue to them, said Michael Wagner, a Michigan State University assistant professor of fisheries and wildlife. 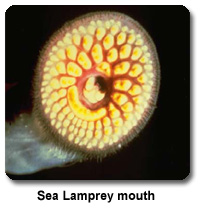 In the same way, the noxious smell of death acts as a stoplight, he said. Lamprey smell death, panic and swim away.

Sex pheromones are huge attractants for lamprey and have been used for years. But this is the first time researchers are identifying and extracting the chemical in lamprey stink to make a viable repellent.

Releasing the odor into all waterways wouldn’t work, said Wagner, who partnered with New Jersey-based biological repellent company SharkDefense. The lamprey would eventually get used to it. But by blocking certain waterways – like where two rivers diverge – the vampire fish would naturally avoid the smell of death.

“We can get into the real benefit of ecosystem-based management,” he said. “Now we can pick and choose which stream they can get into. We can be protective of resources.”

Another upside to the method – the smell is easy to produce in large quantities, Wagner said. The goal is to liquefy the stink of a dead lamprey by dipping the fish into hot ethanol.

“The effectiveness of the odor combined with the ease in which it’s obtained suggests that it will prove quite useful in controlling sea lampreys in the Great Lakes,” he said in a prepared statement.

It will take time to figure out how to effectively use a viable repellent in Great Lakes waterways. Wager recently published an article on sea lamprey odor in the current issue of the Canadian Journal of Fisheries and Aquatic Sciences.

A repellant for sea lampreys could be the key to better controlling one of the most destructive invasive species in the Great Lakes, says a Michigan State University researcher.