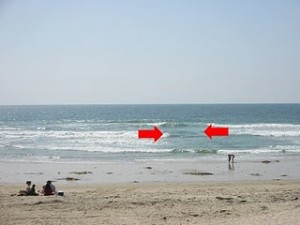 The Great Lakes can have ocean-force rip currents. Photo: NOAA.

The 19-year-old reportedly dove off the pier at Silver Beach in St. Joseph, Mich., and became the 10th person in 2011 to drown in the Great Lakes.

Such Great Lakes fatalities prompted Dave Benjamin, of Chicago, and Bob Pratt, of East Lansing, Mich., to create the Third Coast Ocean Force, a project to save lives by creating rip current awareness.

A rip current is a strong, usually narrow surface current flowing outward from a shore. It results from the return flow of waves and wind-driven water. In Burton’s case, there were only 2-foot waves and 13 mile-per-hour winds.

“A lot of people think they can’t drown in lake waves,” Benjamin said. “The Great Lakes can have ocean-force rip currents under windy weather conditions.”

The group’s activity on Facebook is already proving to be effective. Ellen Warren of Oak Creek, Wisc. commented on a link regarding Burton’s death:

“Having lived most of my life near Lake Michigan, and swimming [there] many times, I have to admit that I was really unaware of the strength that the lake currents can have,” she said on the social media site.

“The more I learned, the more I realized we don’t know anywhere near what you would think we know about rip currents in general and drowning incidents,” he said.

In fact, no official agency seems to be counting them. This realization prompted Pratt to begin collecting data independently in 2007.

Some states and counties have different criteria for classifying a drowning, he explained. For example, in Michigan, if an individual dies within 24 hours of a submersion incident, it is considered a drowning, but this categorization criteria isn’t consistent across the Great Lakes region.

Two friends reportedly tried to pull Burton to safety, but were unable to pull him out because of the currents, according to WNDU. 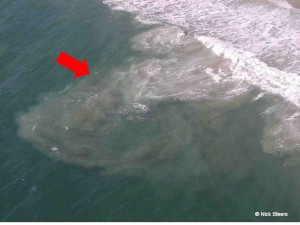 An eagle-eye view of a rip current. Photo: NOAA.

“There are hardly any lifeguards at beaches anymore,” Pratt said. “We need people who can rescue when others are in danger. Someone has to be the missing link between those in danger and professional rescuers, because it only takes a couple minutes [to drown].”

Surfers in particular are able to safely travel to a dangerous area and assist those in danger. Sunday begins the National Weather Service’s annual Rip Current Awareness Week. That day, the Third Coast Ocean Force will launch what they hope to be a series of surfboard rescue technique classes. The first is in St. Joseph, Mich., Benjamin has already been approached to host another class in Frankfurt, Mich. in July.

The Third Coast Ocean Force Facebook group has more than 203 members. The project has created event pages on the social media site — one to spread the word of the June 5 event, and one to alert members of dangerous beach conditions through public service announcements. When rip currents are particularly unsafe, the group  sends an update to encourage everyone to be extra cautious at the beach.

The National Oceanic and Atmospheric Administration’s daily hazardous weather outlook mentions rip currents if they are of particular concern. Signs of  a rip current include a break in the incoming wave pattern; a channel of churning, choppy water; a line of foam or debris moving seaward; and a difference in water color, according to the Michigan Sea Grant. Beachgoers should never swim alone, always swim in an area protected by lifeguards, follow the recommendations of lifeguards and always be alert, said a lifeguard on NOAA’s website. In addition, NOAA advises that when caught in a rip current, the swimmer should swim parallel to the shore instead of against the current – float or tread water if this is not possible. WZZM has a video that further explains safety methods.