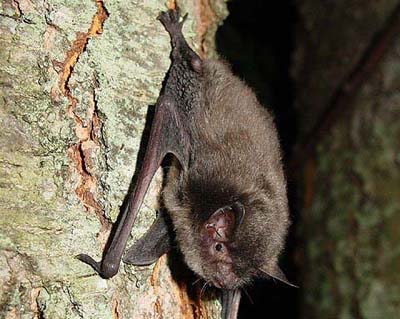 In two years, white-nose syndrome could be in MIchigan where it would threaten Michigan’s only endangered bat species, the Indiana bat. Photo: US FWS

LANSING — Michigan’s bats are under attack — not from tennis racquet-swinging bat swatters or vampire-hunters but principally from a deadly fungus with the potential to disrupt the ecosystem.

Eastern Michigan University biologist Allen Kurta said the disappearance of bats, which play a crucial role in controlling crop and forest pests, would raise a major question: “How will it affect our agricultural economy and forest economy?”

Bats are largely unappreciated by the public, said Patrick Rusz, director of wildlife programs at the Michigan Wildlife Conservancy in Bath, although “they eat way more mosquitoes than the much-celebrated purple martins that people have been putting up houses for.

“It has a trickle-down effect through the whole ecosystem,” Rusz said.

Their appetite for bugs has major implications for Michigan agriculture, according to Rob Mies, director of the Organization for Bat Conservation based at the Cranbrook Institute of Science in Bloomfield Hills.

“Bats are the primary predators of nighttime insects,” including moths and beetles that damage corn and other commodity crops, Mies said. “With less bats, we have more insects, which means more pesticides.”

They also eat ash borers, the beetles that are devastating the state’s ash trees.

Michigan is home to nine bat species, some common, others rare and one — the Indiana bat — classified by the U.S. Fish & Wildlife Service as endangered. All are legally protected.

Most of the state’s large cave-dwelling bat populations are on private land in the western Upper Peninsula, where they roost and hibernate in abandoned mines that provide the proper mix of temperature and air circulation.

The state has few natural caves, but hundreds of abandoned iron, gold and copper mines are accessible to bats, said Bill Scullon, a Department of Natural Resources and Environment (DNRE) wildlife biologist based in Baraga.

Scullon said major challenges include identifying the locations of former mines, which may be “out in the middle of nowhere sometimes,” or a mere “crack in the hillside,” and the safety hazards of getting inside to monitor their bat populations.

In the UP, the Millie Hill Mine in Iron Mountain and the Caledonia Mine complex near Rockland are major “hibernacula,” or hibernation sites, for an estimated 85,000 to 100,000 bats, many of which migrate there in the fall from hundreds of miles away.

The only major Lower Peninsula hibernation site is at Tippy Dam in Manistee County between Wellston and Brethren. It has an estimated 16,000 to 20,000 bats during winter hibernation season.

Eastern Michigan’s Kurta, the author of “Bats of Michigan” (Indiana State University Press), said cave closings can eliminate crucial habitat and, if done at the wrong time, could entomb those already inside.

DNRE works with county mine inspectors and private landowners to install gates that allow bats access to abandoned mines but keep people out.

The cave-dwelling bats are threatened while they hibernate by a fast-moving disease known as white-nose syndrome. The fungus grows on the animals’ ears, wings and nose.

Mies said, “The fungus doesn’t kill them but wakes them or keeps them awake.” As a result, infected bats are use more of their stored body fat and starve to death.

“Sometimes you’ll get an environmental scare and scientists aren’t sure what will happen,” he said. “Here they know what’s going to happen: You’ll end up with a lot of dead bats.”

Nationwide, white-nose syndrome has wiped out an estimated 1 million bats since it was initially seen in a New York cave in 2006. Since then, it’s been identified in 14 states and two Canadian provinces and is moving westward.

Experts warn it could reach Michigan in the next two years, being spread both bat-to-bat and by human tracking the fungus into caves and mines on their shoes.

In New York, state health officials recently announced the discovery of drugs and antiseptics that can treat the fatal fungus and decontaminate infected areas.

However, Kurta is wary of how feasible it will be to implement any such discoveries.

“There have been various attempts at seeing whether topical applications can kill the fungus,” Kurta said. “In reality you’re dealing with hundreds of thousands, millions, of animals. Who’s got the time and money to apply a topical fungicide to a million bats?”

“Wind energy companies and individuals researchers are looking at ways to reduce those impacts, including placement, spacing between turbines, slowing or stopping turbines during low-wind periods or acoustic deterrents,” Carver said.

Tree-roosting species, like the Indiana bat, also are in jeopardy when the large dead trees they favor are removed and their habitat is disturbed in other ways.

Carver said that despite their biological importance, much about bats remains unknown. He works with rare species in swamps and bottomland forests, studying such questions as how bats choose where to roost and how long they live.

“White-nose syndrome has brought attention to the fact that there’s “a lot of basic information about the life history of bats that we don’t know,” Carver said.