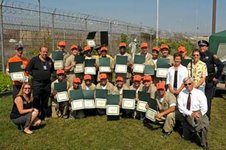 James Jiler says the more time prisoners spend in the garden, the less likely they are to repeat an offense.

The author and activist has spent years advocating for the benefits of prison horticulture, including making inmates more marketable when they get out.

“People are less likely to go back to prison if they come out of it with an education,” Jiler said. “I want them to go home with a skill, and find a purpose in life that is better than making license plates, and learning how to care for the earth is a huge therapeutic benefit that people need.”

Jiler is the founder of the Greenhouse Project, a “jail to street” horticultural training program in the New York City’s Rikers Island Jail system. He also developed the Green Team, a group of released prisoners who work on landscape and gardening projects throughout New York.

“In six months they could call plants by their Latin names and knew much more about plants than 99 percent of New York City,” Jiler said. “Some people got $30,000 a year jobs.”

Similar programs have been started throughout the country. The Cook County Jail outside of Chicago has a garden covering 10,000 square feet. The University of Illinois offers the inmates a master gardener’s certificate upon completion of a 60-hour program. This past September, 36 certificates were awarded.

Horticulture in jails and prisons isn’t new. Decades ago prison farms grew food for inmates and were designed to establish a strong work ethic among them, said Jiler, who wrote “Doing Time in the Garden,” a book on the history of prison horticulture and his experiences working with inmates. By the 1920s most prisons in the south were modeled after slave plantations.

The program can also serve community needs, Jiler said. The Green Team has planted gardens at schools and libraries throughout the city. They also created hammocks out of recycled fire hose for the animals at New York zoos.

And Cook County’s garden donates all of its food to local food pantries.

“They can see how they grew all this food and now it’s going to a food pantry that could have served a community they lived in,” said Lisa Gordon, a spokeswoman for the Cook County Sheriff’s Office.

While the number of small programs rise, Jiler worries that many of the larger prison farms are being cut due to economic constraints.

Florida’s budget crisis threatens that state’s prison horticulture systems, he said.  And the Correctional Service of Canada is phasing out the country’s six prison farms by 2011, according to Canadian news reports. The correctional service claimed it was no longer as practical as other vocations.

Prisons have a large stake in the U.S. economic and political systems. The 2008 federal budget included $5.4 billion to the Bureau of Prisons, including $169 million to expand capacity.

“We have over 2.2 million people incarcerated and we are number one in the world,” Jiler said. “We spend more on our prison system then education; these are real issues.”

The New York Times reported in 2008 that the U.S.  houses a quarter of the world’s prisoners. The same year, the Pew Center reported that Vermont, Michigan, Oregon, Connecticut and Delaware spent more on prisons than higher education, and the ratio of prison to education spending was increasing.

Instead of cutting garden programs to save money, Jiler suggests growing food is an economic benefit. “Its good for the taxpayers wallet and the communities that these people are released into.”

The Lorain County Jail near Cleveland started a garden in June. Tomatoes, peas, zucchini, cabbage and beans were harvested for inmates’ meals.

“We had 445 inmates in 2009 as a daily average population,” said Rich Resendez, a captain at the Lorain County Sheriff’s Office. “You take that and multiply that by three times a day for 365 days a year and that’s just under a half a million meals a year. Those meals are paid for with the taxpayers’ money.”

Prison garden advocates say that security concerns are addressed by allowing only nonviolent offenders to participate.

“Over 90 percent of the participants’ offenses are drug related,” Gordon said. “The area is also fenced with razor wire, and they are supervised by correctional officers.”

Jiler is establishing the American Prison Horticulture Association and says that strong arguments for these programs are found in the people he has kept from going back to jail.

He recalls a drug addict and con artist who had spent more than 20 years in and out of prisons. After going through a prison garden program, she went to work for a landscape design company. Another, a prostitute and drug addict who had been arrested more than 195 times, hasn’t been back to prison in the three years since she went through the horticulture program.

“The reality is that very few people are serving life, and they are going to be coming home,” Jiler said. “Do you want them to come home angry, bitter and unemployed, or with a change?”