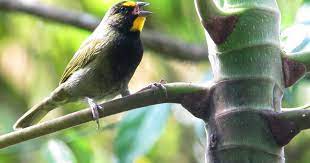 A federal grand jury has charged a Madison, Wisconsin, man with illegally trafficking in yellow-faced grassquits.

The grassquit is a small bird that lives in grassy and weedy subtropical and tropical areas such as Mexico, Central America, the Caribbean, Puerto Rico, Colombia and Ecuador, according to eBird.org. The International Union for Conservation of Nature’s Red List classifies it as a species of least concern.

The indictment accused Jorge Iglesias of selling the birds in violation of the Migratory Bird Trafficking Act, which makes it illegal to “sell, offer for sale, barter or offer for barter any migratory bird.”

The indictment alleges that Iglesias offered to sell two yellow-faced grassquits in April 2020, two in May 2020 and one in December 2020.

Iglesias pleaded not guilty as his arraignment, and a trial is scheduled for March 2023, according to court records.

The crimes carry a maximum sentence of two years in prison.

Defense lawyer Alexander Vlisides of the Federal Defender Services in Madison said Iglesias is not in custody.

Although the U.S. Attorney’s Office went public by issuing a press release about the indictment, that office, the U.S. Fish & Wildlife Service, the Wisconsin Department of Natural Resources and the Florida Fish & Wildlife Conservation Commission declined to answer questions about the case.

Unanswered questions included whether any other suspects have been charged as a result of the investigation, whether the case is related to Miami-area bird smuggling rings and the fate of the birds.

The U.S. Attorney’s office referred Great Lakes Echo to the Fish & Wildlife Service, as did the Florida commission and the Wisconsin Department of Natural Resources, both of which participated in the investigation.

“Fish & Wildlife is the lead agency, so we are deferring to them. I hope you receive a response from them soon,” commission public information coordinator Ashlee Brahier Sklute told Great Lakes Echo in an email. At the Wisconsin DNR, public information officer Joanne Hass said, “I provided your inquiry to the U.S. Fish and Wildlife Service out of Minnesota – as they are the lead and are the spokespersons for their case.”

A jury trial is scheduled for March, according to court records.